Channel 3 sensation Pakorn Chatborirak on his soap opera success, being an outrageous prankster while an introvert at heart and why he's the man you want around if you catch a cold

published : 27 May 2012 at 00:00
newspaper section: B Magazine
writer: Sasikwan Srikrachang

Pakorn ''Boy'' Chatborirak is one of Channel 3's most popular actors, a soap opera heartthrob whose signature facial stubble suggests (correctly) a mischievous nature and a one-time Cleo magazine man of the year. He's just finished wrapping up one prime time series and another starring him is about to begin. He's a superstar in his prime by any definition and ... a pharmacist? 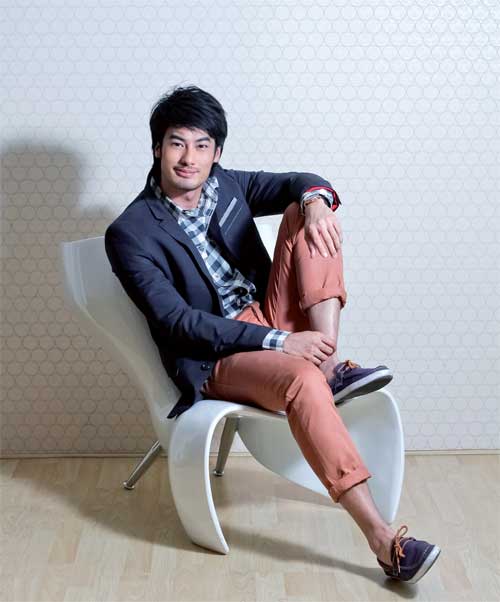 That's right. Boy wasn't always a soap star and his early experiments with pharmaceuticals were _ perhaps unlike those of some of his fellow showbiz alum _ controlled in classroom settings. He studied to be a pharmacist at his mother's prompting before working as a licensed one in Chiang Mai and at a health centre in Bangkok.

''The thing I loved most was trying to figure out what was wrong with people and the feeling of helping them. I was very content when they left the store, hoping that they would get better,'' he says. ''I'd like to do it again and open a pharmacy but I would definitely not give up this career. For now I'll just be the one to recommend medicines for people on set.''

It's doubtful that Boy will have the opportunity to get back to his unusual non-showbiz roots any time soon. In fact, pinning the actor down for a chat proved a tough mission in itself with five postponements over three weeks before he was finally able to meet with Brunch.

''I'm sorry about this. As you know I've been extremely busy,'' says Boy. And he wasn't kidding what with shooting concluded on the soap, Waew Mayura, (the name taken from that of Boy's female love interest in the show), and his new drama, Tawan Chai Nai Man Mek (Sunshine Through the Clouds), set to air later this year.

''Waew Mayura took about eight months to shoot due to some significant changes to the script and last year's floods which delayed our production by several months as well,'' he says, looking worn out. But his eyes brighten when he says that the final scene will be filmed the following day.

Shooting for the finale of Waew Mayura, which airs this weekend, were completed just two weeks ago.

With such a hectic schedule, perhaps some time off is in order? The donning of the white pharmacist's coat once more?

Tawan Chai Nai Man Mek will be a romantic comedy TV series starring Boy as a good-natured pianist. ''I play the lead, Mek, a funny optimistic guy who loves his family and worships the woman he loves. But there's a twist when the girl he loves leaves him to marry his brother.

To make things believable, Boy had to learn the piano. ''Well, just a couple of songs. Luckily, I don't have to sing too,'' he says, chuckling. ''Just learning piano that quickly was hard enough for me.''

That might seem surprising coming from Boy, who recently sang in Channel 3's 4+1 Superstar Concert. But he says that singing and dancing just aren't for him.

And neither, he says, was acting until he met his guru in showbiz, Pongpat ''Aof'' Wachirabunjong.

''As a friend, he's really cool to hang out with. He looks after you like a brother and as a mentor he has helped me improve in terms of my acting and understanding the entertainment business. I owe him a lot.

''He's a singer, an actor, a director, a producer, and a footballer. The more I get to know him, the more I respect him.''

Only five years in the business, Boy established himself as one of the most sought after dramatic leading men and commercial presenters. Although he's been dubbed a prankster by the media, Boy insists that his mischievous nature came from a core of shyness.

''I'm really shy and a bit reserved, to be honest,'' he says. ''For example I'd be too shy to start a conversation with someone. Parties or big functions are not comfortable for me and in those situations I'd choose a quiet corner and listen to music.

''That's how I really am and when I entered showbiz I had to adjust,'' he says. ''People would get the wrong idea about me and think I'm conceited or something like that. I was really shy and afraid they wouldn't like me, but they didn't know that.

''But now I'm a completely different person. To my close friends I'm a crazy, funny guy.''

Would prankster be the correct term?

And he's not alone. There are plenty of females in Boy's pictures striking similar silly poses.

''The one who appears most frequently in my funny photos is Margie [his regular soap costar Rasri Balenciaga] because we're so close and she's not shy or embarrassed,'' he says. ''No matter who I take a photo with I always let them know that it's on Instagram. But I still haven't had the courage to ask Marie [his Waew Mayua co-star] to pose for one.''

Like many in showbiz, Boy's career began with modelling and video gigs before landing the leading role in Fun Waan Aai Joob (Sweet Dreams, Shy Kisses). His career really took off in 2008, though, when Cleo magazine named him its ''man of the year'' and he was signed around the same time to Channel 3.

His modelling experience and a short stint in film didn't help him in television dramas. ''When I was in Fun Waan Aai Joob I had no clue what acting was,'' he says. ''Just standing in front of a camera isn't acting.''

''No, definitely not,'' Boy says. ''Showbiz wasn't my dream job. I wasn't a good looking kid with offers from many scouts. I had braces on until I graduated for crying out loud. So when the opportunity came along, I gave it a try. I took it seriously when I signed my contract with Channel 3. Well, it ended up with me falling in love with acting.''

Boy says he's been lucky to work with the cream of Thai directors, including Pisarn Akkaraseranee, Pongpat and Mom Luang Bhandevanop Devakula. But he says it was Aof who offered him his best advice. ''He always taught me that I have to read the script and do my homework but once I'm done that, I should just forget it. Because acting is not knowing what will happen next,'' he says. ''When you're on set just listen to what your costars are saying. If you've done your homework, you'll know what to say in response. It's reacting.''

Despite learning much about the industry, he still feels he's not there yet.

''When I watch other actors, I feel that I have flaws that need to be improved upon,'' he says. ''I haven't been able to totally get into character. Some roles are also too similar to me and aren't as much of a challenge, such as Juk in Waew Mayura and 'Lom' in Wayupak Montra.

''I'd like to do full-on action or a hard-edged drama. I would like those kind of opportunities to do powerful, dramatic scenes.''

His urge to take chances and learn new facets of his craft comes from his love of movies.

''I can watch every genre of film and do, especially in the cinema because there are too many distractions at home,'' he says. ''When we were on break from filming over the New Year, do you know where I was? In the cinema every day. I went alone and sometimes watched two movies a day. Sometimes when I finish work at noon, I'll go watch a movie, eat, then go back and watch another one. Often I do this alone.''

He seems immersed in the world of movies and a world away from that of dispensing headache tablets and cough syrup. Besides, if he went back to being a pharmacist, he'd probably have to shave that trademark stubble, which has become part of his image. Would doing that now ruin his self-confidence?

Boy laughs, before falling deep into thought. ''Hmm ... I'm not sure. I think I'd feel kind of empty at the beginning, but there has to be a day when I change the kind of character I play, but right now so many of my characters are the types of guys who look like this. I'd feel naked without it,'' he says, laughing.