Preferring to reside at the edges of the literary circle, Wipas Srithong for the past week has found himself under the glare of the spotlight, a discussion and a controversy.

As this year's winner of the SEA Write book award, the 42-year-old fan of sci-fi novels, pulp horror and Franz Kafka can no longer shy away from the burden or obligation that comes with the prestige.

"Yes, I'm aware that it's a full package and I have to take the whole thing," the writer says with gracious acceptance. 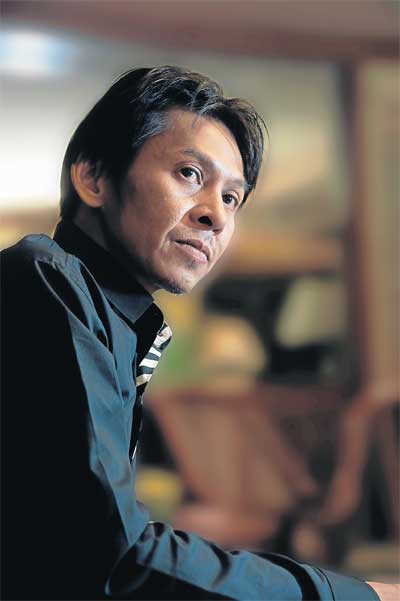 "It does get tiring to run from a TV broadcast to a press conference to an interview, but yes, it's something I will have to do."

His victory was a literary thunderclap of sorts. Four years ago, some critics made public their suspicion, and a sound one too, that a short story by Wipas bore a striking resemblance to a story by the Booker Prize-winning author Peter Carey. And when Wipas' Kon Krae (The Dwarf) was declared the SEA Write winner last Wednesday, the skeletons were dragged out of the cupboard, along with another question mark _ this time far-fetched though _ that the winning novel has a certain similarity to Stephen King's Misery.

In 2008 Wipas didn't explain himself. But in this interview, he says that he's sorry for what happened.

Wipas, a drop-out medical student, has published short stories and poetry since the early 2000s. He says that he wrote Kon Krae, which is his first novel, without thinking much about the readers or the critics.

"I don't have to please anyone, and I wrote the book mainly for myself," he pauses. "It's long, isn't it?" he adds with a half-confessional grin. "Really, I can imagine readers wanting to throw a copy against the wall."

The dark and dystopian novel, which tells the story of three friends who kidnap and lock up a dwarf in the middle of nowhere, comes from a man who is solitary by nature, albeit one with a surprisingly sociable disposition.

Wipas didn't even have a mobile phone and could only be contacted by his house number _ until recently, after this interview, when his editor handed him a primitive-looking mobile phone; he has yet to memorise its number. Wipas even set up a blog, which is inactive, but serves reporters who keep calling and asking for his picture.

Kon Krae journeys into gloomy regions as it explores the uncertainties of the human mind. Does he find that dark and pessimistic?

"Not at all. That's the beauty of it _ when people are uncertain," he says. "The unpredictability is what makes us human and that's what makes us interesting. If everyone was predictable all the time, things would be boring.

"People are typically complicated. My characters are not out of ordinary, but may be just a bit more complicated than usual. Perhaps it's also the way I depict them that makes it seem darker. In fact, I don't think humans today are any more darker than people in the past. It's still the same, but today, there's just more people discussing it, so the darkness seems to come out more."

The book explores the characters' thoughts so thoroughly that you are left with a crystal-clear image of their temperament.

Wipas explains that his style of being extremely descriptive comes from his own diary writing. During the time he was writing Kon Krae, he was also mad about D.H. Lawrence.

"I was reading three or four books of his at that time and I got that dawdling and descriptive style from him. I was really addicted to his works and wanted to try experimenting with writing like that too."

Wipas may be in his own bubble of solitude when writing, but is not oblivious to the fact that 437 pages is considered a very long book.

"I was afraid people would get bored with it. The original manuscript was even longer and had every single detail of everything, but around 200 pages had to be cut out. If I could revise it again, I would probably cut out even more."

The author explains that the book may be too slow, but it is never easy to find the balance as to how much to cut out.

''Cutting out destroys its charm. The dilly-dallying actually serves to make the story more impactful and firm,'' he says. ''It's hard to find a middle ground between where and how much to cut, so this is what I have for you now.''

Although Kon Krae has a thin plot line, the kidnapping of the dwarf that kicks the entire narrative into gear has a surreal feeling _ but not fantasy. Wipas has had encounters with dwarfs before and has even made plans to make a short film starring them. However, that never materialised, but here he is with a book about one of them instead.

''I've always had a sense of wonder for dwarfs. They are very fascinating to observe because they aren't people you can easily read and dismiss. There's something in them that is both adult and childlike. It's this perplexing characteristic that makes them such a bewilderment,'' he says, adding that the dwarves in David Lynch's movies clearly illustrate his point. In the case of Kon Krae, it was also crucial that a dwarf, rather than normal person, was captured, as the main character is a non-confronting man and needs to have someone he can easily take control of.

Much of Wipas's personal experiences were utilised in this book. The main character, Krerk, is a drop-out medical student, just like the author.

''It's my first book. It's easier to write about things close to yourself of which you have first-hand experience,'' he explains with a laugh. Most of the novel has been wrung out of his own exposure, whether it is the trip to Australia, or another character working with art.

''Many novels these days read like movie-scripts; which is why they lose their charm. It makes all the difference if an author has experienced something himself and writes about it. You can tell and it sounds kind of fake if they haven't really been there.

''A lot of media we are exposed to these days are just second-hand experience and there is no beauty in that. I barely Googled anything for my book.''

Like the main character, Wipas figured out after years of slaving away at Ramathibodi Hospital Medical School that he did not want to live his entire life as a doctor. He started writing in his university years and his early works compromise of short stories such as Maew Kao Cheewit (2002) and Wela Luang Pan Umong (2008). He has had ''broke writer's trauma'' from time to time and has had his share of struggles every now and then, but there is no doubt that writing will always be his passion.

''Getting your book published feels even better than sex.''

The road to literary stardom is still new to him but he only has plans to move forward _ while learning from his past errors. For the first time since the 2008 controversy and accusation that he might've lifted certain parts from a Peter Carey short story, Wipas finally acknowledged his mistakes.

''It was my own fault,'' he says. ''I really should have credited that writer. I'm sorry for what happened.''

In Carey's surreal story called Peeling, a man ''peels off'' layers of clothing of a woman and accidentally hits a switch that reveals that ''she'' is actually a man. Wipas's story, set in Thailand and called Pluek (''skin'' or ''shell''), has a man who unzips a woman only to find that she is a man. At the announcement of the SEA Write award, one judge, Sakul Boonyatat, defended the jury's decision, saying Kon Krae was chosen for its literary merit, and the 2008 controversy wasn't a factor. The SEA Write is not a lifetime recognition, said the judge, and this book's worth stands on its own.

''Right now, people are scouring to find other books with a kidnapping plot,'' Wipas says good-humouredly. ''That's good. From now on I will be scrutinised carefully. And no, I've never read Misery. I just found a synopsis online last night.''

That much is clear, and his first SEA Write nomination and finally the win have shown how the writer has moved from the past and can look forward to the future road of literature. In November, Wipas will publish his next novel, and he's also writing another one. As every writer knows, books live on but controversies fade away. We'll be looking forward to his next book.

Love is all over town, and beyond!