Political fallout in recent times has cut deep into the fabric of society and dented the coffers of a foundation which has been the lifeline of numerous underprivileged children. 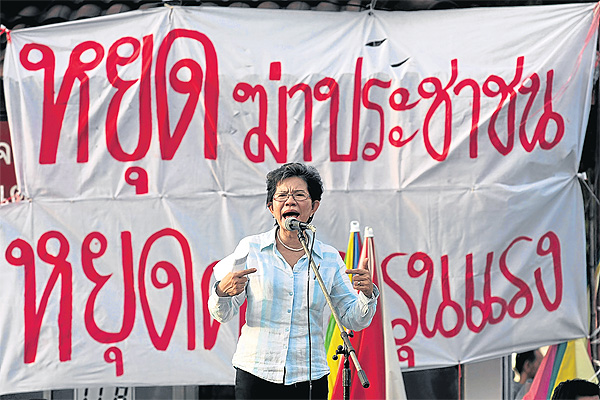 Prateep Ungsongtham-Hata takes the stage at Klong Toey intersection to attack the government in May 2010. CHANAT KATANYU

Since Prateep Ungsongtham-Hata took to the red-shirt rally stage several years ago, the Duangprateep Foundation she runs has suffered financially from dwindling domestic donations.

The foundation, it seems, is a casualty of the political divide.

Only about 10 million baht of the 30 million baht needed to run the foundation comes from public donations annually. In the past, 80% of donations came largely from private and corporate domestic donors with the remainder from overseas.

Since the political conflict broke out, however, the ratio is close to reverse. Domestic donations have since slumped to 40% against 60% from abroad.

The fall in domestic donations may be attributable to a large section of middle-class donors who have turned their backs on the foundation's founder.

Those donors who wear different coloured shirts have cut back on their willingness to write cheques for a foundation headed by a red-shirt core member.

But the foundation counts itself lucky that the growth in foreign donations has offset the lower domestic contributions. The foundation has also been buoyed in part by funding from the Global Fund for Aids.

Of the foreign funding, the Japanese are the biggest donors. 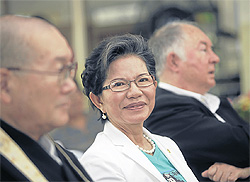 Khru Prateep is seated among foreign donors during the foundation’s celebration.

He acknowledges that her siding with the red-shirt movement has scared away many Thai "elite" donors on the opposite side of the political fence.

Sumet Jumsai, the longest-serving chair of the foundation, said local donations have ebbed in the past several years partly because donors have felt uncomfortable with the founder being focused on politics.

"We cannot afford to take sides," said Mr Sumet, who remains a director of the foundation.

David Leon, 66, a donor and a volunteer, concedes some foreign donors had withheld donations as they did not want to be seen as being involved in politics.

Mr Leon said he hoped the foundation would carry on its charity work in Bangkok and beyond.

Nittaya Promphochuenbun, the foundation's director for Aids prevention and control, said when Khru Prateep was hit with accusations and suspicion on account of her political affiliations, the foundation was also affected.

Ms Nittaya noted that this was not the first time the foundation had been affected by the founder. In the past, Khru Prateep has been accused of being anything from a drug ring leader to swindling donations.

People claimed Khru Prateep bought a Mercedes-Benz sedan from donations to the foundation. But the allegations were pure rumour, said Ms Nittaya, one of the pioneer staff still working for the foundation.

Currently, there are about 100 volunteers and permanent staff handling a number of projects including the Kanchanaburi shelter for girls who have been sexually, mentally and physically abused.

During the course of the latest political unrest in 2010, several directors resigned from the foundation. 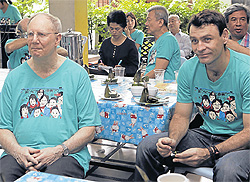 The foundation was in turmoil and a dejected Khru Prateep resigned as chairperson and went to Japan to seek emotional solace after the political violence came to an end.

Before she left, she entrusted the power to run the foundation to Dr Sant, a friend of 20 years, who has since been its chair.

The donors who pulled out following Khru Prateep's active involvement in politics included the Stock Exchange of Thailand (SET).

But the SET has resumed its contributions to the foundation after a two-year absence.

Recently, the SET made out a cheque for 2 million baht to the Chumpon and Klong Toey projects under the foundation.

The agencies which have ceased their support of the foundation for some six years include the Thai Health Promotion Fund and the Ministry of Social Development and Human Security.

Despite the decline in donations from domestic sources, the foundation has managed to continue its projects to aid underprivileged children and the needy.

Khru Prateep, a Ramon Magsaysay awardee, maintained that some individuals have steadfastly provided support to the foundation regardless of her political stand and circumstances.

The foundation has emerged from yet another low period in its 34 years.

On Aug 31, the foundation celebrated its anniversary attended by a long list of donors who showed up at Lot 6 of Klong Toey slum in Bangkok.

Several people who joined the celebration were themselves pupils of a school in the slum as well as Japanese priests, American donors and representatives of other foundations.

Both young and older students under sponsorship of the foundation took turns performing traditional dances before guests at the event.

Sombat Boonngamanong, a foundation director, said the foundation as a "quasi-NGO" and community organisation has provided ample opportunity for the grass roots to develop themselves and be a model for other communities.

Khru Prateep led the way in carrying on the foundation and the torch will need to be passed to other bearers.

"She has proved to us that a poor and lowly educated girl like herself can really make some changes," said Mr Sombat at the event.

However, he said the foundation itself has some internal restructuring to do.

The business sector cannot be the core helper of the foundation, while it cannot rely solely on public donations.

He feels the foundation could forge cooperation with businesses through their respective corporate social responsibility schemes. It is a matter of figuring out where CSR can fit into the foundation's work, Mr Sombat said. 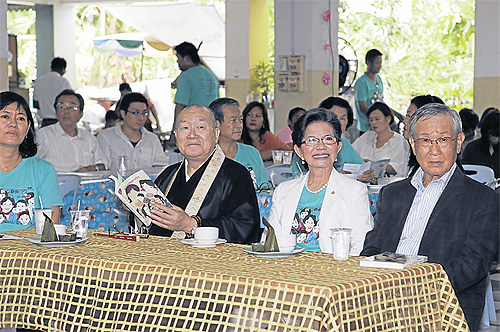 Long-time donors attend the 34th anniversary of the Duang Prateep Foundation at Lot 6 of Klong Toey slum in Bangkok. 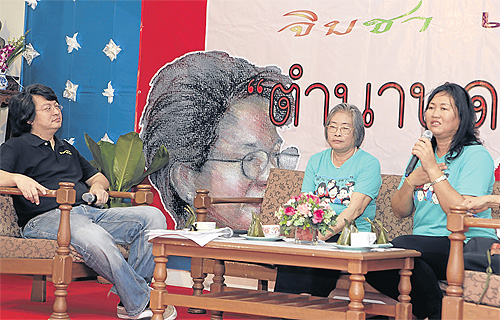 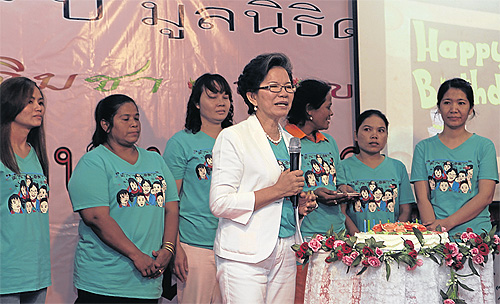 Khru Prateep speaks at the event about the foundation’s challenges and successes. PHOTOS BY KOSOL NAKACHOL 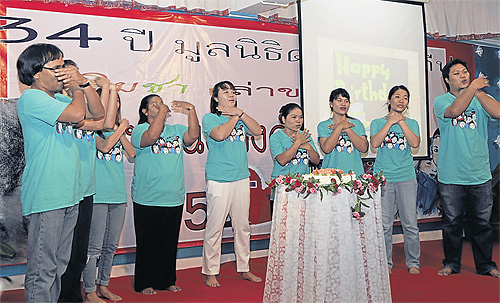 Participants at the celebration put on a performance to pay tribute to the long-standing foundation. They also honoured Khru Prateep on her 60th birthday on Aug 9.