Bangkok is known for its food and shopping and not usually its ice, but Chicago Blackhawks player Johnny Oduya came to play. The NHL hockey player hit the rinks for the 2012 Land of Smiles Ice Hockey Tournament last week.

Nearly 40 teams from around the world came to the city to be part of the annual tournament that celebrates the sport that has a growing following in the country.

It was not initially part of Oduya's plan to train in Bangkok. The NHL is currently experiencing a lockout that is postponing the season. Oduya, who is from Sweden, had been keeping up his skills during the break at rinks at home and in Chicago.

"I wanted to do something different because I am not playing," he said.

"I wanted to come back to Thailand for a while. It is a big holiday spot for Swedish people to go when it gets colder back home."

With a friend from Sweden, Oduya started to check online to see if there would even be ice available. He randomly came across the Bangkok team the Flying Farangs and decided to send an email asking for information. After correspondence back and forth Oduya decided that it might just be the perfect place to train.

"I didn't know if it would be a good idea but once we started looking into it a bit more we got more excited," he said. "I didn't know that it would end up anything like this, this is a much bigger venue than anything I thought I would be part of."

When it comes to hockey it is hard to surprise the six-foot-tall half-Kenyan professional player. He has been playing since childhood and moved to North America to join the junior hockey league in 2000 at 19 years old. By 2006 he was signed on to play with the New Jersey Devils in the NHL.

The defenceman has even played on the Swedish team for the 2010 Olympics in Vancouver.

Known for rough and tough playing, Oduya said he has seen some real promise from the expats and locals playing.

"That they can reach that skill level is really impressive. I imagine with some coaching and more ice time that they could get really good," he said.

The rinks themselves have also surprised him.

"The facilities here are unbelievable for being in a mall in a tropical paradise," he said with a chuckle at the rink at Rama IX.

He wasn't the only one surprised. Before his arrival, some of the players from different teams had heard a professional player who makes millions each season was about to show up, but they did not expect it to actually happen.

"In the beginning, the first day, I showed up to practice and it was more like 'oh you are here, we didn't really think you were going to show up'," he said. "They thought it was all talk. I hope they think it's been fun and as long as everybody has a good time I'm happy with that."

Beyond the rink, Oduya said that having ice time in Bangkok has given him a great experience in the city.

"I have been here twice before so it's not the first time but it still feels like the first time because the city is so big," he explained. "It's good to because you have the guys on the team who can show you around, the great places to eat and so forth. It's a neat way of coming to the city."

With fellow players as guides he planned to explore during his 10-day stay. He went to see the beaches of Hua Hin and took in the sights of Bangkok but was also keen to join in with something else.

"Some of the guys on the team have a band, I'm really excited to see them play," he said, hinting at a singalong.

Oduya said beyond the music, holiday, and practice he hoped a few things would come from his trip and the packed fans in the stands. "Maybe now some kids who've seen us play will want to look into the sport and maybe even start a youth programme," he said.

He would also like to work on giving interested kids an opportunity to train abroad. Thailand may also have gained something from the opportunity.

"If I have another 10 years in the NHL hopefully after I can come and join them playing here and doing the tournaments here," he said.

For the fans and players who attended the tournament it is nice to know that even far from the usual NHL rinks the calibre of play can lure in top players. 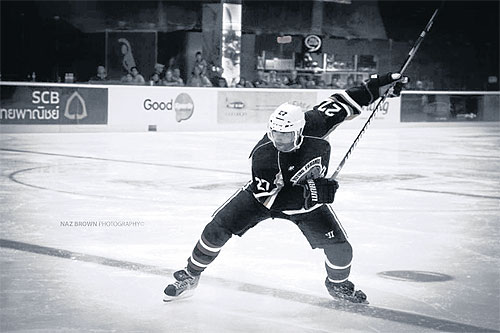