The delectable cactus fruit came to Thailand by way of Vietnam and was soon a big hit with Thai growers; next stop was the Philippines, where it has also made a splash and is being promoted by a provincial governor

The first dragonfruit I ever tasted came from Vietnam, brought by a Thai friend who had an import-export business there. I thought it was strange that I was eating the fruit of a cactus; until then the only cactus I knew of with an edible fruit was the prickly pear in the genus Opuntia, which I've never tasted. The dragonfruit _ Hylocereus undatus, and christened kaew mangkorn in Thai _ was much bigger, and I marvelled at its bright pinkish-red skin with green-tipped scales, and white flesh dotted by tiny edible sesame-like seeds. Eating it chilled, I couldn't quite pinpoint what it tasted like; it had a flavour all its own, which was refreshing. It was in the mid-1990s, and I remember saving some of the seeds, which readily germinated. 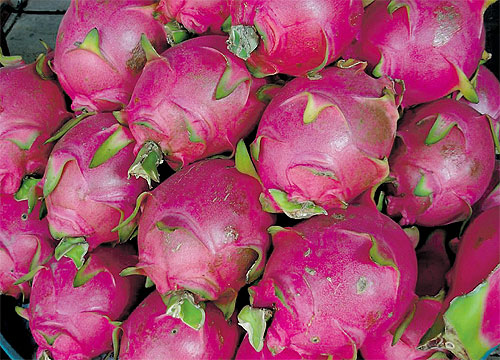 NUTRITIOUS DELIGHT: Dragonfruit is loaded with vitamins and minerals.

Before my seedlings could grow, however, the fruit was selling in the local market. Thai growers are a diligent lot and never pass up an opportunity to try their hand at planting a new cash crop. When it first appeared, the dragonfruit was among the most expensive locally grown fruits at 80 baht a kilo. As more farmers planted it, it ceased to be a novelty and the price dropped accordingly. Now it is selling for about 25-40 baht a kilo in Bangkok, and even a newer, sweeter variety with red flesh failed to fetch the price the older variety enjoyed when it first appeared in the market.

The dragonfruit has made its way to the Philippines, where it immediately caught the fancy of people in various sectors. Filipino food technologists and researchers have made a number of products from the fruit, including ice-cream, jam, jelly, juice and puree as well as wine, and I won't be surprised if soon they will be marketing it in dehydrated form. Soap has been made from its stem.

One province, Ilocos Norte in northern Luzon, is now reportedly vying to be the country's dragonfruit capital, and the governor, Imee Marcos, is spearheading the effort. Realising the fruit's potential in boosting ecotourism and improving the people's livelihood, she has created a team to work out the expansion of areas planted with dragonfruit in most of the province's 20 towns and two cities.

According to a report by Rudy Fernandez in the Philippine Star daily newspaper, demonstration plots have been set up in farmers' fields, elementary schools and villages, and training programmes, field consultancies, school-on-the-air programmes, product development and marketing have been conducted in Ilocos Norte, birthplace of the late dictator, president Ferdinand Marcos, and now the home turf of his daughter and political heiress, Imee. Giving her a helping hand are academic and research institutions, local government units and the private sector.

Mildly sweet and best served cold, the dragonfruit is usually eaten fresh as well as used in fruit salads. Researchers found it to be low in calories and high in fibre, with seeds containing polyunsaturated fatty acids _ thus it lowers cholesterol and high blood pressure, and prevents constipation. The fruit has also been found to be rich in minerals, especially calcium and phosphorus, and vitamins B and C, as well as antioxidants, which help prevent the formation of carcinogenic free-radicals in the body.

Although the seeds germinate easily, the dragonfruit is best propagated from cuttings. If you have been given cuttings, leave them in a dry cool place until the wounds have healed. Thai growers plant the cuttings individually in black plastic bags containing coarse sand mixed with coconut coir, which is kept moist but not soggy. After the roots have formed, in about six to eight weeks, the plants are ready to be transplanted.

Like all cacti, the dragonfruit needs full sun and does not like soggy soil, so plant it in sandy loam, which offers good drainage. Commercial growers raise the soil into a mound for better drainage, especially in the rainy season. As this cactus is a vine, it needs support on which to climb. Home gardeners may use fence posts. Plantations I have visited use two-metre-high hollow concrete posts; with a string, four plantlets are tied around posts spaced three metres apart. As the plants grow, roots sprout on the stems and anchor them to the post. Attached to the top of the pole is a small horizontal trellis made of hardwood; after the vines have reached the top of the pole, they gather on the trellis, from where their fruit-bearing stems hang.

Dragonfruit vines propagated from cuttings usually begin flowering when they are about two years old. The flowers, which are fragrant, open at dusk and close before dawn, so it is safe to assume that they are pollinated by bats and night insects like moths. There are those who believe that the flowers are self-pollinated, but the reason they have fragrance is to attract pollinators. Fruits are ready to harvest six to seven weeks after flowering.

Given enough fertiliser (NPK 15-15-15) diluted in water and applied every two weeks, and grown in suitable conditions (well-drained soil and full sun), two-year-old vines can yield up to 50 fruits (ranging in size from 200 to 500 grammes, or three to two fruits per kilo) per post per year, and up to 100 as they grow older. The plants have few insect pests, but watch out for red ants, which bite on the young stems, and they are susceptible to soil-borne fungi, which can be prevented by good drainage.