The tie that binds

Jetsadaporn 'Tik' Pholdee has played gangsters, murderers and even a prince but in an extraordinary career this actor found his greatest challenge in the most ordinary of roles _ an overwrought office worker who finds out there's life beyond iPhones

For his latest dramatic comedy, Jetsadaporn "Tik" Pholdee had to study a group of people whose culture, patterns of behaviour and manner of dress were completely alien to him: office workers. 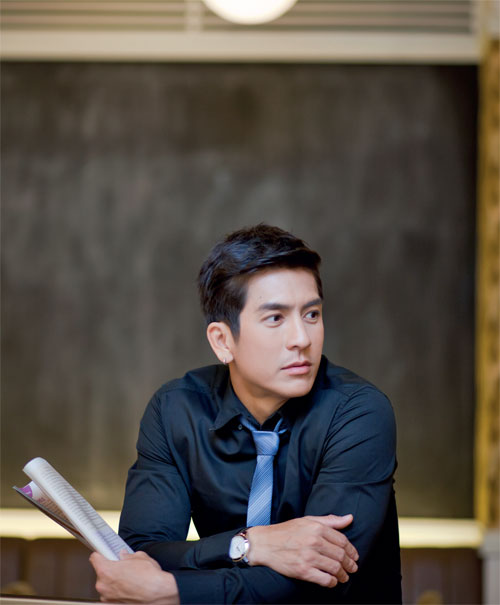 "I find office people are incredible," he says. "Their lives might seem boring, but when you take a closer look, they're filled with drama."

It was not an easy transition.

"I'm nothing like Pun. I had to do a lot of research _ how office people talk, dress and what they carry to work," he said. "I felt awkward at first because it's so not me. That's why I found it so challenging. Pun is also very proper, well groomed and highly organised. I call him 'Mr Perfect'."

Tik, on the other hand, is most definitely not a suit and tie kind of guy _ he is more likely to be found bouncing around from adventure to adventure as the host of his own travel programme.

However, Tik did succeed in making the transformation from laid-back adventurer to playing a robotic office man guided by his smartphone.

Pun demands that everything go according to schedule _ his work appointments, holidays, even outings with his girlfriend. He plans for everything meticulously but neglects to prepare for one eventuality _ failure.

"For a guy who equates financial success to happiness like him, failure is devastating. The movie shows how he learns to cope when things do not go according to plan," he says. "That's the way life is _ we can't control everything in our lives."

Tik says everyone has their own way of coping with setbacks. "For me, when I'm disappointed, I get emotional and reclusive," he says. "But I must remind myself I'm just human and all I have to do is to put it all behind me and move on."

Tik broke onto the scene 15 years ago, playing a gangster in Nonzee Nimibutr's blockbuster 2499 Antapan Krong Muang and has since played roles running the gamut from prince to psychopath. But he says that playing an ordinary man, who "could be a random guy you meet on the BTS", has been his greatest challenge to date _ and his most rewarding.

"It was not easy. I had to be natural and make him believable as an ordinary guy, but he's also a unique individual," Tik says.

To assist him in tackling the role, Tik looked beneath the veneer of office life. "Office people work under a lot of pressure, from nine to five for five days a week at least. That's the boring part. But the dramatic part is that there are so many different types of people in every office."

Put these characters together in one workplace and you have the makings of great drama, he says.

"Maybe the staff members hate their boss because he's always taking advantage of their hard work. Or there's a secretary who's forced to wait on her demanding superior, doing everything from picking up the dry-cleaning to babysitting. Colleagues gossip behind one another's backs but pretend to be best buddies. A maid might 'borrow' an office appliance or photocopy her children's homework on the office Xerox machine. Someone might be putting more effort into a sideline business selling cosmetics than their actual work. 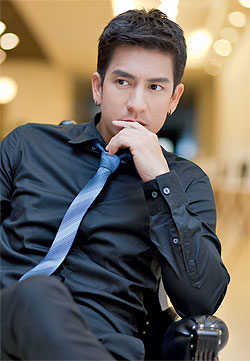 ''It leaves me wondering how many office workers out there are really devoted to their workplace, like working their asses off and doing things like making sure the lights are out?''

Tik enjoyed exploring these types of dramas behind everyday office life. ''Don't you think it would be a great basis for a reality TV show?''

He suspects that the characters in Yod Manut Ngern Duen will be familiar to office workers in the audience. ''I'm sure some might be like, 'Oh, I know that dude!' or 'We have that same pest in my office!'''

As for Tik, while he enjoyed his foray into the office world, he lives a life far removed from cubicles and casual Fridays. If he's not on location shooting a film, he'll likely be out of town scouting for places to shoot The Navigator, a travel and adventure programme that airs only on public holidays on Channel 3.

Tik says that filming The Navigator requires the kind of leadership and decision-making abilities that Pun displays in Yod Manut Ngern Duen; there is an element of the unplanned that is integral to the show's success.

''Pun is organised and strict, while The Navigator requires taking unplanned trips into the wild, which I like. I love surprises. They make life interesting.''

Despite being one of Thailand's top box office draws, Tik has increasingly chosen to spend time on his show.

''When my brother [Pichetchai Pholdee] and I decided to do the show, I realised it'd take up a lot of my time and that's fine with me,'' he says. ''Don't get me wrong. I'm still passionate about acting and thankful for the appreciation I get, however, at this point in my life, I'm blessed to do what I love the most _ travelling, adventuring, backpacking and trekking. I'm thrilled to discover new places.''

Destinations are well scouted prior to filming on The Navigator, but what makes the show magical for Tik are the unexpected experiences along the way. In one of the series' most memorable episodes, for example, he tracked a rare, long-tailed goral at Doi Luang in Chiang Mai. After several trips, he finally found it perched serenely at the top of a ragged cliff. ''I shot that scene myself. I was so excited that my hands were shaking. I remember everything accurately. What a day.''

The show has been an education for him, he says. ''To witness nature's beauty and strength up close has helped build my character. I think I've become more tenacious and humble. We cannot force nature to bend to our needs,'' he says. ''I have more strength in dealing with problems, inconveniences, obstacles and natural disasters. I can deal with disappointment and accept what may come with it. It's a part of life.''

There have also been heartwarming moments he'll never forget. In one episode, Tik visited the Bangkok School for the Blind and asked a student there to act as his tour guide. ''This young boy took me to his hometown in Chumphon and showed me around,'' he says. ''It was amazing to get a totally different appreciation of the beauty of nature through his perspective. I'm in awe of how beautiful his world is.''

He sounds like one heck of a nice fellow and despite having earlier played gangsters and murderers Tik's image now is firmly in the good guy camp. Is it tough to live up to those expectations?

Tik laughs. ''I never say I'm a good guy. I'm a guy who tries his best to be good. I also try not to cause other people trouble,'' he says, something he wishes wider society would also do. ''Thai people currently don't care enough about each other. Most of the time we just point fingers at one another. The wounds inflicted over the past couple of years have become scars _ just like in nature they take a long time to heal.''

People, like his character Pun, are ''wasting time'' he says.

''We spend a lot of time on smartphones and social networks rather than paying attention to the people right in front of us,'' he says. ''I own a smartphone but I'm not addicted to it. I'm not that type of person who cares about people clicking 'like' on a Facebook post of mine. I'm not judging anyone here. It's a personal choice.''

As for his choice, it's obvious _ he didn't even bring his phone to the interview.

''But for me, what happens right in front of me now matters most. And I hope I've let you know that.''

I'm close to my brothers. Working with one of them [Pichetchai Pholdee] has been a blessing. He puts a lot of effort into our show. My dad has always taught me to look after my little brothers and set a good example _ just like how my dad has always been my role model.

My show is wild, adventurous and nature-oriented, seeking out unseen nature. What I try to communicate is that to appreciate the beauty of something amazing you first need to give it your all to get there. When we reach our destination, all the troubles, difficulties and sweat are gone. One time we had to travel through a wild, dense forest before eventually reaching an amazing waterfall. It was like heaven.

On the other hand, there's severe deforestation. Why are there floods? Fewer forests. Simple as that.

Local people I meet while shooting in the countryside are happy to see me. That's very nice. I am a bit shy but I welcome their friendship. They welcome me and I'm just glad. They are very helpful and friendly.

OTHER WORK ASIDE FROM THE MOVIE AND HIS SHOW

I agreed to play the main character in a Thai adaptation of Autumn in My Heart [a hit Korean drama series] because the role is to dream for. I just watched it when they contacted me to star in the show.

I'll never get used to fame no matter how many years pass. When I think of myself, I still think of myself as Tik, an ordinary man. As for social networking and technology, we cannot fight that. We cannot tell people not to pry. it's beyond our control but we can control ourselves. What we can do is to try to live with it. I consider myself a working man, an actor. I do my best on every project.

I'm a computer Luddite. Knowing how to turn my computer on and off is good enough. But if I were into social networking, I wouldn't check it out constantly because I really don't have the time.

I believe everyone is entitled to privacy. I don't lead a dramatic life. My life is simple. I go to work [on the set or wherever] and after I go home to spend time with my family. If I have a break, I travel to other provinces.

KEYS TO LONGEVITY IN SHOWBIZ

I have no idea. It depends on who's still willing to hire me. I don't think I can choose. I actually don't do many films. Is that my marketing plan in disguise? I don't know. [Laughs]. The rarer something is, the more it's in demand, right?

IF THE MOVIE TANKS

It's probably out of my hands, given that I did my best in acting and promoting the film. There's nothing else I could possibly do. I completed my job and the rest is up to the audience and whether they appreciate the script.

WHETHER HE MIGHT EVER END UP IN THE OFFICE

I have a degree in industrial engineering, so I think I can see myself working in a factory in another province. I might have a desk, but I wouldn't sit, so it wouldn't be boring. When I first graduated, I wanted to be an engineer just like my classmates. Then again, like in this movie, my friends say I already have a good job. I can't say the same for them. 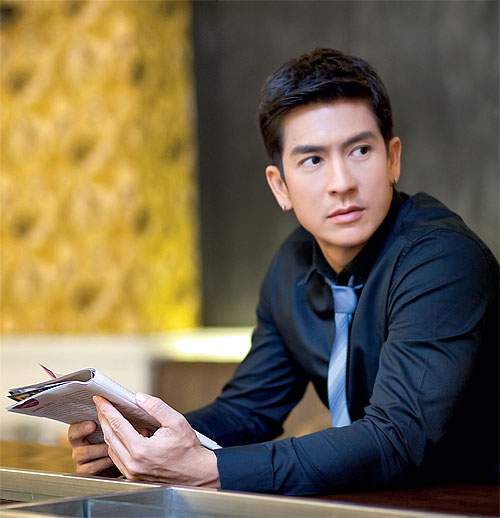