The Bangkok Chefs Charity team visits the remote Omkoi district in Chiang Mai to see how their efforts have affected schoolchildren, and to serve up lunch

A team from the Bangkok Chefs Charity (BCC), led by sisters Nuntiya and Patcharin Hem-ung-gull of Gourmet One Food Service (Thailand), last week travelled into the ruggedly mountainous Omkoi district in Chiang Mai. 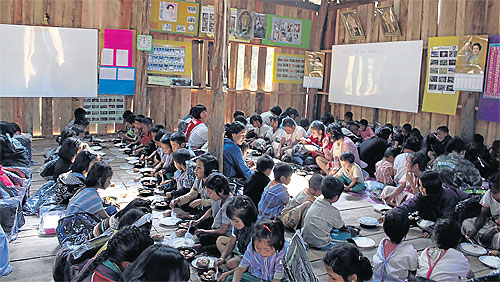 There they saw the four buildings, solar systems, DTVs and 1,370 sets of backpacks and stationery their charity work had provided to four Mae Fah Luang Highland Community Learning Centers at Ban Tee Noeh, Sala The, Mae Kerb and Kong Da in tambon Nakien.

Omkoi, a district in Chiang Mai's southwest, is heavily forested. About 85% of the population are Karen people who also face a number of economic problems. Because of the difficult terrain, agricultural land is scarce; farming practices are primitive, relying largely on traditional slash and burn techniques.

"Omkoi is Chiang Mai's most difficult district to reach as the roads are in bad condition and are completely inaccessible in the rainy season," said Charoen Thammabundit, director of Omkoi Non-formal Education Center.

"The education up here is in the form of Mae Fah Luang Highland Community Learning Center. There are 112 learning centres with 4,750 hilltribe students under the care of Omkoi Non-formal Education Center," said Suwan Phutphan, or "Kru Tom", a teacher who has to ride his old motorcycle up and down the hill each day to reach his young students. "We are fortunate to receive patronage from HRH Princess Maha Chakri Sirindhorn who has graciously sent teachers to help at our learning centres."

According to Patcharin, the four school buildings were built using part of the funds raised during the 2012 Bangkok Chefs Charity Gala Dinner, held in the Princess' presence at the Mandarin Oriental, Bangkok in August. 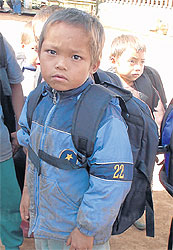 A Karen kid with his new backpack.

"We sent a team to survey the area and work with Omkoi Non-formal Education Center," said Patcharin. "We visited the schools with Kru Tom and found out that the four learning centres at Ban Tee Noeh, Sala The, Mae Kerb and Kong Da villages are badly in need of new buildings.

"It took us some time to arrange for the construction materials to be transported up here as we had to wait until the roads were accessible by small trucks. It took several trips and days as the road is very difficult to manoeuvre. The Karen villagers then helped build the schools as no construction firms wanted to come so far up here. We are also very lucky and grateful to have Chiang Mai MP Srires Kotkamlue assist us on this trip," said Patcharin.

Apart from the official handover of the four buildings and the distribution of backpacks and stationery, the BCC team also prepared lunch for hilltribe schoolchildren at Ban Tee Noeh and Sala The. The delicious menu was khai palo (Chinese-style boiled eggs in palo gravy with pork and tofu), served with steamed rice, and with a piece of fruit cake as dessert.

"As chefs, we wanted to do something we are good at for the children and decided to cook a lunch meal for them," said Kostner. "We have come up with khai palo, a simple yet favourite dish for kids. The food is pre-cooked at Dhara Dhevi and transported up here early in the morning. We then re-heat the food at the school's kitchen.

"Each kid gets two eggs, four pieces of pork and three pieces of tofu, plus a fruit cake," added Kostner. "But as you can see, the kids only eat a few spoonfuls and take the rest home to share with their families. I was so touched with their love and care for their parents."

Eberharter said: "This trip was an eye-opener for me and my colleagues. We learned that there are still a lot of poor children in Thailand who need help, especially in education. I am so happy to see the kids' smiles when they eat the food. It's a happy meal for them and we are so glad that we can make it happen."

The inaugural Bangkok Chefs Charity was held in 2009 in the gracious presence of Princess Maha Chakri Sirindhorn, with all proceeds going towards her Sai Jai Thai Foundation and needy children and schools in northern Thailand. The 2010 and 2011 charity galas benefitted the Border Patrol Police Schools Foundation under her patronage, as well as helping flood victims near Bangkok.

In addition, the Bangkok Chefs Charity donated 1 million baht as a long-term scholarship fund to support the education of less fortunate students in all regions of Thailand through the Bangkok Post Foundation. The 30-year-old foundation is now supporting hundreds of students from primary to university level. The funds supporting them come from donations and the interest they earn. 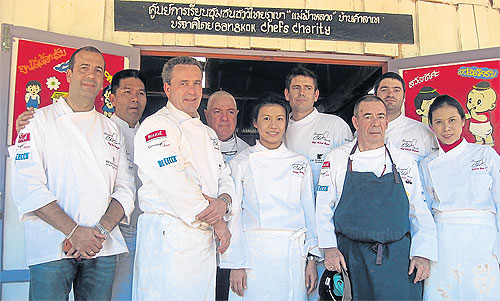 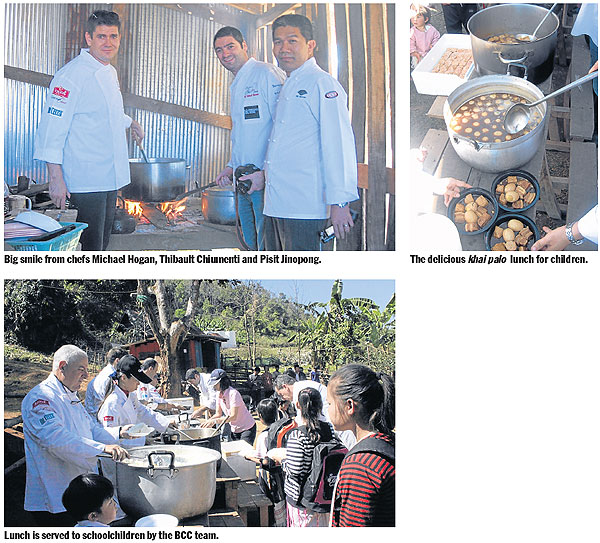