A dish sure to lead you to temptation
Life
Social & Lifestyle

A dish sure to lead you to temptation

'Khao kha moo' may not be a favourite among nutritionists, but its popularity nationwide proves that many people are happy to indulge

A concern for healthy nutrition and a fondness for khao ka moo (Chinese stewed pork leg with rice) are tendencies so strongly opposed to each other that there is no hope of reconciling them. The best way around it, if you run into some irresistible khao ka moo at mealtime, is to vow that if you eat some now, you won't go near it again for a month. 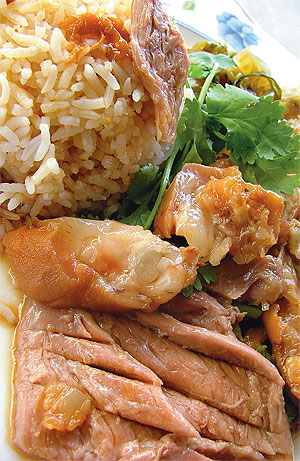 NAUGHTY, BUT NICE: ‘Khao ka moo’ may be delicious, but it’s not a nutritious option.

Another way to put yourself at ease might be to eat raw garlic and bird's eye chillies together with the pork, if you subscribe to the belief that these vegetables can stop cholesterol from clogging your arteries.

Even though khao kha moo has a reputation for being extremely fatty, it is a one-dish meal that is highly popular at shopping mall food courts and at street stalls.

Preparing it for sale is an inviting challenge to cooks. If they can make a tasty version that appeals to customers, they can count on a bright commercial future. Examples of successful places that sell it can be found all over the country. Some started as modest stalls that grew over time into famous restaurants whose customers are willing to travel long distances through bad traffic to enjoy a plateful.

Basically, khao ka moo is pork that has been simmered in a seasoned sauce until it becomes so tender that the meat falls easily from the bone. There are many different ways of making it, but one requirement that is common to them all is the need to grill the leg before stewing it. The original purpose of this procedure was to let the fire burn away the remaining bristles, but it is still done now even though these days the pork legs used have had all of the bristles removed in advance. This is because the heat causes the pork skin to shrink and enclose the meat more tightly. The leg stays over the fire until it begins to brown, then it is rinsed, the burned material is scraped from the skin, and it is ready to stew.

The flavourings that will be simmered with the meat include basic standards such as the Chinese aromatic seasoning powder called pha lo, plus garlic, pepper, palm sugar and black soya sauce. But each cook usually has a technique for personalising the dish by adding other seasonings. A recipe used by one provincial cook, for example, involves simmering the pork leg until it becomes very tender and then adding the juice of three or four tender coconuts to add sweetness and an appetising aroma.

Experts at cooking khao ka moo ensure that the flavour of the dish combines sweetness and saltiness in a proper balance. Their recipes and techniques for achieving this harmony of tastes are basically similar.

The seasonings used to cook four pork legs with the accent on sweetness will include four cups of peeled garlic cloves, four tablespoons of whole dried peppercorns, 1kg of palm sugar and a bottle each of black soya sauce and vegetable oil. The pork legs, after they have been grilled and the burned skin scraped off, will be cut into two parts. The bone is removed from the fatty upper portion but will not be thrown away if the plan is to make soup to eat with the khao ka moo. Then the bones will be boiled to make broth.

The lower portion of the leg, mostly skin and tendons, is called the kaki. It is fried with a finely ground mixture of garlic, pepper and coriander root. When it begins giving off an appetising aroma it is taken from the fire and stewed together with the upper portions of the pork legs and their seasonings.

To make a version of the dish that is saltier and less sweet, the four pork legs are seasoned with a large bunch of fresh coriander, four tablespoons of whole dried peppercorns and Chinese spices that include five pieces of star anise, cinnamon and chuan jiao (Szechuan peppercorns). All of these flavourings are put into a small white cloth bag to keep them from mixing with the sauce. Other ingredients include a half-cup of the Thai liquor called lao khao, about a cup of palm sugar, three pieces of galangal, a bunch of pandanus leaves and a bottle each of white and black soya sauce.

The cooking technique is the same as that used to make the sweet version _ after grilling, the pork legs are cut into two parts with the lower portions fried with the same seasonings and then stewed with the upper portions.

The vegetable eaten with the pork legs is generally sour pickled cabbage that has been dried, cut into pieces and fried with garlic, then simmered in pork stock until soft. Some cooks prefer to use pak kana (Chinese broccoli) that has been blanched in the pork leg broth.

Many people are especially fond of the kaki, or trotter, because it does not have much fat but does have plenty of tendons and thick skin, which are very flavourful after stewing and, they feel, more fun to eat than the heavier upper leg. They usually order a whole leg.

Any leftover pork can be made into a number of other dishes. For one, the meat can be cut into pieces and put back in the broth, which is mixed with water and heated until it comes to a boil. Some cooks also add gelatine and then set it out to cool and put it in the refrigerator overnight. It will set into a jelly called ka moo yen, which is especially popular in the North, where it is called kaeng kradang.

Even though the leg is a part of the pig that lends itself especially well to stewing and making khao ka moo, it is also delicious when prepared in other ways. It can be boiled in water and made into a delicious tom yam, for example, or cooked as a spicy stir-fry like the one usually made with the meat of wild boar.

Even though, in khao ka moo form, the pork leg can seduce many otherwise rational people into nutritional sin, they will feel that it is so delicious that it is well worth the risk every once in a while. At other times there is a whole repertoire of other dishes made from the same cut of pork that can be enjoyed with far less guilt.