That round mass of butter and eggs they call a mamon looks painfully plain, but a bite into it insists otherwise. A mamon is a sweet, light and fluffy butter cake which stands out for its simplicity: it does not require any frosting or toppings to be enjoyed. 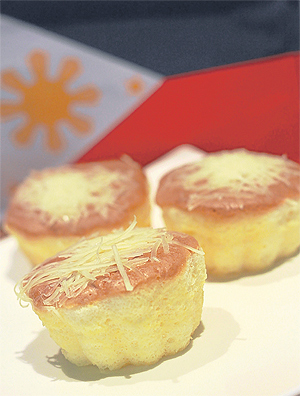 Its name establishes it as a distinctive pastry of its own, the way doughnuts and croissants make you think of a specific taste and shape; very fair to demand a name of its own, indeed, in our cake-clad world filled with alluring pastries. Its light texture makes it a treat that is never too heavy to devour.

The availability of mamon can be overwhelming, with innumerable brands jumping at us from every direction, whether in supermarkets, cafes, malls or tourist stops in the country. Some established shops offering them in malls and supermarkets include Miss Mamon and King Mamon.

With so many different Thai bakeries offering this delectable treat, cake-nibblers may think it is a wondrous Thai creation, when in truth, it is not. The obscure history and lesser-known fact of the mamon is that it first originated in the Philippines. 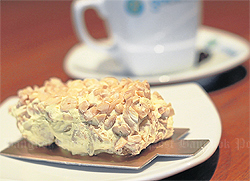 The Sans Rival offers a nutty and buttery blend of meringue, cashew and butter cream.

Mamon first came to life during World War II. Food was rationed and some of the few commodities people could get were flour and liquid butter. Back then, civilians would combine the two ingredients to create a barely edible and hardly tasty yellow, cake-ish mass. It was merely food for survival, but it is from these roots the mamon recipe has been improved and refined to become what it is today. In fact, mamon could very well be the face of Filipino cuisine, as this sponge cake has become a versatile treat that can be snacked on at any time of the day, mainly because of its affordable price.

Hans Ching, a 21-year-old student in the Philippines explains how it is a part of the Pinoy way of life: "It is an integral part of our culture, with mamon usually being brought home as a gift for the family, or for parties, or for others.

"We Filipinos love cakes and never miss opportunities to celebrate special occasions with a cake."

"It's a comfort food because it suits any occasion to me and it seems to appear anywhere, so having it around makes me feel like I am home. It's something you don't get tired of because it has become part of what the Filipino palate is _ sweet and simple."

A name synonymous with this cake is Filipino bakery Goldilocks, which has contributed to popularising the treat throughout the country and, eventually, the world. It started out as a small bakery shop run by two sisters and their sister-in-law in 1966, and today it is a global franchise with outlets all across the US, Canada and countries in Asia such as Hong Kong, Singapore and Thailand. 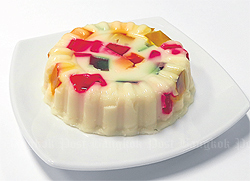 Although Goldilocks was the first to popularise the mamon, it has been last to enter the scene in Thailand. Customers may be surprised at how moist the mamon at Goldilocks are as opposed to the drier versions we may be accustomed to, but Atipol Terahsongkran, managing director of Goldilocks Thailand, explains: "This is how the original is supposed to taste _ rich in butter, which consequently leaves it quite damp. Filipino people have a very sweet palate and they also love fried things, so this translates into their pastries, which are rich in taste and heavier than what Thai people usually prefer."

The mamon are in airtight packaging at Goldilocks and this is what keeps them so fresh, hygienic and moist, just as they should be. The original Fluffy Mamon (30 baht) at Goldilocks is large, with a diameter of 10cm. Although this portion is the standard for Pinoys (and one may not even be enough!), it is much too big for a typical Thai, who could probably make two servings out of it. This has led to a smaller portion only available in Thailand, which is available at 7-Eleven stores for 15 baht.

Nevertheless, all the other desserts at Goldilocks follow the same original recipes, so if you want a taste of something different, pop by to try their sweet treats.

For a cold gelatin-clad dessert, pick Cathedral Window (40 baht). With jelly cubes of apple, strawberry and orange flavours within a milky gelatin, it's a new taste compared to the fruit and jelly treats we are usually accustomed to.

If you are willing to try something a little more exotic and in no way guilt-free, try the Sans Rival (55 baht), a nutty and buttery blend of meringue, cashew and butter cream, best served chilled.