Dwelling on the past
Life
Social & Lifestyle

Dwelling on the past

With a lively voice, Dr Joyce White described the details and lessons she had learned from archaeological excavations in Ban Chiang in Thailand's Northeast and northern Laos. 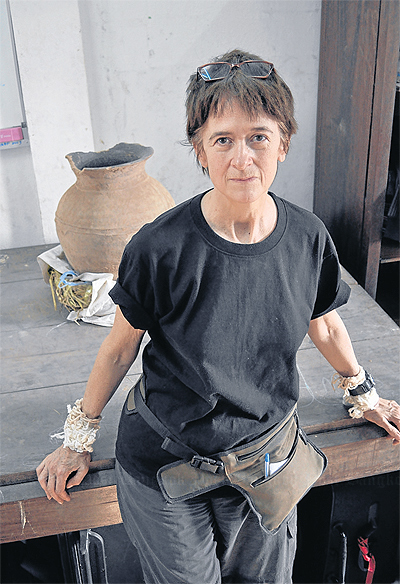 US archaeologist Joyce White has been working at excavation sites in Ban Chiang, Udon Thani, and northern Laos.

A slim, kind-looking woman, Dr White is an associate curator of the Asian Section of the University of Pennsylvania Museum of Archaeology and Anthropology (Penn Museum) and director of the Ban Chiang Project. She was in Bangkok recently to deliver a lecture entitled "What do we want from the past? Lessons from the archaeological management of Laos and Thailand" at Thammasat University's College of Innovation.

Dr White is also the director of the Middle Mekong Archaeology Project and adjunct associate professor of the University of Pennsylvania's Department of Anthropology.

"My career has focused on multi-disciplinary investigation of the human past in Thailand and Laos, especially in the middle Mekong basin," Dr White said. "I am particularly interested in the Middle Holocene, the period roughly between 6000-2000BC when agriculture and metallurgy first appeared in Southeast Asia."

When she was a Penn anthropology graduate student, she worked under professor Chester Gorman on artefacts from Ban Chiang and other prehistoric sites in Thailand during 1974-1981 as a researcher, lab director, volunteer, work-study student supervisor and more.

Ban Chiang is a village/mortuary site in the northeastern province of Udon Thani. It was first excavated by Dr Gorman of Penn Museum and Pisit Charoenwongsa of the Fine Arts Department during 1974-1975. Its importance lies in the fact that this small village was among the first to establish the existence of an unknown prehistoric culture and a separate bronze age in Southeast Asia.

Dr White was born in 1952 in Chicago, but grew up in Rhode Island. She was the middle child with an older and a younger brother.

She obtained her undergraduate degree at Oberlin College in Ohio in 1974, and her master's and PhD in anthropology at the University of Pennsylvania in 1976 and 1986, respectively.

"Regarding my early passion for archaeology, there were a few inklings around the age of six. I remember seeing a book about people living in caves and I was so intrigued that when a class project required us to create a scene in a shoebox, I did one of people living in a cave," she said.

Later, in the fourth grade, she did a presentation on the Egyptian pyramids. The idea came from the World Book Encyclopedia on the family bookshelf. She would browse the volumes and was captivated by the diagrams and stories about ways of life that were so different from hers.

"I've always wanted to be an archaeologist _ since I was 12. I have always loved the past and thinking about how we came to be," she said. "It was at that age that I learned the word for the people who studied these ancient civilisations and societies _ archaeologist." She thought she might specialise in European archaeology when, at the age of 15, her parents took the family to Europe and she saw excavations in the grounds of medieval churches. "But seeing presentations on Chet Gorman's work in Thailand changed all that and I never looked back," Dr White said.

Her interest in Southeast Asian archaeology began in graduate school when she met Dr Gorman and saw slide presentations of his work in Thailand. His research on early agriculture and early metallurgy fascinated her.

After Dr Gorman's death in 1981, she became an exhibition curator for the Smithsonian Traveling Exhibition Service and Ban Chiang Project Director. After completing her dissertation in 1986, which revised Dr Gorman's chronology for Ban Chiang, she focused on the Ban Chiang burial sequence.

"My research endeavours included an analysis and publication of Penn excavations at Ban Chiang in the mid-1970s and ecological field research at Ban Chiang in 1978-81 where I investigated how local people identified and used plants," she said.

Other work included lake coring and ecological mapping for palaeoenvironmental research in Thailand during the 1990s. Since 2001, she has surveyed and excavated northern Laos, especially in Luang Prabang province.

She plans to publish this work in a series of monographs in order to preserve for posterity Penn Museum's pioneering research in Southeast Asia.

Since 2005, Dr White and her team have identified 85 sites in Southeast Asia and uncovered abundant evidence such as core tools, flakes and earthenware. For example, beneath Tiger Cave in Laos they found several human burials. Inside a pot were skulls and other bones from at least three people. "When we removed the white lid made of a very soft limestone, we found a jar with coned patterns," she said.

Tests at Tham An, a cave site in Laos, resulted in an important site with mainly iron-age and stone-age deposits. "But when we returned months later, nothing was left. Nothing but dirt. More than 100m3 of earth had been removed. Chinese firms came to buy soil [for land filling] for their houses," Dr White said.

In 2011, Dr White and her team undertook surveys in Ban Chiang and Laos and found 10 archaeological sites in Laos. On her next trip there, they found 54 other sites on the Mekong River Basin satellite streams.

According to Dr White, the surveys provided some crucial lessons: devastation caused by development can be faster than looting; test excavations can promote abuse; and important sites need to be protected as soon as they have been identified.

She also realised that authorities need to reclassify most metal-age sites as residential sites, such as Ban Chiang in Udon Thani, Ban Kao in Kanchanaburi and Khok Phanom Dee in Chachoengsao. At present, mortuary sites in Thailand are usually identified as cemeteries, such as Ban Kao and Ban None Wat in Nakhon Ratchasima. Like Ban Kao and Khok Phanom Dee, Ban Chiang is a mixed mortuary and occupation site.

"Thailand is much more proactive now compared to the earlier days, especially Ban Chiang Museum. On the other hand, looting has been going on. There has been aggressive looting and reconstruction and repainting," the archaeologist said. 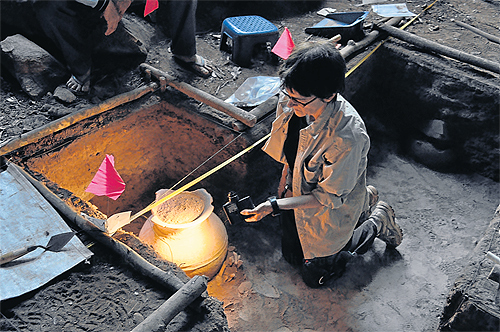