Even before its release on Monday, the documentary Paradoxocracy has caused a stir for tackling the tricky history and contested truths of Thai democracy

This coming Monday, June 24, marks the 81st anniversary of the birth of democracy in Thailand. It's been a rough road we've taken since the 1932 Revolution, followed by subsequent coups and counter-coups, the decades of dictatorship, the student uprisings, the money politics and the complication of visible and invisible forces, right up to our deep divides of now. All of these are presented in an ambitious documentary film to be released on Monday. Prachathipathai, or Paradoxocracy, chronicles and comments on the eight-decade journey of Thai-style democracy whose past is sometimes forgotten and whose future is always uncertain.

Thinkers and scholars featured in Paradoxocracy:

Directed by movie veteran Pen-ek Ratanaruang and documentary filmmaker and former A Day magazine founder Pasakorn Pramoolwong, the film has a rare Monday opening _ to emphasise its message, when films usually open here on Thursday _ while its subject matter is even rarer in a movie industry where ghosts and romantic comedy stories abound.

Amidst our ongoing political schism, the film is more than enough to create a stir among the general public, intellectuals and pundits. There is speculation and heated criticism even before the film has actually been seen _ the film has been censored at a few points, with sound muted. To many, there are probably only two ways this film is going to turn out: a move subject to a reaction of colour-coded resentment or a brave mission that dares to address issues we most need to hear but which nobody has the courage to say.

The narration starts at the 1932 Siamese Revolution that transformed Siam, as it was known, from absolute to constitutional monarchy. As the narrator's voice fills in the detail, all significant episodes of our democratic voyage are recounted and discussed through interviews with many prominent Thai thinkers, writers and academics: Sulak Sivaraksa (sharp, take-no-prisoners funny), Thongchai Winichakul (enlightening), Jiranan Pitpreecha (on-the-ground experience during October 1973), Prinya Thewanaruemitkul (clear-eyed), Worachet Pakeerut (passionate, informative), to name just a few.

The interviewees _ who make up the film's gripping rhythm _ dissect the transformation through various notable historical and political events like World War II, the 1947 coup d'e{aac}tat, the Oct 14, 1973, student uprising, the Oct 6, 1976, massacre, the Thaksin Shinawatra government's rule from 2001 to the coup d'e{aac}tat that ousted him in 2006, and up to the present day.

"For me, it started with the frustration of not knowing which side to choose," says Pen-ek, referring to the political divide. "I didn't have enough information to decide and I felt like I had some sort of defect because other people surrounding me could choose which side they wanted to support."

As for Pasakorn, it started when Yingluck Shinawatra was elected prime minister. 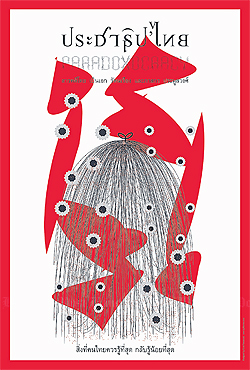 Prachathipathai
(Paradoxocracy) will be screened from June 24 to July 10 at2pmand8pm only at Paragon Cineplex and Esplanade.

"Before that I didn't care about politics and I hadn't read the newspapers for several years. But when she got elected, I was like, 'Who is this woman?'. Then I started reading the newspapers again and I started to feel uncomfortable with all the chaos, the roadblocks, the street protests and what various groups of people were saying. And I started to wonder if we were playing by the same rules. And if those rules were democracy, I wondered whether it was the same democracy we were talking about."

Unlike other documentary filmmakers who set out to portray a subject they specialise in, this project started out as both directors attempting to find out what democracy really is and understand what the ongoing political chaos is all about. The directors admitted that what drove them to the project was that insistent demon of curiosity.

''We were very naïve when we first started out.'' says Pen-ek, who's well-known internationally as a filmmaker with a dark sense of humour. ''The information and the truths we were faced with from the people who really know their subject sometimes got us so depressed that we didn't want to go on. For every landmark event there is always more than one set of truths.''

Democracy is such a vast and difficult subject, and the first challenge for them was to find the right place for the narration to start.

''The origin of democracy dates back as far as the classical era of ancient Greece,'' says Pasakorn. ''Each academic has his own starting point. Some say that our country has had it since the reign of King Rama V. We start at 1932 so that our film will have a definite shape, and whether the 1932 transition from an absolute monarchy to a constitutional monarchy was too early or too late for our country is an interesting key question for our film to begin with.''

The idea for the film title Paradoxocracy comes from the interview with Thongchai, an eminent academic. In the movie, Thongchai explains that the road of democracy is full of paradoxes _ for example, how the 1932 Revolution can be viewed both as the birth of democracy and the advent of military dictatorship. The key question that has been debated over the years regarding whether the 1932 Revolution was an act of ''picking the fruit before it's ripe'' _ in short, whether Thai people were ''ready'' for the new system _ is a key concern that resonates throughout the film.

For a story seemingly heavy in history and politics, Paradoxocracy is surprisingly easy for the audience to follow, even for those who have never been interested in the subject. With rare photographs and old news footage, the audience is guided from period to period. If the chairs in the cinema were straight and wooden, and the popcorn wasn't allowed, it could feel like a history class at school, only much more enjoyable and with a lot of teachers taking turns talking to you.

And yet, the question being thrown around _ typical of the paranoid mindset and prejudices of today _ is whether the filmmakers are inclined to any colour-coded ideology. In short, is this a yellow-leaning or red-leaning film? And despite repeated statements from the directors that their film came out of interest and curiosity rather than ideology, the speculation has been intense.

''When awakened politically, it's impossible to stay unbiased,'' says Pen-ek. ''The history, the route of democracy makes it hard for us to stay so.

''What we have been trying since the start though is to always be aware of what we are doing and never let our emotions get involved.'' Not only does the film make it clear that each interviewee seems to be speaking from beyond the simplistic red-versus-yellow divide, they also encourage understanding rather than trying to assign blame, even though they probably could if they wanted to.

For example, when some interviewees criticise Thaksin it's not only to lay blame for what he did but also an attempt to understand his motives and even speak about the good side of him as well. Then there's another paradox within the film: the sound in some parts of the documentary are muted and the accompanying English subtitles are crossed out. It is a paradoxical twist within itself. A film about democracy doesn't get the full right of democratic freedom of expression. And yet with the censorship, Pen-ek believes that the film feels even stronger since it creates a sense of mystery, and the message of the story attains a strange meta quality.

Another unusual appeal of this documentary is the way we can in some ways relate to the directors. We hear them ask questions and sometimes get confused with what they are hearing. This puts them in the same position as the audience _ not as storytellers but as beginners who are eager to learn.

As for their hopes of what the audience will get after watching the film, Pen-ek says that it's more suitable for those who know little and are confused about the situation.

''But for those who have already chosen their side, it's going to be useless. We hope people come to see this with their minds open. This is just to ignite them to be more interested in the subject and go further into it on their own.'' 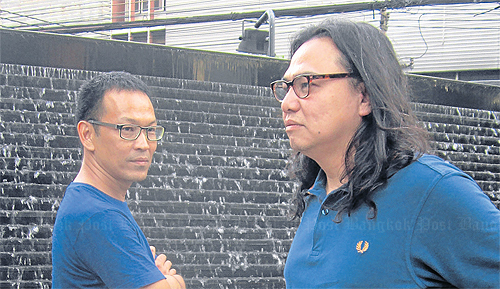