We join the hysteria over Thailand's favourite melodramas

Lakorn, popular Thai TV soap operas, are a national pastime enjoyed by many. Even if you're not a fan, you won't be able to escape them with your friends confessing their love for phra ek (male lead) on Facebook daily, or the recapping of last night's episode at lunch. There's no denying that lakorn are an unshakable part of contemporary Thai culture. Since you can't avoid them, we here at Guru have come up with some lakorn-inspired games that all can enjoy. We have also dug up some unbelievable facts and drama that surround the cultural staple. 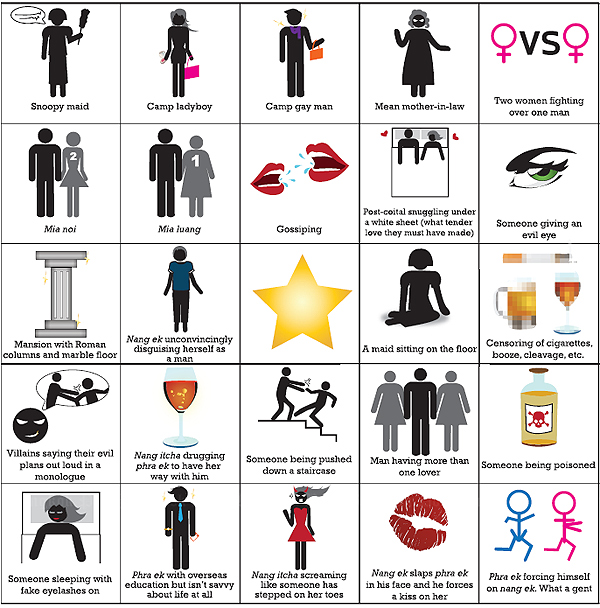 Thai soap operas usually have a happy ending in which the phra ek and nang ek (female lead) get together and live happily ever after despite the nang itcha or nang rai (bad girl who does anything to bag the phra ek) stirring up trouble and getting what she deserves in the end. If you're a lakorn fan, you know your lakorn cliches by heart. If you're not a fan, you've probably made fun of these cliches before. Put these abilities to good use by spoting unique characteristics of Thai lakorn to gain the satisfaction of winning in our very own bingo game.

3. All players watch an episode of lakorn together.

4. When a player notices a cliche, he/she crosses the box out. That means you're out of luck if you fall asleep five minutes in.

5. The star in the middle is a freebie.

6. The player who completes the first horizontal, vertical or diagonal line wins.

Say what you will about Thai soaps, this form of entertainment has been around long before you. Here's our timeline of significant events related to the development of Thai TV series.

The rise of pre-recorded TV soaps. The first TV adaptation of Taddaobussaya is made and becomes among the first soap operas to be popular among Thai viewers. It's about Taddao, a woman from a poor background whose father is a filthy rich man. She is forced to marry a man because her mother has a gambling debt. However, she ditches the wedding, becomes a drag king in the quest of claiming her share in her dead father's fortune and also falls in love with the phra ek whom she first hates (drama, much?). It has been adapted for TV five times, the latest remake done in 2010.

TV soaps begin being aired after the evening news (around 8:30-10:30pm, which still happens today) after the National Telecommunication Commission urged TV stations to air Thai programmes instead of foreign ones.

Lakorn are influential and can stir up strong reactions in Thai viewers. Take these dramatic episodes as examples. 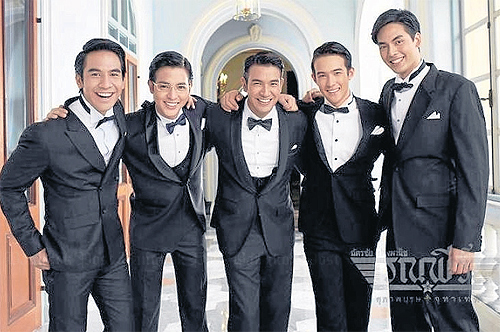 Proud Thai parents usually rack their brains for the right names for their children or ask Buddhist monks to come up with auspicious ones. However, according to a Matichon report released last week, many Thai parents have named their boys after five popular khun chai from Suparbburuth Chutathep (The Gentlemen of Chutathep) shown on Channel 3. The period series revolves around five aristocratic men with ratchasakul (a surname that indicates they are descendants of members of the royal family). The Department of Provincial Administration said that over the past two months, over 1,000 newborn baby boys have been either named after these characters or the name of the serial itself (Chutathep).

It sounds harmless enough, and it's probably better than being named Bella or Twilight. Of course, your parents meant well in giving you such a name but imagine what undue pressure they have put on you. What if you can't live up to the khun chai image? What if you want to rock a goatee? Also, what will happen when a character in a future lakorn with the same name is a SOB baddie? 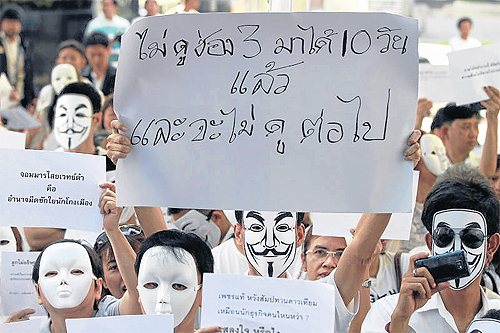 When Channel 3 decided to pull the last episodes of action/drama series Nua Mek 2 due to "inappropriate content", it led to a Facebook campaign group and a protest. About 200 people voiced their disapproval in front of the channel's headquarters on January 13 against what they viewed as self-censorship due to the political undertones of the series. The soap is about a corrupt politician who recruits the help of a sorcerer to slyly obtain a satellite concession. The protesters also believed that the cancellation was due to pressure from politicians. Making their disapproval more dramatic, the protesters wore Guy Fawkes masks or other kinds of white masks. We suspect that not receiving closure to a series they had been following was enough reason to stage a protest. We even thought about protesting the non-ending of The Sopranos at one point. 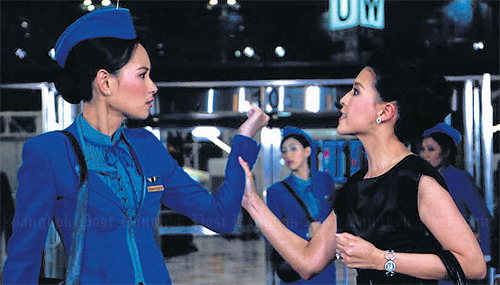 Songkhram Nang Fah (Battle of Angels) is allegedly about real-life drama that goes on behind the usually proper image of female air hostesses. It depicts envy between the stewardesses, a pilot with a gig, his wife humiliating his gig, and another pilot who is a serial dater. After the series aired in January 2008 on Channel 5, members of Thai Airways's labour union set a press conference to protest the series, saying it was based on false information and taints the usually good and clean reputation of Thai female flight attendants. They demanded that the creator of the series alter the plot and make the uniform of the stewardesses more modest. The author of the original story claimed she wrote it from experiences during her time as a female flight attendant. The soap's director agreed to adjust the content of the series. If everyone is going to be this overly-sensitive, then where would the drama and fun be? In late April 2011, Dok Som See Thong (Golden Orange Blossom) on Channel 3 became the talk of the nation after people complained about it on the Ministry of Culture hotline (who knew there was one?). The source of their discontent centred around a fictional biotch named Reya. She doesn't respect her mother, dates different men, and resorts to underhanded means to get what she wants. The concerned parents feared their children may imitate the character. Some even called for a ban of the series. This soap opera was originally rated for viewers of 13 years of age and over but was later re-rated to 18+. Some scenes were cut out. On that note, why don't we ban a man having more than one wife in lakorn too so boys can grow up to be gentlemen?G

Kom Chad Leuk reported that a 12-year-old girl claimed she stole from a neighbour to buy accessories so she could look like dara (actors and actresses). In November 2009, Pim (not her real name) was caught by a neighbour, Vinai Chanpraderm, who came home to find his house had been ransacked. He also found Pim hiding in a room where he stored rice bags and she was wearing a bracelet that belonged to his daughter. He took her to the police and mentioned he had been robbed of thousands of baht and accessories seven times before and he believed the culprit is Pim. According to Pim's adoptive father, she turned bad after watching too many episodes of Thida Wanorn (Jungle Girl) on Channel 7, which is about a girl raised by orangutans. She's not feral, though, and the female lead of the show falls in love with an outdoorsy guy. The father claimed Pim had been so obsessed with this lakorn that she started to climb trees and roofs and paid no attention to school. He also said Pim had stolen from people before, using her monkey-like agility for no good.

WHAT LAKORN CHARACTER ARE YOU?

Follow our flow chart to see who you would most likely be in a Thai soap. 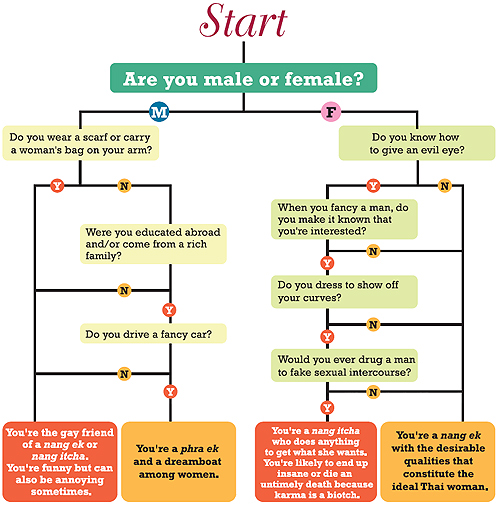