'Terminalia catappa' offers several medicinal benefits for folks as well as fish, with countries around the region celebrating it for its anti-pathogenic and anti-oxidant properties

Andre wrote from Ban Chang in Rayong to say that he wanted to get some dried leaves of Terminalia catappa, or Indian almond tree, for his wife's fish tank and asked where he could get them. I suggested that he find a tree and pick up the leaves that had fallen from it. If Andre cannot find a tree in his immediate neighbourhood, Wang Kaew Beach Resort near Laem Mae Pim in Rayong has several Terminalia catappa, known in Thai as hu kwang, by the seaside. Leaves fall every day, so I'm sure he will be able to obtain what he needs there. All he has to do is to dry them a bit more and they won't be any different from dried hu kwang leaves sold at some shops selling Siamese fighting fish at Chatuchak Weekend Market. 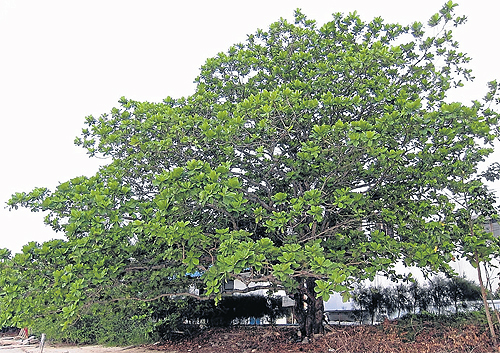 STRONG SILENT TYPE: Planted by the sea, the Indian almond tree, or ‘hu kwang’, is effective as a windbreak and in the prevention of soil erosion.

In their natural habitat, freshwater fish feed, hide and spawn among leaf detritus on the river or stream bed, but there is one other reason why tropical fish breeders and hobbyists put dried hu kwang leaves in their fish tanks. Terminalia catappa leaves have been found to have anti-parasitic, anti-bacterial and anti-fungal properties, and thus keep the water free from pathogens, resulting in healthier and stronger fish. What's more, some breeders believe that the leaves induce the fish to spawn.

The leaves turn red or orange before they fall from the tree, and the ones best suited for fish tanks are those that have fallen naturally, not ones picked from trees and dried. The leaves contain tannin, which causes the water to turn brown, so use them with discretion or the water will turn too dark for you to see the fish in the tank. A friend who raises aquarium fish for a hobby says that half a leaf is enough for a jar containing one Siamese fighting fish; you may add more if your tank is big. 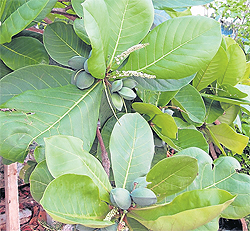 LEAVE IT TO THEM: The leaves, bark and fruit of the Indian almond tree have many medicinal uses. Dried leaves are used in the treatment of water in fish tanks.

Fish are not the only creatures that benefit from Terminalia catappa. According to GlobinMed, the Malaysia-based global information hub on integrated medicine, the young leaves, bark and fruit are used for the treatment of dermatitis and fever in India, Philippines, Malaysia and Indonesia. In Sri Lankan Ayurvedic medicine, the tree's leaves, fruit and bark are used as a remedy for dysentery, gonorrhea and skin ailments including scabies.

The leaves are used as dressing of rheumatic joints and to treat coughs, asthma, leprosy, travel nausea and eye problems, and to get rid of intestinal parasites. The young leaves and fruit are used for pains, including headaches and colic. In Taiwan, India and the Philippines, a decoction from fallen leaves is used as a herbal remedy for preventing and treating hepatitis and cancerous tumours in the liver.

An Indian study which concluded that leaf extracts have stronger antibacterial properties than commercially used antibiotics provides scientific support for the use of the tree in the traditional treatment of diseases. Meanwhile, researchers at the Institute of Genetics, National Yang-Ming University in Taiwan found that the major tannin component of the leaves, called punicalagin, has anti-oxidative properties that suppress the formation of cancer-causing free radicals in the liver.

Both water extract of Terminalia catappa leaves and punicalagin were also found to have potential in the suppression of lung cancer, with a 2.6-fold reduction in small solid tumours observed in mice after 30 days of treatment. Tests on rats found extracts from fresh, green fruit to be effective against diabetes; researchers observed a dose-dependent fall in blood sugar levels of 25-62%, with the maximum effect seen after 15 days. Other studies showed the fruit's ellagic acid suppresses HIV, and that seed kernels exhibit aphrodisiac activity in rats. In Taiwan and elsewhere the kernel is believed to be useful in the treatment of certain forms of sexual disfunction, including premature ejaculation.

Terminalia catappa is distinguished by its horizontal, layered branches when young, but the layers gradually disappear and mature trees have a broad spreading crown. The leaves are leathery, large and clustered, and the flowers are individually small. The almond-shaped fruits turn yellow or orange before falling. The fleshy shell is rich in tannin, but the kernel inside is edible and has an almond-like taste.

A spreading tree growing up to 30m high, Terminalia catappa is a beautiful shade tree but it has an extensive root system so do not plant it close to your house. For those who live near the sea, it is effective as a windbreak and in the prevention of soil erosion. A deciduous tree, it sheds its leaves twice a year.