The thais that bind on streets of sydney
Life
Social & Lifestyle

The thais that bind on streets of sydney

Ask any Thai living in Sydney where to find fresh ingredients needed for Thai cuisine, and they will point you in the direction of Campbell Street, not far from the Central railway station. Campbell Street is so dominated by Thai businesses that it goes by the nickname Thai Town. Copies of the Bangkok Post and Thai-language newspapers and magazines can be bought in any one of the half dozen Thai grocers that stretch the length of the street. 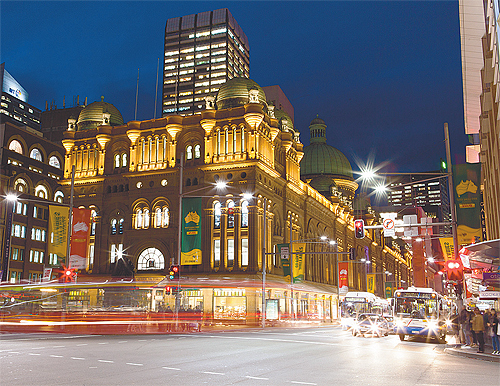 The number of Australian citizens of Thai descent have more than tripled in the last two decades. The latest census, held in 2011, said there were 45,465 Thai-born people in Australia, with tens of thousands more in the country as temporary students or Australian-born of Thai descent. It's estimated there are as many as 100,000 people of Thai descent living in Sydney, making it by far the largest concentration in Australia.

To help foster a broader sense of community in the city, the Thai consulate organises a ceremony and invites popular Thai-based singers to put on a concert every year. Local bars and pubs feature live Thai rock and pop bands on Sunday nights for a predominantly twenty-something Thai audience. One man working at a mobile phone business on Campbell Street proudly advertised that his was the only store in Australia run solely by Thais and operating for a Thai customer base.

Many Thais come to Sydney to attend university or study English and then decide to stay because of work, the easy access to Thai food and the relatively short journey time to Thailand by plane.

Take Kung for example. Travelling to Sydney three years ago as a 24 year-old English-language student, she now divides her time between working as a barista in a Thai cafe and restaurant in Campbell Street and spending time with her Thai and Aussie friends.

''I wanted to improve my English skills. Now I love living in Sydney,'' she says while making a Thai-style coffee for a customer. ''There is a real sense of Thai community in Sydney _ we have concerts and parties celebrating important dates for Thai people here, like Father's Day. Every year we also get together at Darling Harbour and celebrate Songkran together.''

Now 27, Kung said she was amazed at how many Thais live in Sydney when she first arrived. ''I couldn't believe the number of Thai businesses in the city. There must be thousands of Thais just in this area,'' she said.

Kung doesn't miss the food back home because, she tells me, she can get Thai food that's just as good anywhere along Campbell Street. ''I think Thai food is as good here as back home. The ingredients are the same and just as fresh _ we get a lot of them from Queensland.''

Kung can also get the latest movies and television series from one of the dozens of small Thai-run DVD shops spread throughout the city. A woman working at one of these on Campbell Street said they have at least 60 customers a day.

Happy as she obviously is here, Kung said it's ''shocking'' how expensive Sydney can be to live in. Thai aubergines sell for A$6.50 (185 baht) a kilogramme at one of the local Thai grocers; chillies are around $6/kg. A dish of pad thai can sell for as much as $20, and a small bottle of water is at least $3.

''There's a little part of Thailand right here in Sydney,'' Amy Chanta tells me. She should know. The owner of six successful Thai restaurants, Amy has lived in Sydney for more than three decades and was a pioneer in the city's Thai food scene. 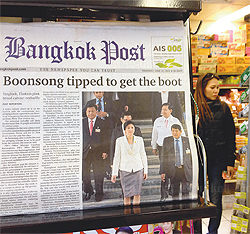 ''Thai Town is just beginning. At the moment it's condensed into one area in the central business district, but it's booming. In less than 10 years dozens of businesses have gone up and now you can find fresh ingredients for Thai foods grown locally, when before you had to import them from Thailand.''

Besides supporting a family and developing six successful restaurants over the past 23 years, Amy is the publisher and owner of a free local Thai-language community newspaper called Thai Press, and runs a website (natui.com.au) catering to Thais looking for work and accommodation in Sydney.

There are 60,000 registered members of the website which gets over 10,000 visits per day. Amy says she started the website for Thais trying to make it in Sydney and provide support mechanisms that didn't exist when she first arrived in the early 1980s. Her family also runs a travel agency for people looking to travel to and from Thailand.

Two years after arriving in Australia with $300 to her name, Amy finally had enough money to bring over her young children, son Pat and daughter Palisa. She worked in low-paying jobs while improving her English and managerial skills along the way.

''I was very homesick when I first arrived here all those years ago,'' said Amy. One of the main reasons she missed home so much was that it was impossible to find decent work in Sydney as a Thai immigrant.

''In the past, Thai people would arrive in Australia without knowing what they could do to earn an income. Now they find a job before they even arrive here, through websites like mine,'' said Amy. ''Each part of my business is there to give opportunities to fellow Thai people.''

The first Chat Thai restaurant opened in 1993. Palisa, 32, remembers her mum toiling day and night to establish the business, and spoke of her with admiration. ''Mum is from such a grounded place ... she was always working to keep the business alive and support us.

The most famous of Amy's five Chat Thai restaurants on Campbell Street came later, in 2006. Crowds now queue for a table, but it started from humble beginnings.

''When we first set up in Campbell Street it was in an old decrepit and dirty duck shop,'' said Palisa. ''But my brother is an architect and he completely redesigned the interior of the building. Mum wanted a nice environment for people to eat.''

Inside the sleek, multi-storey restaurant on Campbell Street, Amy Winehouse blasts from the stereo system as chefs bellow instructions in Thai.

Palisa laughs as we try and communicate over the din.

''Really, this place is like a little slice of Thailand,'' she says, adding, ''The Thai community in Sydney is very tight.''

After 20 years of working in the family restaurants, Palisa says that many of the staff are like extended family as they've been with them for more than a decade.

THE STUDENT WHO CAME TO STAY

Wilailuck, 34, moved to Sydney from Phuket in 2007 to work on a master's degree. While studying, she worked at her uncle's Thai restaurant. Over the last six years, the business has been remarkably successful, with another three restaurants opening up around Sydney.

''Sydney is great for us _ we can order Thai basil and fresh lemongrass from northern Australia and get it delivered here. We just have to walk down the street to buy good, fresh chillies and other ingredients from Thai Town.'' 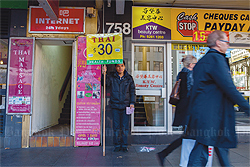 Westerners make up the majority of customers, but Wilailuck says that around a third are Thai. ''We try to present authentic Thai food. If the menu says the dish is hot, then it really will be hot, like the proper Thai style.''

She says she doesn't get homesick, because her brother and uncle live here, but many of the staff find staying away from home unbearable. ''Some only work here for a few months and then go back to Thailand because they miss home too much.''

Her family's restaurants employ people from Isan, Bangkok and all over Thailand.

Wilailuck is in Australia on a working visa and will apply for citizenship in the next two years. She has big dreams for her young niece and nephew in Thailand, and hopes she can bring them over to go to high school in Sydney.

But not everyone who studies in Australia decides to stay.

''Thailand is my country,'' Champ tells me proudly. He's a 24- year-old English-language and business student at a college in Sydney's inner-city suburb of Redfern. He's been studying in Australia for four months and helps to advertise a Thai massage parlour close to Campbell Street to make money.

Champ misses his friends and family, but says he likes studying in Australia. ''It's easy to get good Thai food, and you get a better wage here. In my English class of 16 students, 15 are Thais,'' says Champ. He says he came to Sydney to gain life experience, and having an aunt and uncle who live in Sydney made things easier.

Like Kung, when he first arrived, Champ was horrified at the prices in Sydney. ''Here it's $60 for a one-hour Thai massage!'' He was concerned about making ends meet, but knew he could rely on his aunt and uncle and his Thai friends.

''It can be hard for many Thai people when they first arrive here because everything is so expensive. I live in an apartment in the middle of the city with six other Thai students. It was almost like coming to a smaller Thailand! You can easily get along by only just speaking Thai in this area.''

Using her successful business in Sydney as a financial springboard, Amy has decided to invest in her homeland. Last year she bought 55 rai of farmland in Prachuap Khiri Khan province to grow coconuts, and she has plans to open a restaurant there also.

''Now my dream is to organise volunteers from Australia to go over to Thailand and teach English, and give a sense of the wider world to Thais back home,'' says Amy, but she obviously feels like this is home.

''Thai Town is more like a village, we can walk down the main street and say hi to anyone. Everyone knows each other well. Thai people are strong _ if we work together things will only get better here as time goes on.''

Amy recalled how the Thai community got together for His Majesty the King's birthday last year. ''It was great,'' she said, ''everyone came together that day. Even red shirt and yellow shirt supporters got along fine.'' 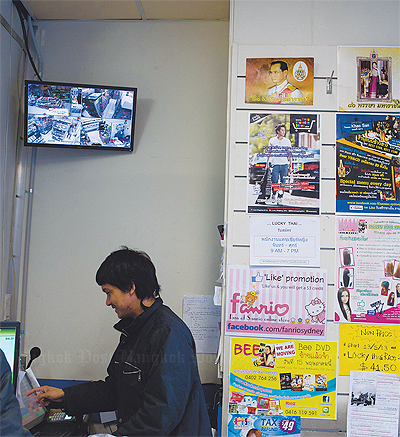 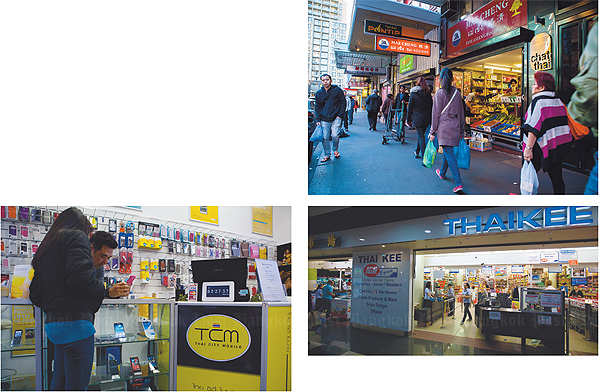 TRANSFERRING THAINESS: Clockwise from top, posters from Thailand, including of the King and Queen, hang on the walls of a Thai grocery store on Campbell Street; street scene in Thai Town; Thai Kee Supermarket; Thai-owned mobile phone business on Campbell Street, the only one of its kind in Australia. 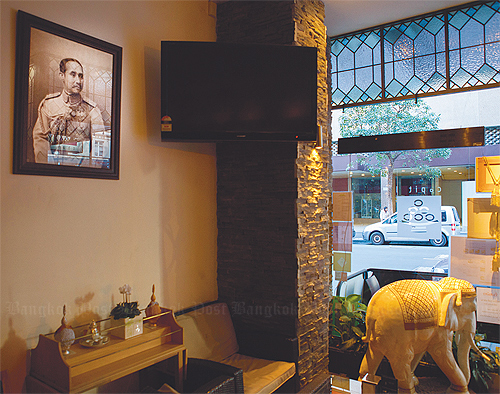 ROYAL GAZE: A portrait of King Rama V in a shop on Campbell Street. 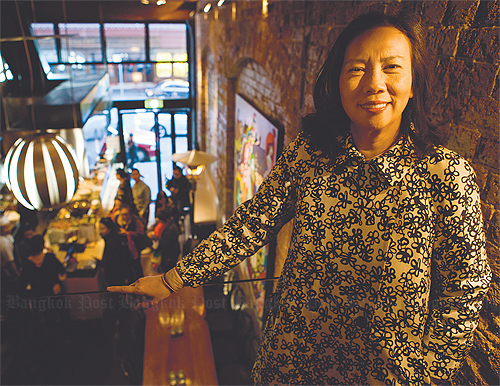 Amy Chanta, the owner of the six Chat Thai restaurants, is a pioneer in Sydney’s Thai food scene. 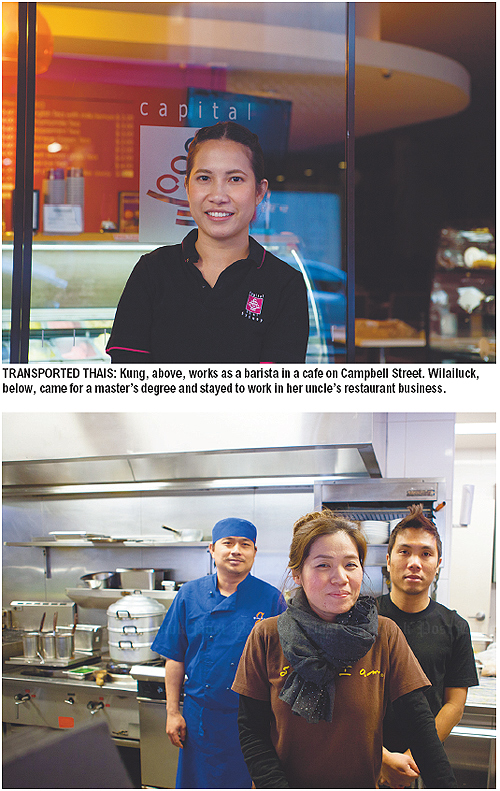 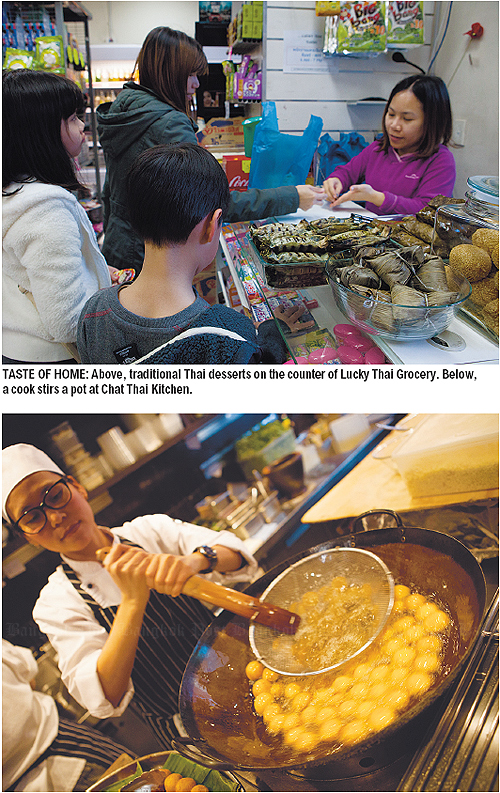 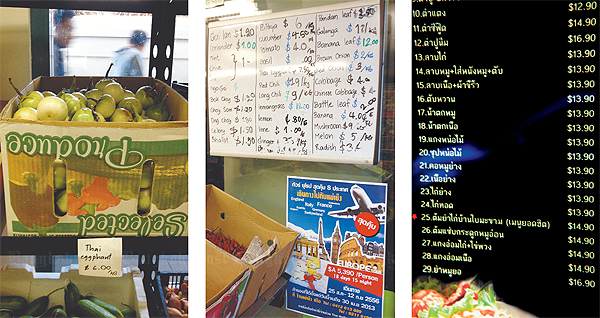 INFLATIONARY INFLUENCE: Above, left to right, there is no shortage of Thai dishes, fruits and other food items in Thai Town, but unfortunately they come at Sydney prices.