If we had to name one ingredient whose use has mushroomed most rapidly on the domestic gastronomic scene in recent years, it would definitely have to be the ... ahem ... mushroom. 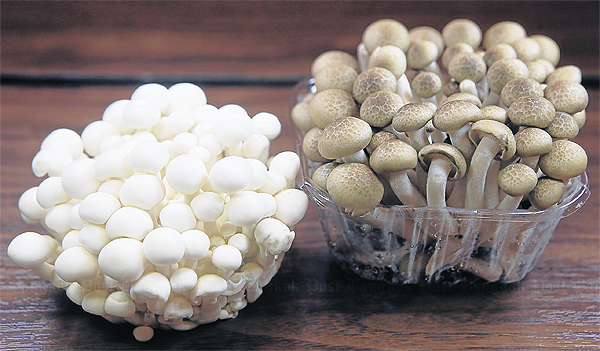 Perhaps because of the dizzying variety of shapes, shades and textures available, fungi have become household staples and street-side favourites, graduated to specialty status in restaurants and are sometimes even the highlight at well-heeled epicurean events.

Once a low-profile constituent in nondescript dishes _hed fang in kaeng jeud consomme, for instance, or Jew's ear mushroom in phad phak (stir-fried vegetables) _ mushrooms are increasingly perceived by home cooks as a sumptuous source of nourishment, ideal for both children and elderly relatives thanks to their generally mild flavour and soft consistency. As a result, many Thai families have now expanded their culinary horizons to regularly consume relative newcomers like golden needle, eringi and yanagi, alongside more familiar varieties like straw, shiitake and oyster mushrooms.

This evolution in popular tastes is also accelerating in the food-service sphere. Mushrooms of many types can now be enjoyed, 24/7, from ground level right up to pricey rooftop establishments. Lately, the ranks of street carts selling gai yang seem to have thinned out to leave openings for a new generation of food vendors offering yum hed (sour and spicy mushroom salad, typically prepared with a melange of golden needle, Jew's ear, white coral and buna-shimeji varieties); takers for this considerably more healthy dish range from office workers and students to manual labourers and after-dark bar-hoppers.

Meanwhile at five-star food outlets, Western species like chanterelle, morel, black trumpet, portobello and truffle are appearing on menus more often. Mushrooms have long been a celebrated element in pasta dishes and a common side vegetable for prime steak, but are now also appearing as accompaniments for seafood or being served on their own, with little adornment, as sublime vegetarian fare. The term "foraged mushroom", referring to seasonal fungi gathered in the wild, has now entered the high-end culinary lexicon and it invariably draws the attention of discerning diners.

With the selection of fresh varieties available multiplying to a mind-numbing degree in recent years, mushrooms are taking up a lot more space than ever before at fresh-produce markets and upscale gourmet food shops alike.

According to Supawut Chaiprasitkul, general manager of the supermarket division at The Mall group, the number of mushroom species the firm's stores stock has increased from less than 10, two decades ago, to some 30 types currently. Where before the choice was limited to a few fresh and dried varieties, nowadays there is demand for a wide variety of fresh mushrooms as well as mushroom-based drinks and even mushroom supplements, both locally grown/produced and imported, he said. 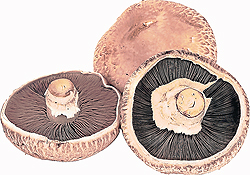 "Recently we introduced ready-to-eat, Thai-style mushroom dishes in our hot-food section and the feedback has been extremely good. We have mushroom curry, mushroom chilli paste, mushroom soup and mushroom yum. And mushrooms don't just appeal to housewives, but to elderly people, teenagers and expats as well."

While palatibility may be a significant factor in the phenomenal increase in their popularity, no discussion of the subject would be complete without a mention of the health benefits of mushrooms.

According to Dr Anon Auetragul, a specialist in this field, the growing trend in recent years towards more health-conscious lifestyles has led people towards what he terms "functional food". Since mushrooms help to prevent disease, in addition to being tasty and budget-friendly, they are an ideal alternative for anyone interested in foods known to have beneficial health effects, he noted.

Pharmaceutical tests have proven that mushrooms have various medicinal properties; they contain substances like betaglucan, polysaccharides and lovastanin which can help reduce blood sugar levels, are anti-inflammatory and boost the immune system, said the founder of Thai Biotec, an organisation that promotes mushroom cultivation.

"Not only are mushrooms very high in protein, they are almost fat free. They are also very safe to eat since no chemical fertilisers or pesticides are used in their production," Dr Anon said.

"Mushrooms are very easy to grow _ and you don't need to be blessed with good weather either: there's no need for sun or rainfall or soil, even. And no need to use chemical fertilisers or pesticides. They are completely [artificial] chemical-free produce.

"In fact, growing them is an ideal occupation for hobbyists since they take up so little space; you could even raise some in your bathroom. That's why millions of people are so into growing mushrooms at the moment."

The big increase in small-scale mushroom growers is another indicator of the current fascination with edible fungi. Over the past couple of years, DIY mushroom-growing kits sold at stalls in farmers' markets have never failed to spark interest, drawing curious kids as well as the grown-ups.

Marayat Iammongkolsakul of Marayat Farm is something of an aficionado. She began cultivating mushrooms for household consumption 10 years ago because she was concerned about the hygiene of those sold in market at the time. What started out as a family venture has matured into a business that has inspired many imitators.

''As a small producer, we always keep in close contact with our consumers. Most of them are vegetarian and very health-conscious and they regard mushrooms as a good source of protein. When they learn that growing mushrooms is actually very easy, they get interested in growing some for themselves.

''Thanks are also due to that ongoing public campaign that encourages city folk to grow their own vegetables. More and more people are growing vegetables in their backyards and they often include mushrooms in their endeavours. Fungiculture is also becoming a popular hobby for children since it requires so little effort. We have lots of kindergarten-age regulars who buy mushroom-planting kits from us and then enjoy successful harvests,'' Marayat enthused.

According to Dr Anon of Thai Biotec, Thailand produces half a million tonnes of mushrooms annually, but this is not sufficient to meet domestic demand.

''Thais love eating mushrooms. Right now we are importing a lot from overseas. Domestic consumption of mushrooms has increased from 235g per person back in 1972 to 5,000g currently, which is close to the level in developed countries.''

Most of the mushrooms available here at the moment come from China, Dr Anon pointed out, adding that the most common imports are eringi, golden needle and buna-shimeji. But the classic hed fang (straw mushroom) is still the most popular variety among Thais, apparently, with our country being the world leader in cultivating them. Of the 350,000 tonnes of straw mushrooms grown commercially here each year, however, most never crosses the border; the lion's share is consumed right here.

Dr Anon is, not surprisingly, also a big fan of fungi. He is very fond of eating a variety called hed khone noi (bigelow mushroom), but the species that impress him the most are shiitake and the bamboo tissue mushroom, both of which he grows himself. ''These two types have the best flavour and give me the most energy,'' he reasoned.

Presently, a whopping 98% of the mushrooms consumed in Thailand are commercially cultivated, so there's no need to be anxious about the possibility of accidental poisoning, Dr Anon said. The people who need to be vigilant, he continued, are residents of rural areas who pick mushrooms in the forest.

''Some mushrooms categorised as 'toxic' may only be hallucinogenic, meaning they have [temporary] mind-altering effects. But there are a number of others which, if ingested, can permanently damage your liver and kidneys.''

So what happens if you should accidentally eat one of these poisonous mushroom? Well, depending on the type, Dr Anon explained, symptoms may occur within 15 minutes of ingestion. The immediate ill-effects can be relieved by inducing the patient to vomit, but he or she should then be taken to the nearest hospital as quickly as possible. Symptoms for some toxic species, however, only make an appearance 10 to 15 hours after ingestion. So if the unfortunate person has consumed a lot of the offending fungi, he said, the results could well be deadly.

''So unless you're absolutely sure that a mushroom you come across in the wild is safe, don't eat it. Not even if it's growing in your own backyard.'' 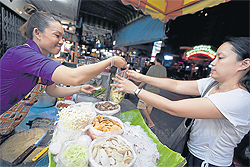 Lately street carts selling grilled chicken seem to give in to the new generation of food vendors offering sour and spicy mushroom salad.

With the varieties multiplying to a mind-numbing degree, mushrooms are taking up a lot more shelf spaces at local fresh markets and supermarkets than ever before.

commonly available at restaurants and supermarkets 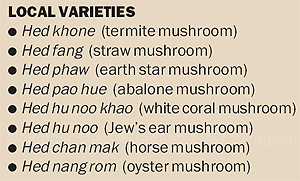