Fast and Furious 8: Life in the slow lane

After the No.8 bus was voted the worst in Bangkok in the transport minister's Facebook survey, our writer takes a ride and finds the complaints are not entirely fair

I got on a No. 8 bus the other day expecting to experience what people have been talking about this past week _ a nightmare. Taking a seat at the back, I braced myself for some action _ the sudden lurching off and slamming of brakes, cursing from the driver, yelling from the conductor, pulling up at the wrong spots, dropping passengers off in the middle of the road, and the speeding up and overtaking of other buses. 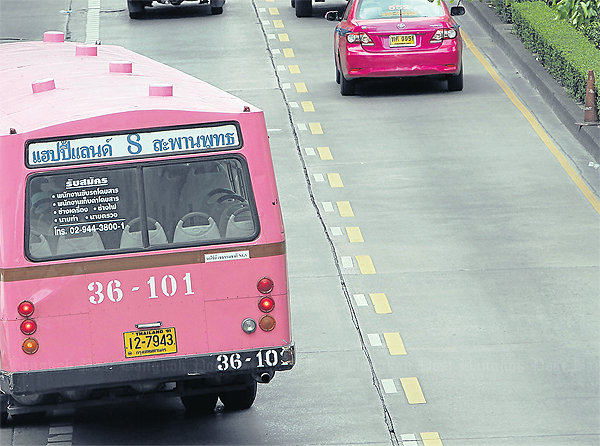 In short, I was looking for Fast and Furious set in Bangkok with the notorious No. 8 - voted the worst bus route in Bangkok for years, including in a survey revealed last week - leading the urban race as it plies the route between Memorial Bridge and Happy Land in Bang Kapi district. 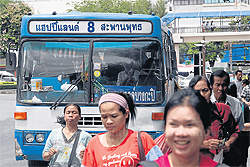 ROUTE OF ALL EVIL?

TO MANY commuters, Bus No. 8 is sometimes known as "the racer of Lat Phrao", a roller-coaster ride that spins and swerves and then "stops anywhere it wants in five seconds flat". Running from Lat Phrao Road, Phahon Yothin, Saphan Khwai, Victory Monument, Rama Hospital and ending at Memorial Bridge, the route is operated by six private companies that won a concession granted by Bangkok Mass Transit Authority (BMTA).

No. 8 is actually one of the oldest bus routes in Bangkok, starting in 1932. It was originally operated by the Nai Lert Company and ran a short route from the Royal Plaza to Memorial Bridge. The BMTA later took over and subsequently granted a concession to six private companies to operate the line.

No.8's infamy - either a reflection of reality or just a bad perception that got stuck - goes back a decade. Here's a quick recap.

2004: No. 8 ranked third in the survey of Bangkok buses that emitted the highest pollution.

2005: The Ministry of Transport's survey ranked No. 8 again as the route with the poorest services.

2011: A No. 8 driver raced against a No. 39 driver near Saphan Khwai, apparently to reach a stop and scoop up passengers. The No. 39 bus hit and killed a pedestrian. The Ministry of Transport said it would consider revoking the No. 8 concession.

2011: The Royal Thai Police found that violent student brawls took place most often on No. 8 buses.

2013: Transport Minister Chadchart Sittipunt conducted a survey on his Facebook page. From 1,600 respondents, No. 8 was voted the poorest in terms of services, followed by No. 44 and No. 1.

But five minutes later, the bus was pretty much where it was before. And even when the road was clear, this privately-run bus line was going ever so smooth and slow.

There's only one obvious explanation: the news of how it ranked as the bus line in most need of improvement in Transport Minister Chadchart Sittipunt's Facebook page survey has now rubbed off on the operators, and the drivers have learned to take more care.

It's unlikely, however, that this sudden change of behaviour will put an end to the bad reputation it has notched up over the years.

While the conductor was so nice to me even though I only had a 100-baht note for the 8 baht fare and kept asking about the route, another passenger I talked to had a different story to tell.

"The conductor was yelling at an old lady who got on the wrong bus," recounted Pratchaya Chaichana about some of his terrible experiences with this route. "The bus would cut in front of all the cars from the far right lane to the bus stop on the left. The driver was smoking, too. I was sitting right behind him. It was hell."

As the road got a little clearer around Lat Phrao, the bus sped up a little. Quite a few times it went off swiftly to the right to overtake cars, and there were a couple of occasions when it didn't drop the passengers off properly at a bus stop. Still, it was a far cry from what a lot of people have been saying and there's a possibility that you'd need to ride in the early morning or late at night for the bus to live up to its notoriety.

When asked his opinion about No. 8 and its ranking as the most terrible of all, passenger Suthirak Sukmak, who turned out to be an ex-conductor, got very heated - not because of how terrible the bus was but because of what people have been saying.

"It's not true," he argued. "I have been using it almost every day for seven years now. This pisses me off because when some people are dissatisfied with it, they just create a bad image for it even though some other buses are a lot worse. It's actually the drivers who get rebuked from the passengers if they are going too slow. Sometimes it zigzags a little but that's because the driver is worried about wasting the passengers' time."

I got off in front of Big C Lat Phrao to wait and try the next bus. There are more than 70 non-air-conditioned No. 8 buses in all and it took no time for the next to arrive. The result, however, was quite the same. It was going a little fast but this was no different to other buses. Several times the bus cut off to the right to overtake cars before getting back to the left lane. It could appear reckless, but you have to accept that it's the only alternative when there are always some cars, taxis and vans idling in the left lane, blocking the way.

Talking about the reasons behind Chadchart's survey results, a conductor who doesn't wish to be named assumed with a scornful laugh that people probably have too much time on their hands and they just use it to play Facebook.

''Other buses are doing the same thing but I don't see they get any complaints even though they use the far right lane to overtake other buses all the time,'' she said. ''We simply can't go straight when there are those taxis and vans parking. Sometimes the passengers are busy with their smartphones and they would ring the bell when the bus has already gone past the stop. We get complaints for stopping too suddenly and we get complaints for not dropping the passengers off properly.''

With a group of passengers waiting at the bus stop, you can really feel a sense of competition between buses that stand a chance of getting all of the passengers. Even though this could well lead to some serious crashes, especially if the road was emptier and the vehicles were moving faster, the jostling for position and fighting for passengers is not entirely incomprehensible from the point of view of drivers and conductors.

''We don't get salaries,'' explained a driver asked not to be named. ''We get 10% of the ticket sales revenue while the conductor gets 5%. If we get 5,000 baht a day, I only get 500 baht. There are more than 70 No. 8 buses, as well as plenty other buses from various lines. Think about how hard it is to get 5,000 a day at 8 baht a ticket. So when there's some bus about to take away our passengers, it's typical for us to try to overtake as well.''

From a quick look, it might seem that Chadchart's survey is a good, logical way to tackle the deep-rooted problems in Bangkok's public transport system. But thinking it through, it would have been more constructive and beneficial if he focused on how to improve buses in general rather than pointing the finger at the one that is supposed to be the worst, making it the focus of all the blame (before hopping off to research trains with nothing substantial yet done about bus problems he has found).

''Just this morning I was stopped by the police twice even though I did absolutely nothing wrong,'' said Somboon Saengchai, another driver who is feeling hurt by the widely publicised result. ''There are about 50,000-60,000 people using No. 8 buses daily and who knows how many millions by the year. It's not right to use a few hundred votes as a criterion. This is not fair.'' 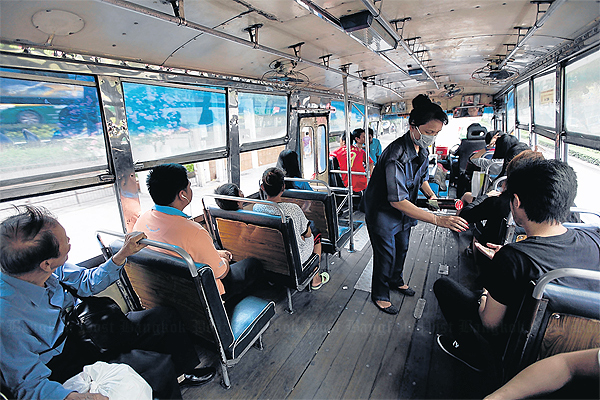 Life’s not easy for commuters of ‘‘hot buses’’, even less so for conductors and drivers who work in one.