Voice in the wilderness

Meet the outspoken Thammasat graduate who won a prestigious scholarship to study abroad; she has very definite ideas on how we might reform our education system, but can she get anyone to listen?

Recalling her nervousness six years ago when she was granted an audience with HRH Princess Maha Chakri Sirindhorn prior to her departure for the UK, Rattana Lao, recipient of an Ananda Mahidol Scholarship, said she was trembling as she listened to the instructions from a palace official: walk slowly, gently and calmly. 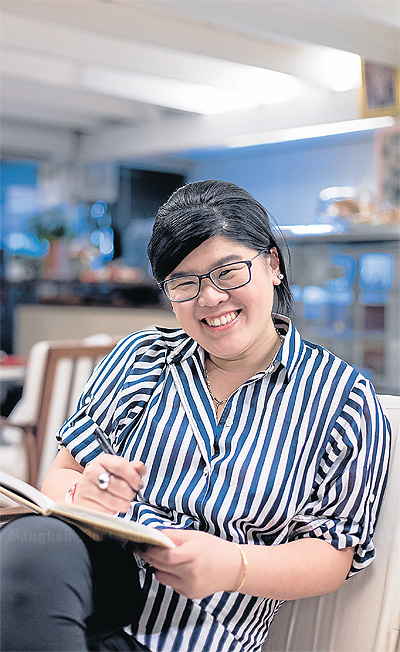 "Education," the Princess said with a smile. "You are interested in 'education and development'? Education for whom? Development for whom? If you were to educate my friends' children, they would need a British nanny so they could have a British accent. But if you educate my children in the far North, in the borders [of Thailand] and in jail, education for my children is basic literacy and numeracy."

That exchange got Rattana, now 29 thinking and motivated her to continue with post-graduate studies that have taken up the past seven years of her life.

Set up in 1955 by HM the King, the Ananda Mahidol Scholarship is awarded to high-achieving students who wish to further their studies in pursuit of a master's degree or doctorate in one of eight subject categories. The "Thammasat" (social studies) category, which Rattana applied for, accepts only applicants from Thammasat University. The candidates are required to submit a written proposal, in Thai, outlining what specific academic areas they would like to study and the name of the university they have chosen, to a university committee, which later interviews all the applicants. Only one name is selected for forwarding to the scholarship committee.

While recipients of the Ananda Mahidol scholarship are not required to work in the public sector after graduation, they are expected to make some positive contribution to Thai society. Rattana was the very first recipient of this scholarship who chose to study education. A rather unlikely choice, on the face of it, because she would be the first to admit that her years as an undergraduate were full of difficulties caused, in large part, by her tendency to challenge the status quo. Right from the start, on orientation day at Thammasat University, she displayed her willingness to openly express her views, in this case directing them at a speaker who had voiced his disappointment with Thammasat students, describing them as "simplistic" and "superficial".

"At the end of his speech I raised my hand," Rattana recalled. "I went up there, in front of all the students, and said that just because we are young and weren't born on October 14th [date of the students' uprising in Bangkok in 1973], and just because there was no protest for us to go to, that didn't mean we were simplistic or superficial or had no power. I said that it wasn't fair to use that event [the '73 uprising] and tell us that we are garbage, just because we hadn't died for anything."

Rattana went on to take British and American Studies at the Liberal Arts Faculty and became actively involved in college life, later joining with a few friends to found the Thammasat Speakers Union.

During her three and a half years at Thammasat, Rattana jokes that she probably spent less time in lecture halls than any other student, simply because she was always away taking part in debates, a regular member of teams which competed in national, regional and international contests.

Despite graduating from Thammasat with first-class honours, Rattana didn't entertain high hopes of winning an Ananda Mahidol scholarship. She thought it was probably way beyond her reach, a pessimism based on the bad experiences she had previously had with various government ministries and of being bullied at school simply because her surname is Chinese (she was born in Thailand but her father is of Chinese ancestry).

"All my life I'd been pleading with my dad to give me one thing: a long last name so I could be Thai. And he would say 'no'. But when I received the scholarship, everything changed. The most prestigious scholarship in this country does not discriminate against [ethnic] Chinese people born in Thailand. I thank the scholarship every single day because since May 19, 2006 I can be Rattana Lao without feeling like a second-class immigrant in my own home," she said with tears in her eyes."

The same two-tier system is endemic in the education system here, said Rattana, who identifies the main problems as the inequality of resources in different schools and the lack of opportunities for students from low-income families. And the state is doing very little to narrow this gap, she added.

"Rich kids pay under the table to go to state-funded schools and they get ahead because they are able to afford [to pay] one million baht a year [on their education]. This is unfair for the rest of the student body. If we can't stop the patronage system in education, there's no need to talk about anything else. If our society doesn't respect the concept of meritocracy, don't even think about going for higher ranking. We have a system that is worlds apart," said Rattana, who holds three degrees from foreign universities (in education, politics and economics).

"To me, anyone who says Thai education is terrible without giving a concrete recommendation on how to improve it, is simply taking a superficial view of things. Because every time they say Thai teachers are badly trained, or that Thai students are behind and not ranked internationally, they demoralise the entire system. And when a system suffers from poor morale, how can it continue?"

Two years ago, Rattana and several friends of hers set up a group called Unite Thailand. It aims not only to improve the Thai education system, but also to break the political deadlock currently affecting the country. She and her friends have so far organised eight events, involving a total of 1,500 children and lots of paintbrushes and blank canvases. The underlying idea, Rattana said, is that when people have fun together, they also tend to become more interested in each other and gain a deeper understanding of individuals from different social backgrounds and cultures. And when people are happy, then you can start talking about peace and tolerance, she added.

Rattana currently travels back and forth between Thailand and Hong Kong, as she is working as a researcher at the University of Hong Kong. She is in the process of writing a thesis on the logic of the Thai state and higher education reforms.

She's already reaching out to the younger generation, but what about the grown-ups; does she have any advice to offer them?

"First, I would like all adults to talk less and read more. Stop telling the kids that they read too little because a lot of the elite in our society, a lot of our policy-makers don't read enough either.

"Second, respect the kids. Children are sometimes smarter than adults. And as long as Thailand still has this whole patronage system in place, reforming Thai education will not be easy."

However, at the end of the day any policy can be used as a political tool, she pointed out. Politicians are not monks, she went on, so it doesn't make sense that we elevate politics above practically everything else.

"Policy-makers must prioritise the needs of students, teachers and parents and not put their own political agendas first. This would be the ideal situation."