Cruising around the Mergui islands off the coast of Myanmar, you could almost believe you were the last people on Earth

Just 70km off the coast of the southern province of Ranong lie hundreds of islands rivalling the beauty of Thai beaches and they are almost entirely untouched. The Mergui Archipelago _ a cluster of undeveloped Phukets in Myanmar waters _ could be Asia's next big tourist destination. 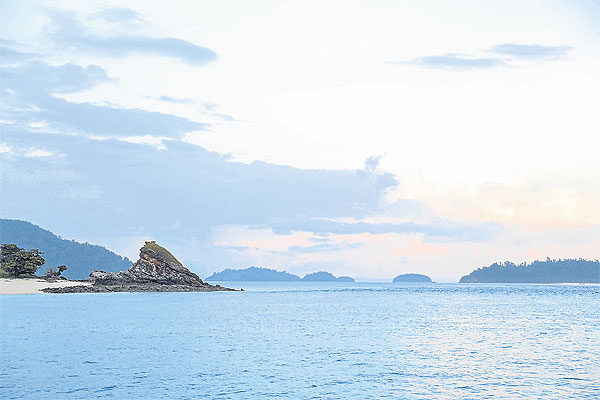 ALL AT SEA: The view from the boat, top, reveals untouched islands as far as the eye can see.

As Myanmar sheds its military dictatorship and creaks open to the world, tourists are quickly flooding in. The opening up of our Southeast Asian neighbour means new adventures abound right next door. It won't be long before the Mergui islands become an exciting alternative to Koh Tao or Phi Phi. So when I was invited to join the soft opening of a cruise on a 25m classic double-plank teak yacht exploring the 400km stretch of islands, I didn't hesitate to accept.

During the 17th century, at the height of Thailand's territorial expansion, the Kingdom of Siam claimed the city of Mergui, the mainland gateway to the islands. 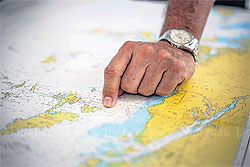 skipper Herbert Mayrhauser points out the route we are taking through the islands.

Now called Myeik, it was a port and trading hub. Three hundred years later, Mergui town is less busy and the islands remain isolated. It is a place for travellers obsessed with being "off the beaten path", "the first to set foot on" or "the only foreigner in sight".

Undeveloped, the 800-island archipelago has been explored by only a handful of anthropologists and scuba divers. It is home to only a couple of thousand sea gypsies and Myanmar islanders. Only about 2,000 tourists visit the area (most of them only to Kawthong for visa runs) each year, compared to the millions who flock to Phuket. There's nearly a whole island in the archipelago for every tourist couple. One of the islands is bigger than Singapore and according to some tour operators, wild boar still roam there. Others are little more than rocks sticking out of the ocean.

Although the Mergui islands have been accessible to tourists since 1997, Myanmar's old military government's reputation for brutality and the ever-changing and expensive process to obtain a visa and permit for the area deterred most tourists. A large naval base and military presence on some of the islands means permits are tightly controlled. Luckily, our cruise operators had already prepared documents for us so the permit process was relatively painless, taking about an hour. I'm told the immigration office had just moved to a different building and everyone's still getting used to using a computer _ a year ago it was all pen and paper.

The skipper, Austrian-born Herbert Mayrhauser, and business partner Janis Vougioukas are in Kawthong, our Myanmar port of entry, to see us through immigration and take us in their grey rubber dingy to the gorgeous Meta IV (get it?). The 15-year-old, Swiss-designed, Thai-made, 62-tonne boat has two masts and 320m2 of white sails to catch the island winds. It has a crew of four and can house up to eight guests. With shoes off and backpacks loaded, the yacht's engine starts and hums its way through the Kawthong channel and into the open Andaman Sea. 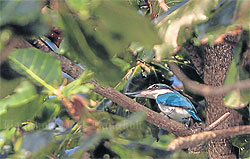 Vougioukas is the East Asia Correspondent for the German magazine Stern. He bought shares in the vessel earlier this year, balancing his passion for journalism and his love for sailing. Vougioukas says the Meta IV is one of the first boats to spend the whole sailing season (non-monsoon months October-May) on the Mergui islands and one of the few that will focus on excursions rather than diving (although dives can be arranged). Our trip includes all meals and "sundowners" _ cocktails infused with spices and herbs such as kaffir lime and cinnamon, served at sunset. Aside from our Thai crew, Aung Kyaw, a Myanmar Ministry of Hotels and Tourism officer, joins us. He makes sure we follow Myanmar regulations but also serves as a much-needed English-speaking interpreter and guide.

During our trip, we drop anchor at six islands and make land excursions to five. All but three of those islands are uninhabited. On Nyaung Wee island, 20 of the 80 households are Moken, an ethnic group who likely migrated from southern China about 4,000 years ago, according to a book by anthropologist Jacques Ivanoff. There, we saw a kabang, a traditional boat designed to sail across oceans. Older generations of Moken are born on kabang and live most of their lives on the wooden boats, depending on them for travel and shelter.

Hook, a Thai Moken who recently visited his relatives in the Mergui islands, says only four kabang are still in use in the area. The Moken here are brethren to Moken in Thailand. Some go back and forth between the two countries visiting relatives. They make their living catching squid and collecting shellfish. Yanat, a Thai-speaking Moken man on the island, says his brother still lives part of the time on the kabang but also has a house on shore. He says his parents were the last generation to live the true Moken nomadic life. 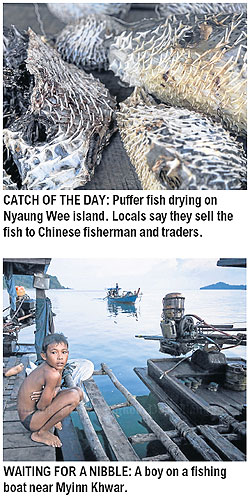 The beaches on all of the islands are coffee-creamer-white and the water jade-green. The sand is so fine it squeaks when stepped on. When the winds pick up, the crew unfurls the massive sails, letting the Earth's energy push us on our way.

Today, Macleod island is the only island in the Mergui Archipelago with an operating hotel. The Myanmar Andaman Resort has 22 rooms, boasting air conditioning, Wi-Fi and a spa. Adrian Zdrada, the resort's manager, says more than 400 tourists visited the resort last year and they expect a 30% increase this year. There are several snorkelling spots and more than 25 dive sites near the island, according to the dive master there.

As I snorkel through the clear water, I can see much of the coral has been destroyed by dynamite fishing and anchors. Despite that, numerous clown fish swim through the sea anemones. Angel fish, large parrot fish and cuttlefish swim past me. Renato Ticozzi, an Italian diver with 45 years experience, says the area has unique underwater boulders like the Mediterranean. ''This place has rock and coral and lots and lots and lots of fish.''

That night, as we ride the dingy to our yacht from Macleod island, our torches outlined a shadowy creature in the water. As it swam away, we see that it is a shark, about 50cm long.

The view from the boat is always breathtaking. As we weave through the islands, we see strangler figs wrap their vines along the rocky edges of smaller atolls, forming patterns not unlike the soft curves made by the waves below. Tall granite and limestone rocks jut out of the water like those at Railay beach that attract climbers from around the world. Apart from the guests at the Myanmar Andaman Resort, we didn't meet a single other tourist during the trip. We see no other footprints in the sand on the uninhabited islands and no other tour boats. The fishing boats we do see are opportunities to supplement our seafood selection on board, trading beer for freshly caught cuttlefish. 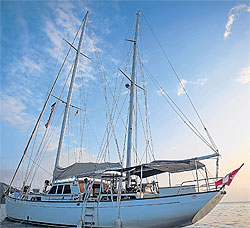 At sunset, it is a seascape painted by a romantic _ peach-coloured candy floss fluffs of clouds, tufts of verdant green islands sticking out of blue water. As the sky darkens, fishing boats in the distance become dark rectangular shadows, silhouetted against the setting orange sun. And by night, the same boats shine bright florescent squid lights, sparkling on the same black canvas as the countless stars above. One night, I witnessed four shooting stars.

It's unclear how long these islands can remain isolated and unspoiled. An Asian Development Bank report states that the year-on-year growth of international visitors to Myanmar last year was at 29.7%. That's almost twice the increase Thailand saw last year at 15.98%. Chelsea Football Club owner and Russian billionaire Roman Abramovich's super yacht was spotted by the Myanmar Andaman Resort staff earlier this year. A long jetty sticks out of another island owned by Tay Za, a famous Myanmar tycoon, though I'm told construction remains unfinished. On many of the islands there is rubbish swept by the ocean currents and washed ashore _ plastic bags and polystyrene, but also a surprising number of sandals.

For now, as we set sail near the end of the trip, I let time pass over me with the breeze and pretend effortlessly the islands are just for us.

HOW TO GET THERE

Recommended cruises and charters to the Mergui Islands (operating from Thailand). 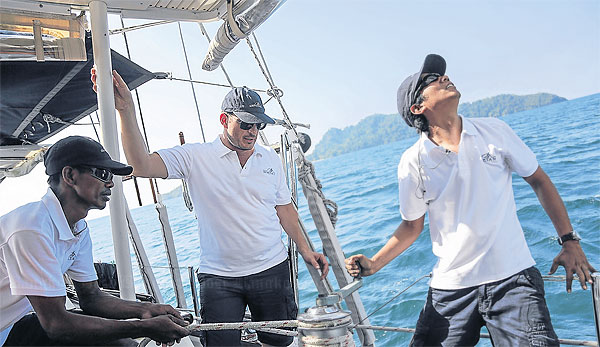 the yacht’s crew unfurl the sails as the wind picks up. 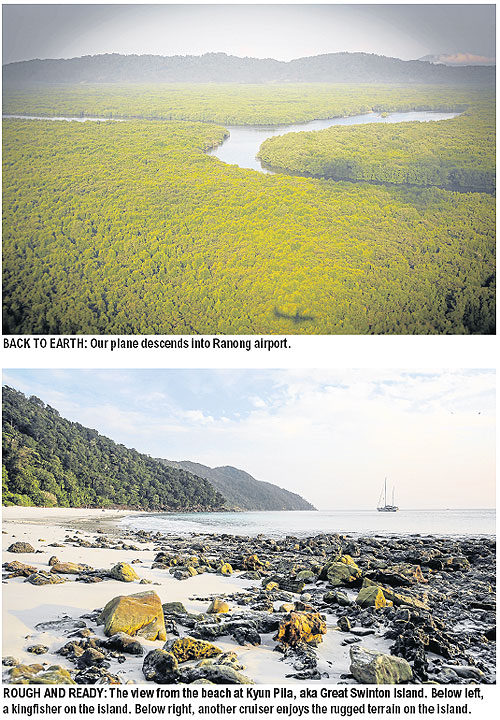 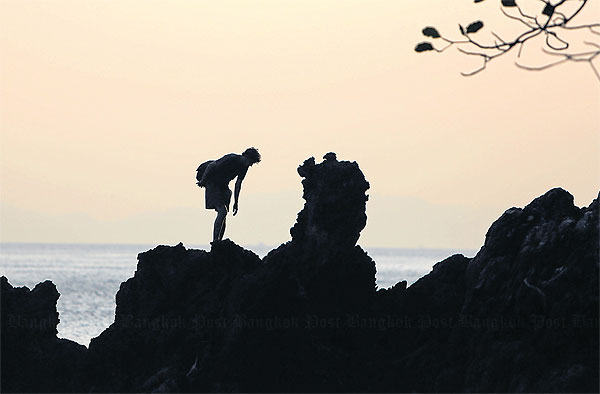 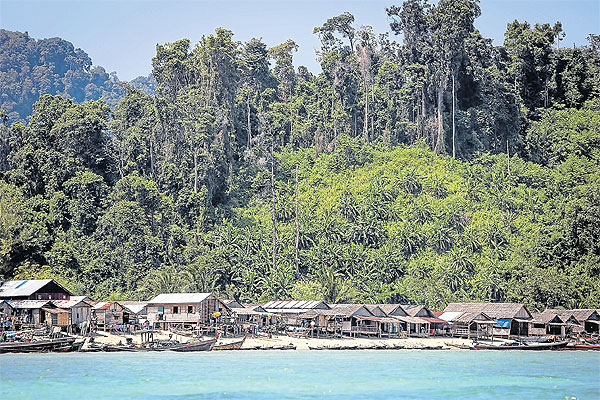 AT HOME: A village on Nyaung Wee island, where 20 of the 80 houses are owned by Moken. 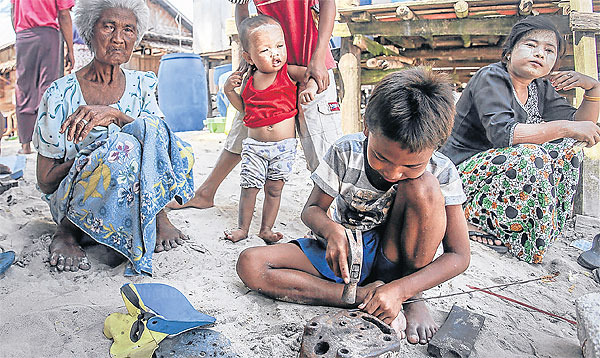 GETTING THE POINT: A Moken boy sharpens the metal tip of his harpoon on Nyaung Wee island. 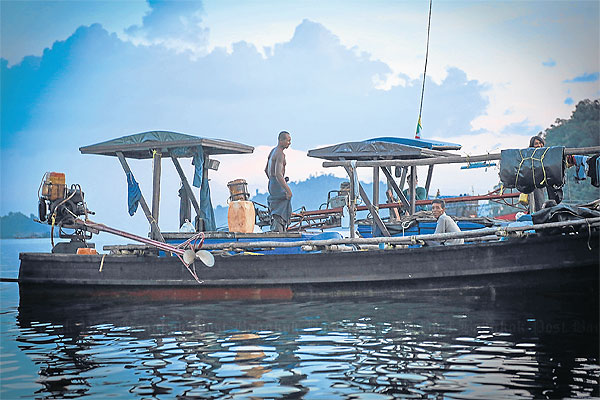 STOP ME AND BUY ONE: A fishing boat we traded with near Myinn Khwar, or Horseshoe island.