Bygone era of bars gone by

The vast and vacant block is covered with patches of grass and foliage and littered with the debris of a lifestyle that is no more. Washington Square, once a haunt of Vietnam veterans, spooks and other colourful characters, has been pulled down in the name of progress. The lively warren of Western-style bars with names such as Texas Lone Star and Silver Dollar, flophouses, massage parlours and food stalls off Sukhumvit Soi 22 has gone, and will no doubt be replaced by venues that are chic and Instagram-friendly.

The development on the site of Washington Square is but one example of the generational change taking place in Bangkok's food and entertainment scene. As the ranks of the mostly American old guard thin out, younger expats are joining tourists and the burgeoning ranks of professional Thais in wine bars and chic cafes. Who knows how long 1960s-era Bangkok hotels such as the Rex, Florida and Miami will survive the wrecking ball? ALL TORN DOWN: The bulldozed area of Washington Square alongside Sukhumvit Road.

Perhaps most symbolic is the fate of the frumpy old Federal Hotel in Sukhumvit Soi 11, which has been purchased by a developer. In the same soi, but 33 storeys higher, is the uber-cool Above Eleven restaurant offering Peruvian-Japanese cuisine with ingredients such as quinoa _ loved by nutritionists but surely anathema to the veterans who want an honest beer and a perhaps less-than-honest flirt.

Maybe this is not a bad thing. Even one of the proprietors in the former Washington Square said it had become ''a rundown geriatric enclave'' by the time it had been demolished.

A few establishments have survived, but in different form. The Bourbon Street Restaurant and Oyster Bar moved to Ekamai, while The Dubliner is now across the street and down another soi off Sukhumvit.

Bourbon Street managing director Douglas Harrison said the termination of the lease actually turned out to be ''a blessing in disguise''.

''Who wants to take a date or their family past a recycling centre just to get to a restaurant?'' he says.

''There was a lot of life in Washington Square, but I was the only one there with a family business in what became a rundown geriatric enclave.''

The change in location has resulted in a shift in demographics. While still attracting Western expats, the Thai clientele has jumped from about a quarter to nearly three-quarters, and there are many other nationalities besides.

''We're like a United Nations. We have just about every nationality coming in to eat,'' Mr Harrison says.

He notes that expats of today are generally more mature than in previous decades, when the visitors sometimes lost their temper with the locals. ''Companies don't send over just anybody like they used to. And today there are many more educated Thais who have studied and travelled abroad.''

There are Washington Square refugees who pine for their old haunts. Freelance English teacher and writer Charles Dickens from Northamptonshire speaks longingly of venues gone by, particularly the Silver Dollar with its lack of pretentiousness and 55 baht draught beers. The customers were typically ''old geezers who went there to meet girls who were also past their sell-by date. Love was in the air.'' 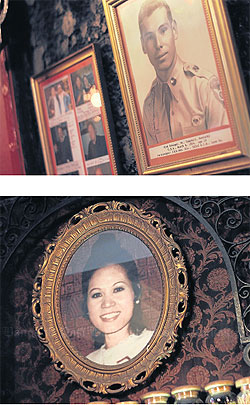 CLASSIC LOOK: Right and below right, The Federal Hotel in Sukhumvit Soi 11.

MOVING ON UP: Below, Bourbon St Restaurant & Oyster Bar in Soi Ekamai.

He likened the typical bar in Washington Square to a village pub back in the UK.

''It was non-threatening. I just liked the fact that you could float in and out of bars. It was free and easy. The old expats felt comfortable there. It was like a society of oddballs. And the girls working in the bars were not pushy.''

Mr Dickens says the clientele was about 90% American expats, with most of the rest Brits, plus a smattering of other Westerners. The transient nature of the square kept bar owners and their patrons ready for the inevitable. ''The guys there always said this place is going to be torn down next week,'' Mr Dickens says.

He admired the quirkiness of the place, with its walls full of Americana and easygoing atmosphere that was a respite from a city of skytrains and giant malls. ''It slowed Bangkok right down.''

The self-described ''caveman'' says he could never be comfortable in the cafes of today's Bangkok where ''the drinking of coffee is incidental''.

''People are there to be seen. I don't think many chaps from the Vietnam days could settle into that scene.''

Dean Barrett's rich descriptions of Washington Square in the 2003 crime novel Skytrain to Murder inspired Mr Dickens to investigate the area, and he even came to enjoy chatting with the author in the Silver Dollar now and then.

Barrett spent time soaking in the atmosphere of the square, and by email explains how he was impressed by the camaraderie between men and women.

''For the price of a lady's drink you could sit with a not especially young Thai lady and she would listen to your (perhaps drunken) spiel, or laugh at your jokes or commiserate with you on how unfairly your boss/wife/life was treating you.

''The women working there had not had easy lives. Many had children and no husband.

''The strongest feeling I have when I think of the square is one of respect _ the respect the men and women had for one another. Elderly ex-military [types] who had fought in wars and tough, hard-bitten men who worked with their calloused hands and women with the experience, tolerance, kindness and patience to deal with them _ drunk or sober, loud or withdrawn, reasonable or demanding. To say the square was unique is not an exaggeration.''

The ornate black door with the coats of arms and shields looks heavier than it is, and opens up from the gaudy seediness of Patpong Soi 1 into a world where time moves differently _ although not necessarily slower.

The Madrid bar and restaurant has evolved since it opened in 1969, then catering mostly to US soldiers fighting in Vietnam and later gaining a reputation for hosting pilots from the CIA's Air America and even as a place where covert operations were planned. 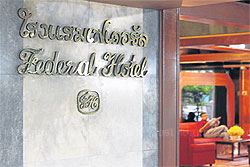 A woman who asked to be identified only as Jenny now runs Madrid; she took over the business from her Thai mother, who helped get the bar up and running with Jenny's American stepfather. The clientele was about 95% American in the old days, including many CIA and DEA agents and US embassy workers.

The most famous regulars were the Air America pilots who conducted clandestine operations against communists in Laos in the 1960s and 1970s. Most have now gone: Many have died, others have stopped drinking out of health concerns, and some have moved upcountry because they find Bangkok too expensive these days.

Pilots are still popular at Madrid, but these days they are the commercial rather than conspiratorial kind. This is helped somewhat by the fact Jenny's husband, Andre, flies for Vietnam Airlines.

''The pilots will come here to drink while the air hostesses go shopping in the night market,'' she explains.

She says on some nights Japanese men with their Thai girlfriends form the majority of customers. And Indians in town to throw lavish weddings at a cheaper price in Bangkok than at home love the vegetarian pizzas. While popular US comfort foods such as chicken fried steak and ham hock with cornbread are served, so too are Chilean mussels.

''I don't think any of the Air America guys would have come here for the seafood,'' Jenny quips.

Reminders of the old days live on through a few photos of US soldiers, and decals for US airlines and a Cobra Gold exercise, plus bumper stickers supporting both sides of the Redskins-Cowboys rivalry.

A larger number of Thais now frequent Madrid, although they typically come at lunchtime _ on weekdays for office workers and weekends for families.

''Thais have this kind of taboo about going to Patpong,'' Jenny says. ''I don't think they'd want their children walking by go-go bars.''

She estimates that today 10-15% of customers are Thais.

Screenwriter Dave Walker, who calls his recent project The Poorest Man ''a Khmer Rouge story with a happy ending'', has been coming to the Madrid regularly since 1981. Of all the changes there, he says it's the people he misses the most.

''It was living history. The conversations here, you couldn't imagine. These guys really lived life.'' 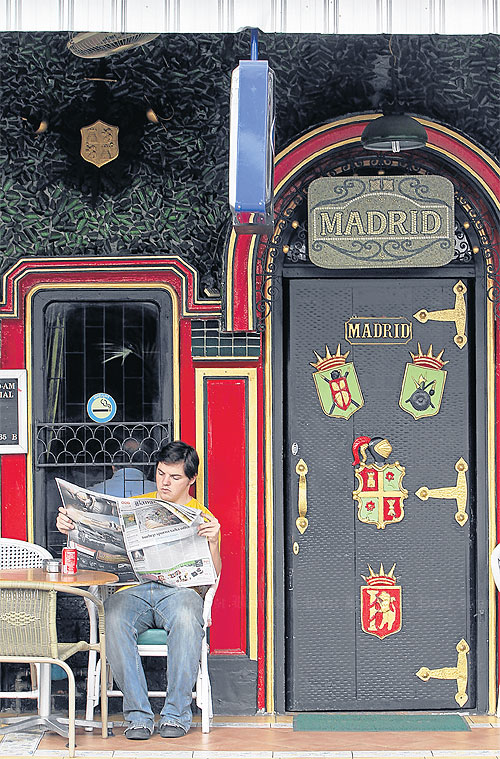 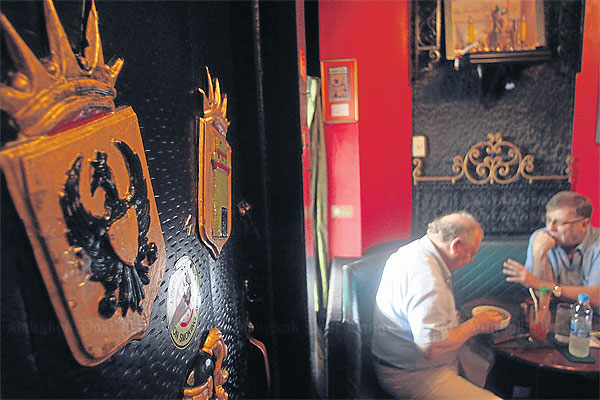 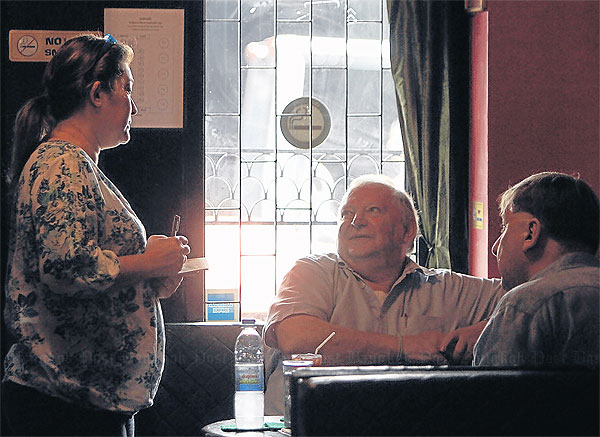 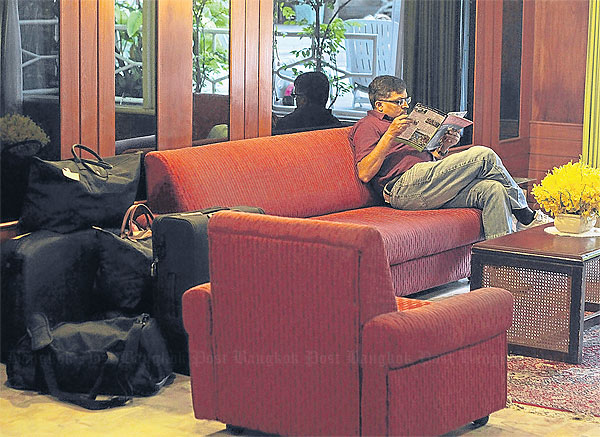