Moulding teachers of the future

'Teach For Thailand is an organisation that seeks people of the new generation who want to create a positive change to education in Thailand," says Pichayut Jirapinyo, head of talent acquisition of Teach For Thailand (TFT). 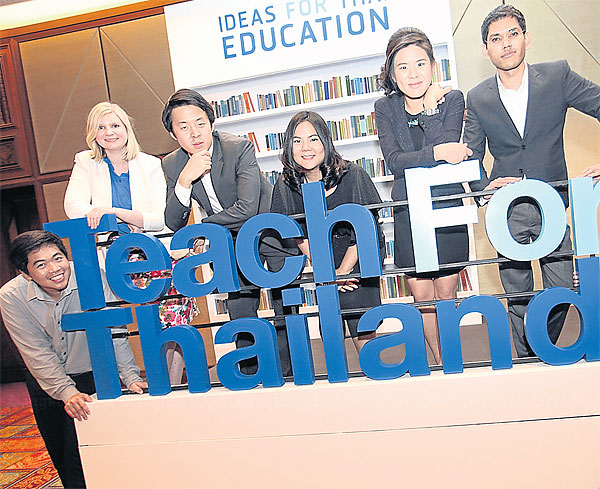 The idea is simple. TFT taps into the idealism of the best, most promising recent graduates who are passionate in social work, not to mention have leadership qualities in various fields, who truly understand social problems and who are willing to work to fix them.

The recruited fellows, Thai citizens or foreigners of Thai origin would become paid teachers in high-needs schools for two years. The programme aims not only to help with expanding education opportunities for students, but also to educate the recruits by equipping them with leadership and communication skills valuable for future endeavours.

Education in Thailand has long been a cause of concern. Thailand ranks 50th out of 65 countries in the Program for International Student Assessment. Research finds 45% of Thai students drop out before completing secondary school. Being a teacher is often equated with low pay and high burdens _ which isn't entirely true. According to the labour survey conducted by the National Statistical Office in 2010, while the starting salary for teachers does begin at the lower end of the scale, the salary gradually increases and does become comparable to those of other professions by the average age of 40.

"Teach For Thailand is here to be a part of the solution," says Vichitapol Pholpoke, founder of TFT.

TFT is part of the Teach For All network, of which 32 nations are a part, from the US and Britain, to Malaysia and India. Each organisation is independent _ each education problem unique to each country _ but follows a similar model and principle of getting young talented people to inspire students in high-needs schools.

TFT is recruiting its first class of 50 teachers who will begin teaching in May next year. During their two-year term, recruits will teach subjects they are most proficient in to students in Mathayom 1-3, which is, according to Vichitapol, "the critical turning point in educational development". Recruits will be supplementing teachers at partner schools, increasing efficiency, not replacing them, and will be paid by the Bangkok Metropolitan Administration, he added.

Vichitapol wanted to participate in Teach For America, which was founded in 1989, after graduating from university in the US several years ago. Instead, he took on the challenge of spearheading the organisation in Thailand.

"In 2011, I went to a Teach For All conference for social entrepreneurs. There were people from Japan, the Philippines, the Middle East, etc. I really saw first-hand the impact this programme had in China and India, which were started in 2007, and in Malaysia, which started three years ago. It really convinced me that this programme could work in a Thai context," he explains.

Through his research, he has discovered that the social perceptions of people greatly impact the performance of students. "The system of education does not strive to unlock the potential of these students. There isn't a real push for the students to achieve something," says Vichitapol.

As teachers, TFT recruits would inspire in the children the importance of education, and get them excited to learn. Pichayut cites the story of a recruit in Malaysia who left a high-paying job to teach maths to 14-year-old children. "She said everyday is a worthwhile challenge for her. The years teaching are formative years for her, as well. The kind of experience you get as a teacher changes you as a person. She now has a three-year-old child and every day, she thinks of how she can give her students the kind of education she wants her own child to get. This is just one example. There are hundreds and thousands of stories like this all over the world," Pichayut says.

To make sure recruits are prepared to lead a typical Thai classroom of up to 50 students, they undergo six-weeks of intensive training and are assigned three mentors, one from the local school, one from TFT and one from the partnering university, which helps in education planning during the the fellowship.

The training programme includes three components. The university partners specialising in education conduct the teaching to equip recruits with theory and practical skills in becoming a good teacher. Secondly, TFT develops a leadership training programme with their partners in the private sector, which now includes PTTEP, SCB, and SCG. Thirdly, and perhaps most importantly: "We want our fellows to be agents of change," Pichayut states. TFT is planning to bring in people from various sectors, social enterprises, charities, and corporations, to start a dialogue through which the fellows can develop and pursue positive changes in the future.

"The supporting private companies are talking to us about partnership programmes, such as allowing someone who has gotten a position within their company to defer the start of their work for two years so they can join TFT. Some companies are considering giving preferential treatment in the process of hiring to TFT participants, such as guaranteeing them a spot in the first round of interviews. The companies believe that they would be able to find in TFT a pool of employees who work for the better good, who work not for the sake of making money, who work hard and are capable. This goes with our philosophy in that we want to create socially-conscious leaders," Pichayut adds.

Vichitapol says that while starting this organisation has been full of hard work and obstacles, he has also encountered many pleasant surprises. "Many people thought it would be really hard to get top, promising undergrads to be a part of the programme, assuming they would follow social conventions. A lot of the undergrads we interacted with are great people with a variety of options ahead of them but they are now considering Teach For Thailand as a valid third option. There is now a way for them to be a real part of the solution."