Urbanisation threatens Chinatown, one of the most well-preserved areas in Bangkok

The sight and sound of construction brings eyesores and promises. Chinatown, one of the Bangkok's oldest neighbourhoods, is undergoing a significant transformation, and for those who make a trip there during the Chinese New Year festival, which begins today, the old-school charm and the signs of progress are dual pulls to the city's famous quarters. 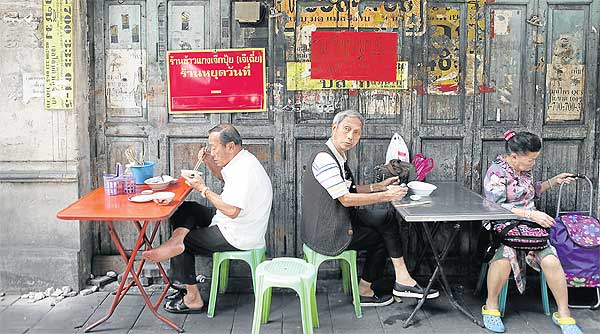 Most buildings in Yaowarat area are over a century old and unchanged by urbanisation.

The expansion of BTS and MRT lines often bring drastic changes to areas surrounding new stations. As soon as a new station is announced, dozens of condominiums and office buildings pop up, along with community malls and department stores. But Chinatown has been extraordinarily immune to such urbanisation.

One clear example is Wat Mangkorn Kamalawat, an iconic Chinese temple  the oldest in the area  which will soon have a subway station located right outside its gate. The station is set to open in 2016 amid traditional shop houses and markets, without a skyscraper in sight.

The Wat Mangkorn MRT station sits on Charoen Krung Road in the Yaowarat area, home to Chinese Thais since the reign of King Rama V. In the past, when high-rise buildings were still foreign to Thailand, Yaowarat Road was the most advanced, with two of Thailand's tallest buildings  seven storeys and nine storeys respectively  located on it.

Yaowarat has retained its authenticity and withstood gentrification  or hypermodern urbanisation  better than other areas in Bangkok. Over the past few decades, even during real estate booms, many of the area's old buildings remain. Its main street has undergone a few changes, but the road in front of Wat Mangkorn Kamalawat, known locally as Wat Leng Noei Yi, remains largely untouched.

But it is feared that might change, ever since a real estate company announced its plans to build a hotel and entertainment complex, equipped with a nightclub and retail space, next door to the temple.

The project, called Station One, is wall-to-wall with the Wat Mangkorn's school building. Its announcement has sparked much controversy and the anger of people in the area. 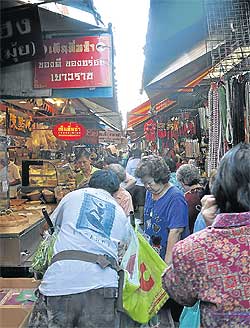 Issaranupap market sells all things Chinese, from food and herbs to worship items.

Prawit, 50, a lucky charms vendor whose stall is right in front of Wat Mangkorn, said many do not want the entertainment complex.

"I have lived in this area for 30 years, and like other people in my community, I respect the temple very much. It is the heart of this area. It is extremely inappropriate to put hotel rooms and a nightclub right above the heads of those who come to pay homage to the gods," he said.

He also said the Yaowarat area is just how he remembers it when he first moved there, with very few changes made over the years.

"Whether the economy is good or bad, people always come here. The traffic is always congested. Most of the businesses here have been here for ages, from generation to generation. An entertainment complex is the last thing we need."

Pissamai, 60, whose former home was on Charoen Krung Road, said she still feels at home when she comes here.

"When my children were still young, we would come to Wat Mangkorn at least once a month, and we would cross to the Issaranupap fresh market on the opposite side to buy food. It has been about 30-40 years, but I have to say it has not changed much,'' she said. "There is still no 7-Eleven on this strip. The shops I visited decades ago are still here. People are still selling the same things  Chinese medicine, food, lucky charms, incense and other traditional Chinese products. When I need something traditional, like auspicious stuff for my daughter's Chinese wedding ceremony, this is where I came. However, I hear less Chinese and more Thai with a Burmese accent being spoken in the market. That's probably the biggest change I can think of.''

Wat Mangkorn and local residents are fighting against the project, arguing that it affects physical and emotional aspects of the temple. Sutee Jintananarumit, a member of the temple's committee, said that since construction began, walls have been cracked, water pipes broken and objects have fallen from the construction site onto people on the sidewalk.

"An order has been issued for construction to stop, but it is still going on. We can hear it every day, and they openly bring materials in and out,'' Sutee said.

Chinatown is a conservation area, which means buildings cannot be altered. Station One aims to build a seven-storey building, but the former structure was only five storeys high. "Renovation is legally allowed, but adding more storeys is not renovation. The old building wasn't built to shoulder that much weight. What if it collapses? This temple is 142 years old, and the name was given by King Rama V. It is too big a risk for something so revered and invaluable,'' Sutee said.

Lawyers Council of Thailand board member Jetsada Anujaree said there are loopholes that might allow the construction to continue.

"The construction clearly violates the rules of the Bangkok Metropolitan Administration, but the Building Control Act allows buildings to be built before permission is granted, provided that the builder must comply and remove the built parts if permission is denied,'' said Jetsada.

"There have been a lot of talks since 2011, but this is a hot potato issue, so it's been tossed around for too long. Station One said it would change the plan and scrap the hotel and nightclub, but that's beside the point, legally speaking. It is clearly written in the law that within a 200m radius of a school or a temple, an inappropriate business is not allowed. This is right next door," he added.

While the issue is still up in the air, residents are actively voicing their concerns by putting up signs. Meanwhile, Station One construction continues, and the sales office remains open. With so many parties involved in the decision  the BMA, the Department of Public Works and Town & Country Planning, the Pomprab Satrupai district office, Station One, the local people and the temple  it is hard to tell how the issue will resolve.

"It is a battle between money and morality," said Sutee. "Let's hope goodness will prevail.'' 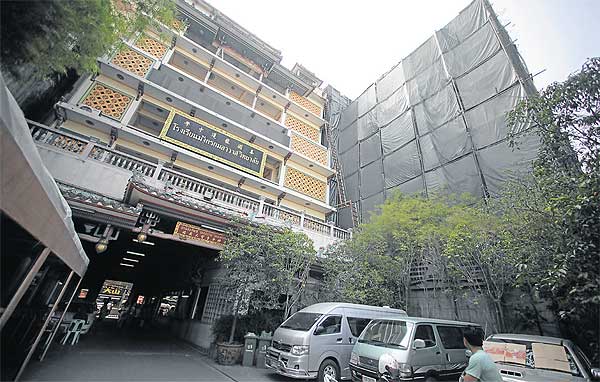 Station One (right) is being constructed right next to the temple’s school building. 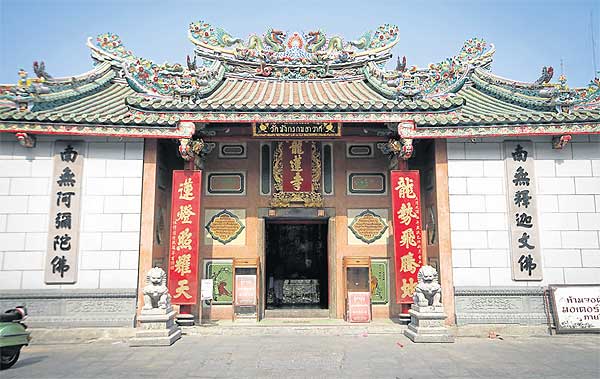 Wat Mangkorn Kamalawat was built in 1871 and named by King Rama V.

'Compared with the people in China, Thai-Chinese put even more emphasis on Chinese New Year," says Mo Yingxiao, a Chinese man who has been living in Thailand for almost 20 years.

Chinese New Year, or the Spring Festival as it's known in China, has a history of more than 4,000 years. It begins on the last day of the lunar year, and ends on the 15th day of the next lunar year, which marks the beginning of the Lantern Festival. Since ancient times, Chinese New Year has been the most important festival of the year for Chinese people  its cultural meaning and social implications are like that of the Songkran festival to Thai people.

Chinese New Year for Thai-Chinese is not only time for family reunions, bidding farewell to the old days and ushering in the new year  it is also marked by the ritual of ancestor worship. Perhaps this is because Thai-Chinese people feel more distant from their ancestral home, thus the rite to remember the past and past relatives has more gravity here than in China itself.

Every Thai-Chinese family has an altar in the home. One day before the Chinese New Year, offerings are prepared early in the morning for the ceremony. All the sacrifices, including sumptuous dishes, desserts and fruits, are displayed on the altar. After all family members have worshiped their ancestors one by one, they eat the blessed sacrifices in the evening  the most important meal of Chinese New Year.

Apart from worshiping ancestors, Thai-Chinese usually go to a Chinese temple to pray for health, safety and success in the coming year. This is different from China, where people often visit their relatives and friends in the morning. In Thailand, however, people do this only after praying in a temple.

There are no public holidays for the Chinese New Year in Thailand, even though most Chinese companies, organisations and schools will hold a celebration and have several days off for the festival. In China, the holiday lasts seven days. This year it begins on Friday.

That's not the luxury of Chinese expats in Thailand. The largest celebration among Chinese people in Bangkok was organised last Friday by the Chinese embassy. The celebration brought together more than 1,500 dignitaries, overseas Chinese and Chinese expats. Another major Chinese organisation, the Hanban Representative Office in Thailand, which is in charge of Chinese volunteer teachers, gathers its teachers once a year before the festival to celebrate the Chinese New Year.

Young Chinese working in Thailand for only a short time usually stick to the festival's basic customs to mark the important occasion.

A Chinese couple who runs a clothes business at Pratunam Market said that because of their work, they have no holiday during Chinese New Year. Instead, they only have dinner on New Year's Eve with their friends.

Dumplings are the traditional food of the New Year. Some Chinese expats, like Liu Juan, who is working in a Chinese school in Bangkok, will make dumplings by herself for New Year's dinner because they are the least expensive and most satisfying dumplings she can find in Bangkok. Liu has also visited Chinatown to buy decorative goods, which she finds very similar to those she has in China.

On New Year's Eve, like many people in China, she will watch the televised Spring Gala Festival on CCTV (China Central Television, official Chinese media) while enjoying the dumplings with friends. The Spring Festival Gala has been held since 1983  the new generation of Chinese have grown up watching it, making it a new custom of Chinese New Year. 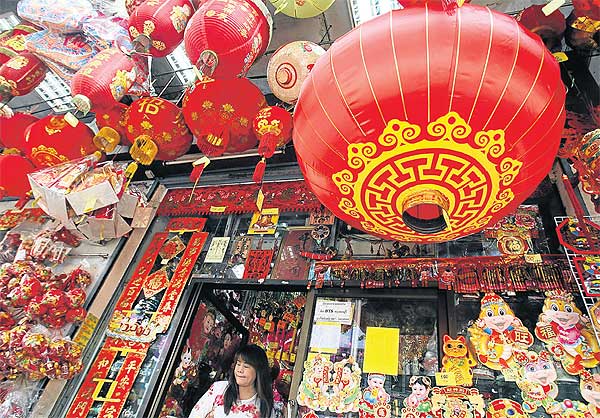