It can't walk and chew gum, but Singapore thinks it can just waltz in and pinch Thailand's famous water festival

This Songkran there is no need to come to Thailand. Singapore is holding it instead. 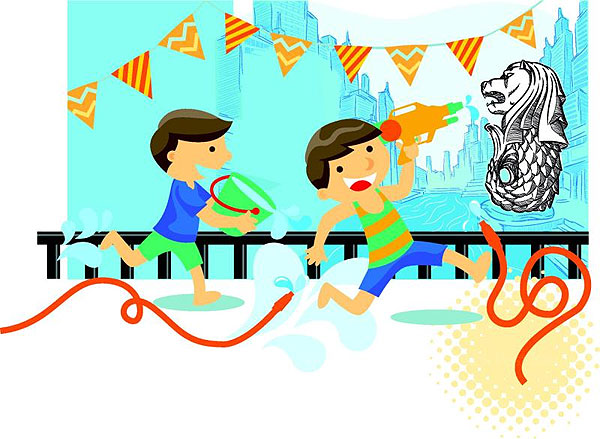 Singapore has announced a two-day event called Celebrate Songkran this coming April 12-13. It’s going to be a gala event with displays of muay Thai, authentic Thai handicrafts and some real-life Thai singers performing such as Film Rattapoom and Four-Mod.

So … why do we hear the sounds of crickets chirping from Thailand?

I recently celebrated 25 years in the Land of Smiles. One would think I would be an expert on the Thai psyche in that time.

Alas no, dear reader. While I am indeed a sage raconteur of Thai life in some of the more shallow aspects, in deeper topics I am as ignorant as the day I stepped off that Thai Airways flight way back in 1989.

This is a fiercely patriotic country, verging on jingoistic if I weren’t such an avid fan of the place. This is a country with a thousand-year-old culture, with highlights like the Songkran New Year festival in April and the delicate Loy Kratong festival later in the year.

Let’s park ourselves outside Songkran for a minute. The New Year itself is not a uniquely Thai thing; a number of countries in this region celebrate the Lunar New Year in mid-April.

Even the water-throwing part is not uniquely Thai. The Lao, Cambodians and Myanmar do it too. Whatever … the point is, only one country calls it “Songkran”. Only one country attracts almost a quarter of a million foreign tourists every April for it. And that is Thailand.

So let’s call a spade a spade, shall we? Singapore has deftly stolen Songkran in one fell swoop.

They could have been a little more diplomatic about it and called it the “Happy Water Festival,” but they didn’t. They popped into our country, grabbed the name SONGKRAN right from under our noses and whipped it down to their island state. In Thailand next month it may be splash splash, but in Singapore, it’s gonna be kaching kaching.

I am trying to imagine a similar scenario back home.

There are few things that stop Australia but one of them is a horse race known as the Melbourne Cup. It is an opportunity for Australians to practise our two national religions — sport and gambling — while the upwardly mobile get to wear hats that would frighten to death any child under the age of two.

I’m telling you now; the Australian military would be put on red alert. The Sydney underworld would be contacting Kim Jong-un for rockets that could be launched from our mainland. Kiwis would be attacked on the streets by packs of marauding Australians. Joe Dolce would be hung, drawn and quartered.

Why hasn’t Thailand reacted like this? Why aren’t the entertainers Film Rattapoom and Four-Mod branded as traitors?

(Perhaps because we must use the word “entertainment” extremely loosely. Film is better known for his philandering than his hits. As for the female duo of Four-Mod, I would strongly recommend putting their Greatest Hits album on a continuous loop on your home stereo system while you go away on vacation as a deterrent to thieves, rodents and cockroaches.)

Am I the only one who remembers the furore that erupted around the turn of the millennium when an American patent was lodged for a rice that had clearly been stolen from Thailand’s jasmine strain? Was it because the thieves back then were Americans, and not our Asian neighbours?

I’m guessing it may have a little to do with the forthcoming Asean Economic Community, due to begin on Dec 31 next year, when the 10 Southeast Asian Nations come together. Singapore is the dynamic leader economically, and for that Thailand has always been deferential.

Not me. I’m not deferring to Singapore. In fact I’ve always eyed Singapore with the utmost suspicion, because in the space of 25 years it has literally flipped its reputation, or rather, traded it with Thailand.

A quarter of a century ago Thailand was the fun-loving country of the region, and Singapore was its dull and dreary rule-obsessed maiden aunt.

Back in the 1970s and ’80s it used to order long-haired Western men to get haircuts before they could enter. When I first visited in 1989, chewing gum was illegal.

Some time after that they discovered the glory of tourism bucks and the island state transformed itself into an Asian Disneyland. A casino this year. A Universal Studios the next. In one year a beach sprang up thanks to tons and tons of Malaysian sand.

If Singapore were a person, nobody would recognise her at her 20th high school reunion. Everybody would be asking what happened to that dowdy little thing who was such a stickler for the rules, and by the way who’s that stunning dolled-up strumpet over there propping up the bar with the huge eyelashes and blonde wig?

In the same time, look what happened to Thailand.

Politically we’re falling into the quagmire of failed-state status. We’ve done everything possible to discourage fun, such as banning the sale of liquor when civilised people are thinking about their first screwdriver for the day. You’re a foreign tourist in Pattaya who wants his first beer at 2.15pm? Sorry. Better pop down to Singapore if you want that.

The Tourism Authority of Thailand claims the Celebrate Songkran festival in Singapore will serve to highlight the festival here but I think they’re just being diplomatic.

Another executive there toyed with the idea of somehow patenting the Songkran and Loy Krathong festivals so that anybody outside the country staging such events could be sued. Yes, you heard that right; Thailand suing for breach of intellectual copyright. How that appeals to me!

What happens if Singapore’s version gets bigger and bigger?

At the beginning of Buddhist Lent, known as Khao Phansa here and usually held around July, the remote northeastern province of Ubon Ratchathani holds a Candle Festival.

Local temples create amazing things out of wax and parade them on the streets. I have been witness to it twice and in the moonlight, the parade of these floats is astonishingly beautiful. There’s only one problem. Ubon Ratchathani is a long way away.

It takes at least seven hours to drive there, and you have to go pass through the province of Nakhon Ratchasima on the way.

Well about 10 years ago another province started up its very own Candle Festival, and it has been growing ever since proportionate to the Ubon one scaling down in size. And which province, pray tell, has launched this waxen offensive?

Why, Nakhon Ratchasima, of course.

These days there’s no need to spend a whole day driving to Ubon when you can just pop on up the highway for two hours and enjoy the same thing at Nakhon Ratchasima. How clever of them, stealing away the tourists with a replica of exactly the same festival but closer to home.

And how clever of Singapore, too, to offer foreign tourists an alternative to the clawing, maniacal political fistfights of Thailand that inevitably erupt in bloodshed and death, and enjoy an age-old Thai tradition in the warm and safe, albeit cosmetically enhanced, bosom of Southeast Asia’s Disneyland. They didn’t get to become the Asean economic powerhouse by sitting still, you know. n