The river of dreams

Sompong Wiengjun sits on a balcony of her house along a dirt road running parallel to the Mun River in Khong Chiam district, Ubon Ratchathani. She sighs while gazing at the foul-smelling river. Twenty years ago, she would have been catching fish and planting vegetables along the river bank. 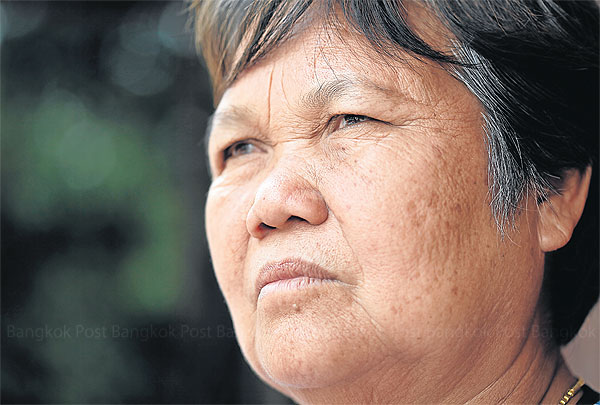 Sompong Wiengjun, a leader of the Pak Mun Dam protesters.

Life would have been simple and sustainable, only if the Pak Mun Dam had never been built.

“The Mun River is vital to our lives,” said Sompong, 64, a protest leader against Pak Mun Dam who has been campaigning through 13 prime ministers and 16 cabinets — and counting. “We want to free our river from the dam.”

Her life and the other tens of thousands living in the 70 villages upstream from Pak Mun Dam have been mired in misery for more than two decades since the dam severely affected their livelihoods.

Pak Mun villagers had earned their living by fishing the river for generations. Sompong grew up by the waterway and learned to fish with her father at a young age. She was 14 when he died, and she became a fisherwoman to help raise her five siblings, who ranged from 12 years old to nine months.

Day after day she learned that vendors at the market cheated her on the scale. That unfairness hurt, and she decided to become a fish vendor with a fair and just scale. She weighed the catch and paid in accurate kilogrammes, and many fishermen sold fish to her, while many customers kept buying from her.

“I opened my shop in the early morning, and was sold out within a couple of hours. I would spend the rest of the day fishing,” she said. Sompong was the family’s breadwinner.

“The Mun River was abundant, and I could send my brothers and sisters to school and support them until they had families. I could buy 80 rai of land and offered 60,000 baht loans a year to people in my village,” she said. Life for her and her four children seemed prosperous.

Until the nightmare began. “Once the first sticks of dynamite exploded to destroy rapids in the Mun River, I felt like dying. The fish were gone, and I have not been able to catch a single one since. It was like my house was robbed and burnt down in one go. I was devastated,” she recalled, as tears welled up in her eyes.

It was 1991. The dam was built 5.5km upstream of the confluence of the Mun and the Mekong rivers by the Electricity Generating Authority of Thailand (Egat). The 6.5 billion baht dam used 700 rai of land on both sides of the Mun River. The dam’s projected target was to produce 136MW per year, but it can only produce 21MW, or just 15% of the target, according to a study by the World Commission on Dams (WCD). And the electricity is not for the locals, but is directed to Khon Kaen province. 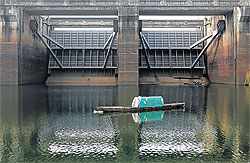 “Egat advertised the dam as a development project, that would bring jobs and water to benefit farmlands in the area. However, a majority of us are fishermen not farmers,” she said.

During the first year of construction, up to 300 locals tried to halt the project. Sompong also led about 60 women and children, including her nephew, to lie down on rocks laden with dynamite to protect the Hua Heo rapids from being blown up. The rapids teemed with freshwater fish and it was a popular fishing spot for the Pak Mun villagers for centuries.

But it was David against Goliath, with the giant too powerful to match. The dam was completed in 1994. It’s since become another monument of tension between economic development and traditional livelihoods. Villagers and activists continued to protest, and Egat pressed charges against them, accusing the protesters of trespassing and inciting chaos.

After 20 years of legal wrangling, the Supreme Court dismissed the case last April. The court’s ruling stated that the river belongs to the public, not to any one person nor one state enterprise. It stated that Egat built a dam that blocked the flow of the river and that altered the ecological system. The dam was built for the purpose of energy, but without proper studies of other impacts, especially to the way of life of the locals. The people have tried many ways to seek solutions by pressuring the governor of Ubon Ratchathani and related ministers, but the problems have never been solved.

The WCD study found that the dam destroyed fish habitats and breeding grounds. The dam also blocked fish migration between the Mekong and Mun rivers for breeding. As a result, fish species drastically declined from 256 to 96. Another study by Ubon Ratchathani University found that the Pak Mun villagers lost a lot of their income as fish disappeared. It found that family earnings dropped eightfold from an average of 25,742 baht a year before the dam construction to 3,045 baht. Meanwhile, family debt increased from 4,926 baht a year to 18,972 baht a year, on average.

Since there was not much work, more villagers, especially young people, moved to find jobs in big cities, including Sompong’s children. The migration rose from 14% to 63%. But Sompong never left.

“My home is here. I have to fight for the return of our Mun River,” she said.

She rose up with other villagers from the initial 300, which quickly expanded to over 10,000 people. They have tried every method from campaigning to life-risking activities. This strong movement against unfair treatment by the authorities played a crucial role in the history of Thailand’s social activism. The Pak Mun protests inspired villagers elsewhere who were hurt by government’s projects to join forces, and they founded the Assembly of the Poor (AOP) in 1995. Sompong was one of the leaders.

The AOP demonstrated at Government House in Bangkok many times in its two-decade-long struggle, commuting from their northeastern village to Bangkok far too many times to count.

The decision to build the dam was made during the Chatchai Chunhavan government's tenure. A major impact it has forced upon the villagers is how the dam blocks the water flow and prevents fish from following their natural path. In 2001, the Thaksin Shinawatra administration agreed to open all eight sluice gates for a year to allow a thorough environmental study. Part of the findings was that Pak Mun villagers could catch more fish and earn three times more than during the years when the gates were closed. At least 129 fish species also returned to the Mun River in that period.

Research has suggested that the government open the sluice gates for five years before making a decision whether to decommission the dam. However, the Thaksin cabinet rejected the advice and decided to open the dam for only four months during the rainy season.

So the AOP returned to Government House. And the more they protested, the bigger alliances they formed.

In 2009, the People’s Movement for a Just Society (P-Move) was established with more than 10 grassroots groups, including members of the AOP, the Four-Region Slums Network, the Northern Farmers Federation, the Northeastern Land Reform Network, the Southern Farmers Federation and the Bantad Mountain Range Land Reform Network. Sompong is also one of the P-Move leaders.

Through all these epic demonstration over the past 23 years, Sompong has been accused of being a communist and had criminal conspiracy charges filed against her. However, nothing can stop her from standing her ground.

Sompong has campaigned against the dam and injustices against her people not only in Thailand, but also in neighbouring countries like Laos, Malaysia and even in Nepal. Sompong was also invited to be a member of the National Reform Committee, chaired by former prime minister Anand Panyarachun in 2010, to find solutions for the poor.

“We have approached 13 prime ministers of 16 governments [including the Yingluck Shinawatra cabinet]. But none of them has shown their sincerity to solve the Pak Mun Dam issue,” Sompong said, adding that now, the protest is focused on pushing the authorities to open the sluice gates.

“No government wants to accept that the project has failed as a development policy, as they are afraid it might impact future dam construction projects.

“It is sad to learn that every government focuses more on investing in mega-projects rather than people.”

From fish vendor to protest leader, Sompong has never been afraid to fight for justice.

“Today, I do not fight for myself, but for the better future of our communities. I also join with other alliances to make our voices stronger,” she said.

When she first stood up against the dam, she was in her early 40s. Now 64, Sompong’s eyes still brim with the fire of hope — despite the series of fruitless fights. One thing is clear — she won’t give up.

“I will fight as for as long as I can. Although it is a big challenge to pressure any government and Egat to open all sluice gates, I’d like to try. One day we will get our river back,” she said. 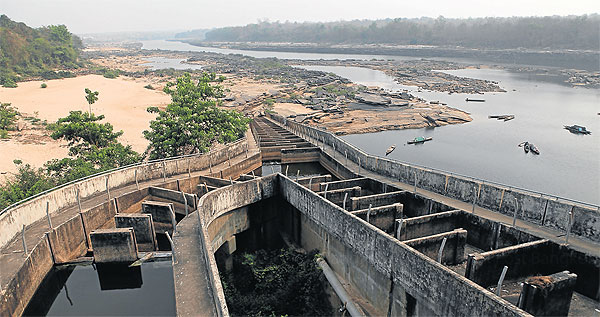 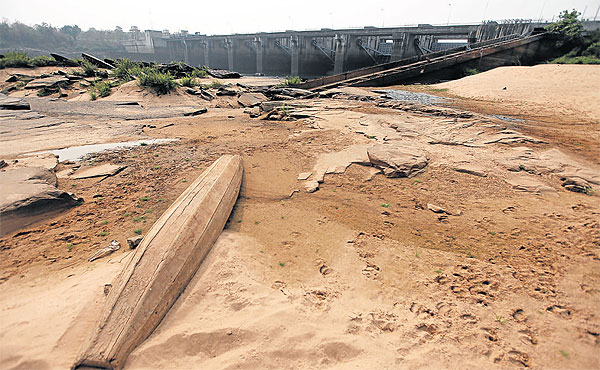 An abandoned boat on the bank of Mun River. 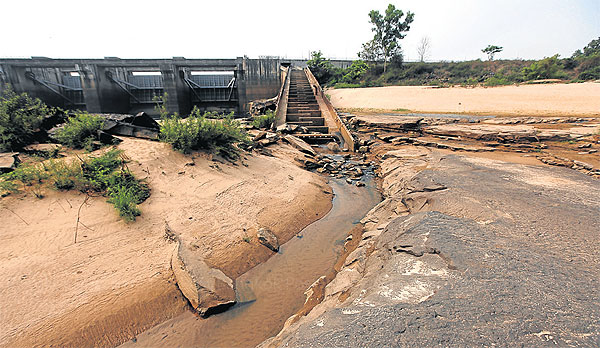 The downstream of Pak Mun Dam.