Apart from the high death tolls, the above statistics have something else in common: all of the accidents took place in Thailand’s hilly areas and involved double-decker buses. 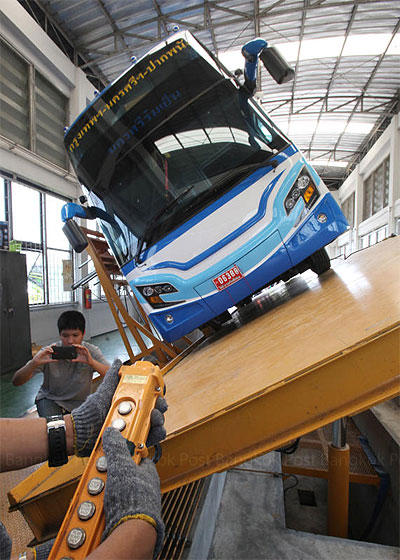 Officials conduct a balance test of a doubledecker bus at a centre in Pathum Thani. Buses higher than 3.6m have to pass a 30-degree slope test.

As the Songkran holidays approach, so too does the anxiety of travelling, as millions take to the roads to get to their hometowns. Many will be going by double-decker bus.

“These buses provide extra seats, and plenty of entertainment facilities, from tables to TVs and karaoke machines,” Asst Prof Thaweesak Taekratok of Naresuan University said as to why he believed that double-decker buses were so popular among tour groups and travel operators.

Despite their “luxury”, academics and those in the travel industry have recently  expressed concern over the combination of locally-manufactured double-decker buses and Thailand’s infrastructure (including the quality of roads). Prof Thaweesak added that the issue was often exasperated by drivers who were not properly trained and who drove beyond the speed limit. Many concerned parties, including researchers from the Thailand Accident Research Centre, are therefore urging the Department of Land Transport to issue proper standards for double-decker buses, as well as barring them on dangerous routes.

“Thailand’s infrastructure wasn’t built to cater for double-decker buses and vice versa,” Prof Thaweesak insisted. Thailand’s intercity roads are too narrow, curvy and steep and most importantly, the buses, which are locally designed, are built only to serve consumers’ demands for luxury and entertainment, and not with regards to any standard of engineering safety.

Sarawut Lerspalungsanti, a researcher at MTEC (National Metal and Materials Technology Center), said that although the garage technicians might be experienced in building buses, they didn’t have much engineering knowledge.

“If any part of the bus is too short, they [garage technicians] make it longer; or any part too long, they simply cut it.” This, Sarawut explains, is unlike bus manufacturing in the West where the bus body is designed by an engineering team and produced in one piece at the factory.

Most double-decker buses in Thailand are, of course, taller than 3.6m - the height of a conventional, single-storey bus. Some are as high as 4.3m, and it is this high centre of gravity that makes them so easy to turn over.

This is why the upper floor of a double-decker bus is often cut off from the main body after an accident, said Nuttapong Boontob, senior researcher at the Thailand Accident Research Centre. As the chassis is typically quite expensive, they are often immediately taken out of wrecks, to be used again.

Bus operators and consumers should share the blame for the high number of accidents, said Sujinda Cherdchai, owner of Cherdchai Tour that operates a bus service and produces made-to-order buses. Sujinda said that her company is currently manufacturing high numbers of double-decker buses to meet the rising market demand.

“Consumers only look for low rental rates, comfort, entertainment and luxury, but forget all about safety,” said Sujinda, who is also the president of the Thai Bus Operators Association.

It’s well known that most double-decker buses currently in service on Thailand’s roads were probably built from used chassis in substandard garages in Ratchaburi’s Ban Pong district. Many of the used chassis come from vehicles that have just had an accident and without having any kind of formal inspection by an engineer.

Sujinda said that, unlike many other bus manufacturing companies in Thailand, her made-to-order double-decker buses were built from brand-new imported chassis from marques like Mercedes, Volvo and Scania. She did, however, refuse to reveal the exact height of her buses and said only that buses from her garage were strictly produced to meet the regulations of the Department of Land Transport. The problem lies within the low number of bus requirements in order to pass tests at the Department of Land Transport.

“If a bus is visually safe, like the doors are in their place and lockable, it’s likely to get the annual license registration renewed,” said Sawanee Chumchalieo, an officer at Foundation for Consumers.

A regulation that does exist requires public buses higher than 3.6m to pass a 30-degree slope test. This regulation, though, only applies to buses registered after Jan 1, 2013. If these newly-registered buses fail the test, they will be unable to renew their annual license and the owners will face up to a 50,000 baht fine.

Prof Thaweesak said that outside of Thailand, the use of double-decker buses is restricted within city areas and they are typically forced to keep to speeds of no more than 65kph. Double-decker buses are rarely seen on any intercity route, and if so only on flat roads, and the speed limit is strictly applied. In Thailand, however, double-decker buses are allowed on almost every route, including the extreme slopes of Kanchanaburi’s Sangkla Buri. Sarawut added that standard practice in Europe deemed all public buses with more than 16 seats have safety belts, which passengers must wear while sat in properly-installed seats placed at 65 to 80cm from each other.

“In Thailand, though, the standard only requires safety belts, but passengers are not required to wear them,” said Sarawut.

It is for these reasons that Sawanee, among others, is urging the Department of Land Transport to issue proper standards, including appropriate heights of double-decker buses, for operators to adhere to as soon as possible.

For the time being, they want the department to ban double-decker buses in routes with steep and/or curvy roads, and strictly inspect the bus body and safety accessories like seatbelts. Currently, double-decker buses are prohibited in very few areas; one is on the route to the top of Doi Suthep, near Chiang Mai. 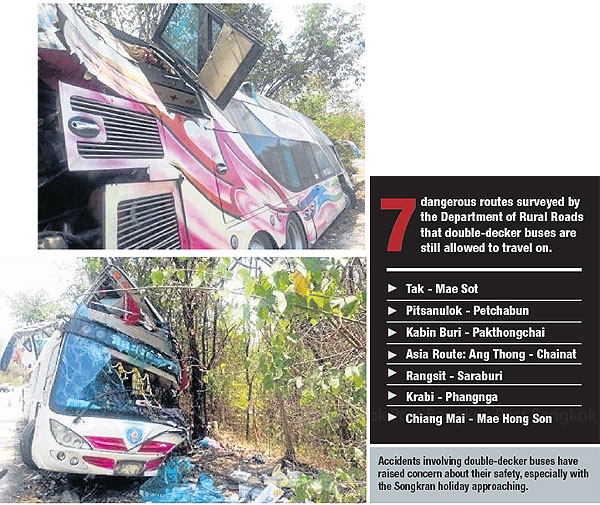