A reader wants to know where he could buy the improved variety of mulberry which was mentioned in Green Fingers two weeks ago. One of the new cultivars found at the recent Kaset Fair at Kasetsart University, this mulberry was certainly more fruitful than the Morus nigra, or black mulberry, that we have on our farm. 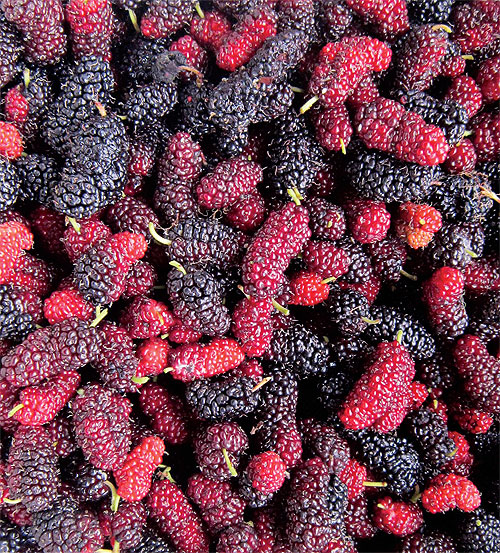 Hot new superfood: White or black or red, mulberries are rich in potassium, manganese and magnesium, as well as Vitamin B-6, niacin, riboflavin and folic acid.

But now that I have had more time to think about it, it could be a different species altogether and not a new hybrid as the plant seller claimed. Hybrids usually display the good qualities of the parent plants: more sturdy plants and bigger or sweeter fruits, for example. But although the plant at the Kaset Fair had more fruits, these were smaller and not necessarily more luscious-looking than the black mulberry, and the plant was spindly.

Mulberry was originally grown in Thailand for sericulture. In silk-weaving areas of the North and Northeast, the leaves of mulberry are harvested and fed to silkworms, which are the caterpillars of silk moths. From the time they hatch, the caterpillars eat the leaves continuously for six weeks, after which they begin to spin cocoons to encapsulate themselves.

They take eight days to finish the cocoons, which are harvested and boiled or steamed to soften them, thus making it possible for the silky fibres to be separated into strands and spun into long threads. Dyed, the threads are used to weave the luxurious fabric famously known as Thai silk.

There are two species of mulberry grown in Thailand: the white mulberry, Morus alba, and the black mulberry, Morus nigra. White mulberry is originally from northern China but naturalised in Thailand, where it is primarily grown for its leaves, which are the preferred food for silkworms. Its fruit is white when unripe then turns to pink or purple when ripe. 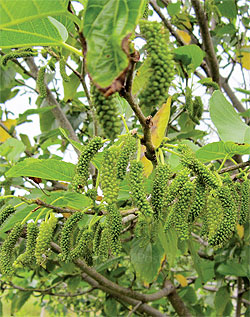 Tonic: ‘Morus alba’, or white mulberry, is cited for its many health benefits.

However, a variety brought back from India by a friend has fruits that start out as dark green then turn yellowish white when they ripen. They taste refreshingly sweet but different from the black mulberry.

In traditional Chinese medicine, the fruit of Morus alba is used as a blood tonic and to treat prematurely grey hair, constipation and diabetes, and the bark is used to treat cough, fever, headache and red eyes.

Korean researchers from Ewha Woman’s University and Seoul National University have found that there are some chemicals in the leaves of white mulberry that work in a similar way to some medicines used for Type 2 diabetes; tea made from the leaves, therefore, can lower blood sugar levels. In India, research showed that leaf extracts can be a potent antidote against snake venom.

White mulberry gained widespread popularity in the US in last September when the famous cardiothoracic surgeon and talk show host Mehmet Oz described it on his syndicated television programme, The Dr Oz Show, as “the hottest new superfood for battling diabetes, cholesterol and even heart disease while helping you lose weight by blocking sugar”. He recommended dried mulberries for their “high level of fibre, protein and antioxidants and ability to inhibit digestion of sugar”, and tea made from leaves for their “potent sugar-blocking properties”.

Native to Iran from where it spread to Turkey, parts of the Middle East and East Asia and probably through the Silk Road to eastern and central China, the black mulberry is a shrub or small tree cultivated for its fruit, which starts out as green then turns to red as it matures and dark purple, almost black, when ripe.

Refreshingly sweet when fully ripe and cited for its laxative and antioxidant properties, the fruit is prescribed in traditional medicine as a blood tonic and as a remedy for kidney disorders, fatigue, anaemia and premature greying of hair. However, as the fruit is perishable and in Thailand production is not big enough to warrant drying, it is not widely available on the local market. If you are lucky, you might chance upon fresh fruit at the Royal Project’s outlets at Kasetsart University and beside the Farmers’ Cooperative Market (Or Tor Kor) at Chatuchak. White or black or red, mulberries are rich in potassium, manganese and magnesium, as well as Vitamin B-6, niacin, riboflavin and folic acid.

Mulberry is a shrub that can grow into a small tree but it is a slow grower so it can be grown in a big container. Whether you are planting the cultivar sold at the recent Kaset Fair, or the white or the black variety, with proper care you can coax your tree to produce bountiful crops even in Bangkok.

Mulberry performs best when planted in well-drained loamy soil mixed with compost or leaf mould and decomposed animal manure or a handful of organic fertiliser pellets. Plant it or place the container in full sun and water regularly until it is fully established, when it can be watered as needed. The tree will benefit from an additional supply of inorganic fertiliser, NPK 16-16-16, or its equivalent.

Saplings sold at Chatuchak and at plant fairs are usually graftings so they start bearing fruit two years after planting. Trees bear fruit all year round but the peak seasons are May-June and October-November. n