After the tragic passing of prominent street artist/illustrator/designer Mamafaka last September, many have worked hard to continue his legacy in honour of his artistic contributions, as well as to bring the scene onto a more mainstream level. We catch up with a trio of young street artists, who have all credited MMFK as their influence, but who're also bursting with colour and a style of their own 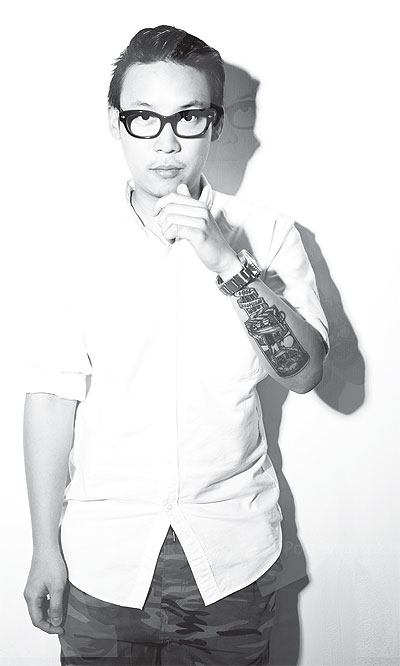 ▶ Benzilla’s diminutive build, fair skin, horn-rimmed glasses and demure manners are a far cry from his highly recognisable signature character, 3Balls. Even if his tattoos don’t seem to toughen his appearance, the quiet exterior reveals the three eyes that are prominent features in 3Balls’ various incarnations. 3Balls are often fierce — borderline psychotic — bold and caustic, created by sure-footed strokes and confident colour manipulations while laced in innocent menace and naughtiness. 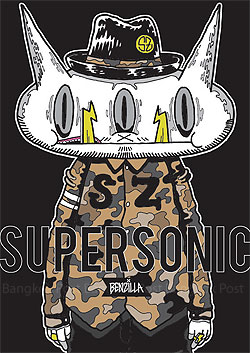 “3Balls came from my love of science fictions and sci-fi movies,” says Benzilla, or Parinya Pichetsiriporn. “I’m crazy about UFO and life forces beyond our world. So 3Balls is an alien who comes from outer space to Earth, and he’s trying to blend in with human beings. He moves with many disguises, trying quite hard not to get caught even if he has three eyes.”

Still uncertain if he could be labelled a pure street artist, Benzilla said he is passionate about its artistic style and philosophy, and his large-scale works could be seen around Rama III and the Hopewell project. He has done a solo exhibition at Art Guerrilla entitled “Devil Candy”. His latest commission is to decorate the entire Adidas Original shop in Chiang Mai, a project which he has recently wrapped up.

Benzilla first became interested in arts through skateboarding and music.

“I was in love with skate brand logos and decks, which led me to graffiti. I’ve always listened to a lot of music from rock to hip hop. Inspired by these two things, I just started drawing out of joy. Then it became very serious and I chose to study graphic design for my university degree,” he said.

Benzilla has dabbled in clothing design with his streetwear brand, which has been put on hold for the moment. He is a full-time graphic designer for an advertising agency, and he said his art is more of a professional hobby that he takes seriously. He said he’s fortunate that he works fast, and can get many things done with the space and time given, but the downside is that he can’t mostly participate in events that feature live or large-scale paintings.

“I’m quite lucky that I don’t get stuck because I get bored easily. I see myself as a duck since I can do many things, and I have many interests too.”

He is hopeful for the Thai street art movement, and thankful for what MMFK has done in pushing it to the forefront, while he’d like to see his creations turn into toys or decorative items.

“I think art changes with times, and it tells stories of certain times. In the Renaissance period, it was about gods and the focus was shifted to kings and glories during the neoclassical period.
I believe that street art also indicates the state of the society,” he said. 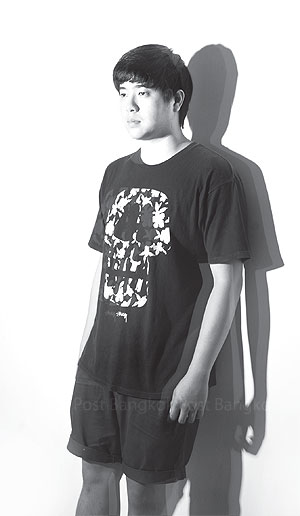 ▶ The youngest of the crop, Nuttaphon Suriyavarakulm, 22, wears humility well. He seems timid and chooses his words carefully. Warhead’s works are fun, young and vibrant with splashes of colour, making them stand out among what’s on the offer in the street art scene.

Warhead works full time at DAMN magazine as an illustrator/graphic designer, and each month he gives readers something to look forward to.

“My editor is God sent. He never poses a limitation of my creativity. I am just lucky. I read the articles given to me and I try to visualise the main idea. I do a lot of research, too so I can have
the details and use them,” he said.

It wasn’t always about arts for Warhead. His family pressured him into choosing science over arts when he was in high school.

“But I always sat in the back of the class drawing. I’m proud that I can now show my folks that you can make a living out of arts, out of doing something you love,” he said.

He opted to study animation at King Mongkut’s University of Technology Thonburi, but never established a connection with the art form.

“It’s too repetitive,” he said. Warhead kept on drawing, and when he first discovered MMFK, he became enamoured and travelled to meet the late artist, whose words of advice Warhead still holds close to his heart.

“My first wall painting experience was in an abandoned building in the Bang Na area. Back then, I could only draw in black and white. Looking back, I was lucky just to finish that piece! I knew nothing. It was a blessing that I got through it.

“I think I’m an illustrator first and foremost, and I also live for street art. It’s relaxation. To create a wall of art takes courage. You need a lot of confidence to go through with it, but at the same time, I am able to unwind when I create large-scale paintings. I don’t know why I feel so relaxed doing it,” he said.

“Almost all young people rely on online media. We can’t live without it. Personally, I don’t use it so much, I guess, but I’ve got some people that appreciate the same things and they follow me. It’s a doorway to the world. It helps spread your work. But it doesn’t mean everything as your internet popularity doesn’t automatically guarantee high quality work.”

An avid toy collector, Warhead hopes to see his works turned into toys in the future. He’s planning to develop more characters and possibly choosing one of them as his signature.

“I haven’t found ‘the one’, you know,” said Warhead. “But this is my one true passion and I will keep on doing it. 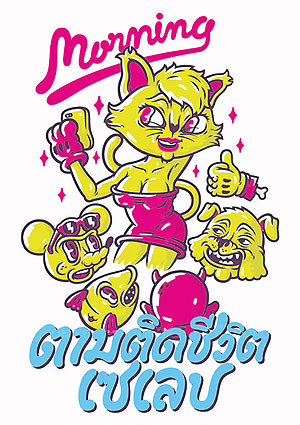 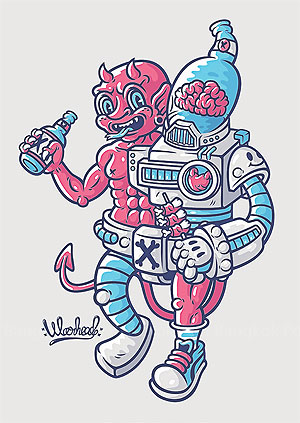 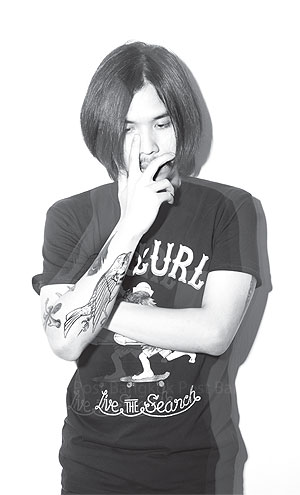 ▶ Inspired by the traditional, prisoner tattoos, Ong’s works concentrate on line movements that seem to flow effortlessly and gracefully onto large walls. The free-form quality seen in his creations is never forced, reflecting his gift and visions. For Ong, or Anapat Kongsagulthaworn, it seems to be all about capturing fleeting moments, turning them into moving, living and breathing art.

“I have no idea what my style is. Initially, I came up with one character, but I got stuck and I couldn’t develop it further. I couldn’t even move on. I stopped drawing for four months, and then I threw away everything except the outlines and the lines,” he said.

Now in his last year as a fine arts student, Ong works part-time on production projects and paints on the side. Ong is one of a few street artists whose names feature regularly in such events and his works can be spotted around town from an Xtreme sports park in Ratchada to deserted buildings. He has also just finished painting the entire wall of a friends’ restaurant.

“I’m not a bombing kind of artist. I also always ask permission to paint on someone else’s property. I just feel more at ease this way,” he said.

In the same fashion of many Thai artists, Ong grew up watching Japanese cartoons and simply started drawing. It might come as a surprise to many, but it has been only over a year since Ong took up street art, and he said he was forever indebted to MMFK for his new artistic direction.

“I was aimlessly drawing on paper and within a confine of frames, but I was lucky enough to get to know MMFK. I asked for his advice and he suggested that I try doing something outside my comfort zone. I actually didn’t think much of it until I was asked to go out to paint the Hopewell project. Without his words echoing in my ears, I would never have gone,” he said.

So Ong went to his first wall painting experience, but it wasn’t impressive.

“I didn’t know what to do. I was flabbergasted. The venue, the scale and the surface. Everything was just so confusing and I was lost. Luckily, there were many artists there.
I just went around, asking them for help and opinions. They were very helpful. That day, I gained more than a finished wall work as I got to know more people and that was the most rewarding. It was a new world for me. I feel like I entered another kingdom that day,” he said.

Even though inspired by tattoos, Ong is averse to designing them for his followers.

“Because they last forever. I don’t want to tie myself with people that long! People ask for my for existing designs though. I don’t mind anyone using them. It’s quite flattering actually.”

Ong’s next target is large-scale sculptures while trying to push his art further, as well as finding new, exciting projects and big walls around town.

“I think Thais are more open and receptive towards street art these days. People actually pay attention to us now. We see a lot of rundown buildings and abandoned space in the city and people actually appreciate the beautification of their community.” 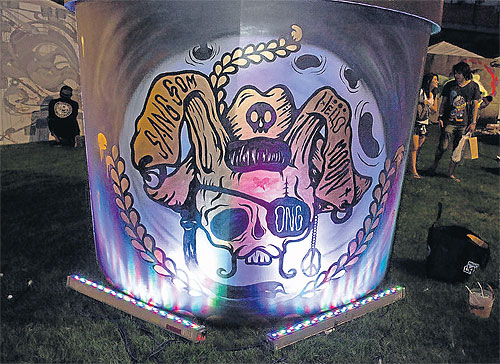 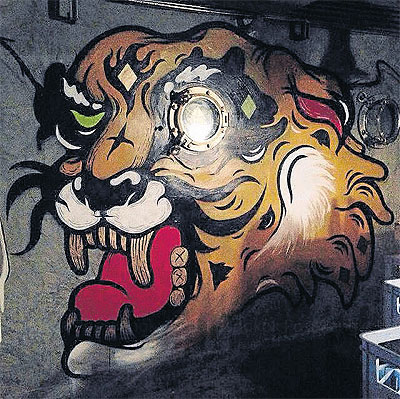