In Thailand, 3 million children live apart from their parents, and as an ongoing study shows, the effects are cause for concern

People from rural areas working as maids or in factories or on construction sites is an ordinary sight to see — a fact so commonly acknowledged that it just blends into everyday society. 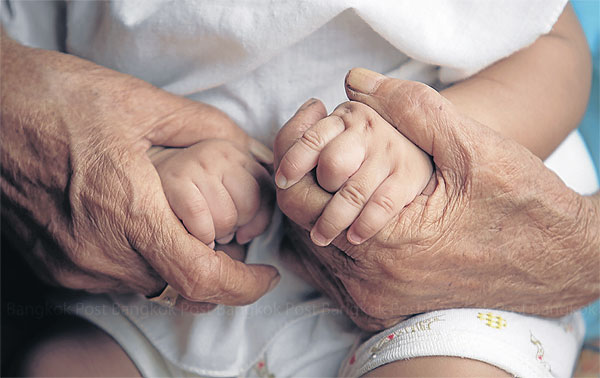 Many have families they leave behind at home, their young children looked after by elderly grandparents. With an entire generation away in another part of the country, this creates a gap in the family. The effects of this gap — of parents being away and not being able to take care of the children themselves — are becoming increasingly concerning.

Piang and Seng Khotchum, who live in Nam Phong district in Khon Kaen province, look after their two grandsons, four-year-old Ohm and seven-month-old Kat. The boys were passed into Piang and Seng’s care by their two sons who are factory workers in Chonburi province.

“I’d never thought I’d have to raise my grandchildren,” said Seng. “I thought that after raising my own sons to manhood, I would be well off and comfortable by now.”

Seng, 53, is suffering from both kidney problems and diabetes. Her husband, 63-year-old Piang, has heart disease and cannot afford an operation. Despite their conditions, Piang still has to mow weeds in a potato plantation to support his wife and the boys. His sons rarely visit and they only send money home occasionally, resulting in the family barely able to make ends meet each month.

As for their grandchildren, little Kat is happy enough at home, though he still cries a few times at night and disrupts everyone’s sleep. Ohm spends his days at a nearby kindergarten. The boy appears quite shy and impatient, not really listening to his grandparents. He was also seen fighting with his friend. It is a tough kind of love out here, and Seng admitted that she had to beat her grandsons sometimes when words failed to make them understand.

“I’m happy with my grandsons,” said Seng. “But I’m also quite stressed out with them.”

Like Piang and Seng, there are many similar cases happening throughout rural Thailand. The treatment the two boys receive is also quite ordinary in that we accept it as a social norm, due to the poor family conditions.

While we have all heard and known about these stories, it is startling that — like Ohm and Kat — there are 3 million children in Thailand who do not get to live under their parents’ care as a result of internal migration. The figure makes up around 21% of the whole nation. Comparatively, however, the figure is only at 5% in neighbouring Laos, according to a survey by the National Statistical Office in 2012.

Supported by Unicef, a four-year study entitled “The Impact Of Internal Migration On Early Childhood Well-being And Development: A Longitudinal And Mixed-Method Study” is being conducted by Mahidol University’s Institute for Population and Social Research to track 1,000 children aged up to three years old in families that are affected by internal migration. The children are tested using Denver II developmental screening, which analyses children’s development in terms of their ability including their motor, language, personal and social skills compared to the standard set for children their age. This includes, for example, the children’s capability to control and use their muscles to grab things around them, and even to smile.

After the initial phase of study, it was found that 25% of children who are living apart from their parents have developmental delays. This is in comparison with 16% of children who live with both parents.

It should be noted that this study does not take into account prenatal and birth conditions, living conditions, nutrition, and other factors that could affect a child’s development. And, after just one year, it is difficult to conclude if internal migration could provide any lasting negative effects on the children’s development. The study should be able to provide clearer answers at its conclusion in 2016.

However, as we understand, most of the parents are away from home in the hopes of making money and sending it back to their waiting sons and daughters in rural areas. In reality, receiving such money has become only a fruitless dream for many families. And even if money is being sent, though useful for purchasing the necessities, it is never enough for much else.

“All [the grandparents] do is feed the children,” said Sumid Sopama, acting chief of Early Childhood Centre, a local kindergarten of Ban Nong Ao in Nam Phong District. “But for toys or books that they may find in the market — all the good stuff that could help stimulate development for their grandchildren — there is not a lot of it. Even if there is money sent to them, they will try to be frugal. They will not buy these things. They save the money for their time of need.”

Sumid has seen all too well how the children’s lives play out in a day. He and other teachers at the centre are the ones looking after local children when their caretakers drop them off. From his observation, Sumid reported that children who do not live with their parents can be quite problematic. They show more aggression compared to their classmates. They play more aggressively, say vulgar words, and have trouble accepting their friends. Sumid speculates that such behaviour is learned at home.

“The grandparents just want to get each day over and done with. Once they’ve done their part, they bring the kids here and rely on the childhood centre to take care of the rest.”

Weary grandparents may not have enough time or energy to properly look after the children. After all, many of them still have to work hard just to put food on the table. So, stemming from the lack of adequate care, there are also rising concerns regarding the children’s future beyond their development.

“We have some drug problems among youths,” said Thongchai Pokum, village chief of Ban Nong Ao, Nam Phong district. “But it’s a good thing that, in our rural society, we can look out for each other. Everyone is not too far away. Even though the parents aren’t around, the family can still give them advice and guidance.”

Despite saying that, Thongchai also admitted that the children in some neighbourhoods are still affected by drugs. Some are reportedly getting drugs from their friends. In the end, there are not enough eyes and ears to watch over the children. And many students drop out before reaching high school.

Another problem, said Thongchai, is teen pregnancy. The issue is complicating the whole ordeal by making young girls quit their study. With no proper education, they don’t have much choice in the types of jobs they can do. As a result, many end up as labourers in other cities, thus creating an endless cycle of children and parents living apart from one another. These children, and the generations that follow, could be subjected to the same living conditions and future in a pattern that they cannot break away from.

If children are truly our future, then the fate of these 3 million in Thailand are at stake. It is a problem that is slowly, in the background, jeopardising the nation.

For video of this story, visit www.bangkokpost.com/multimedia 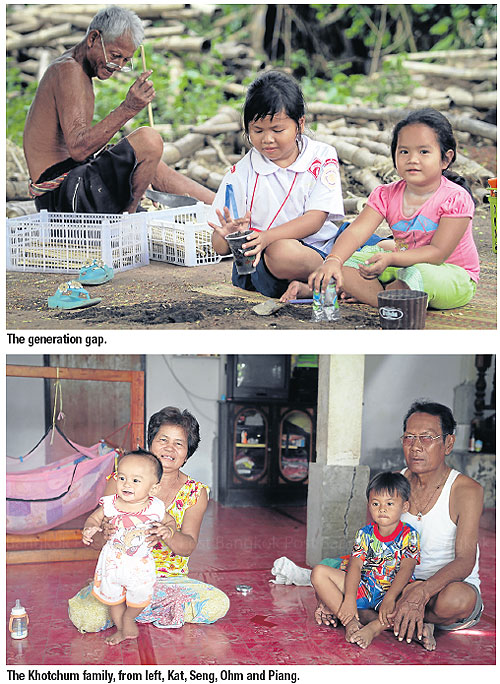