In 1918, as World War I drew to a close, an epidemic of Spanish flu took the lives of between 50 and 100 million people around the world. Every year physicians worry that a new strain of influenza will be as virulent as the Spanish flu.

The World Health Organization (WHO) has repeatedly expressed concern for the lack of global preparedness for such an event. Given its climate, ecology, and urban population, Southeast Asia could become the epicentre for this next pandemic.

To fight this potential threat, the Rockefeller Foundation's Disease Surveillance Network (DSN) initiative, which was approved in 2007, has supported the Mekong Basin Disease Surveillance (MBDS) Network of the ministries of health of six countries sharing the Mekong River (Thailand, Cambodia, the provinces of Yunnan and Guangxi of China, Laos, Myanmar and Vietnam).

The MBDS Network Training to develop the necessary human resources in Thailand and other countries in the Mekong region has proven to be a critical component of the project. In many ways, this initiative builds upon the efforts of the University Development Program launched decades earlier by helping to strengthen Thailand's capacity to perceive and respond to public health threats.

Already, the MBDS Network has helped shape the response to outbreaks of avian influenza, dengue and cholera in the region. By successfully integrating the work of local and national health officials across national borders, the project promotes a strategic response to disease outbreaks.

DSN encourages the development of sub-regional networks of countries and disease specialists to enhance surveillance of and response to national, regional and global outbreaks of disease that have particularly dire consequences for the world's poorest populations.

These efforts were prompted by the appearance of new infectious diseases — HIV/Aids, Ebola, Sars, avian influenza and H1N1 influenza (Swine Flu) — that could cause pandemics. DSN employs a multi-pronged approach to its mission. One is to increase individual and institutional capacity to detect outbreaks of new diseases and enhance the ability to respond to them. Another is to improve the connections among disease surveillance networks.

With the encouragement of DSN, the Mekong Basin Disease Surveillance network, headquartered in Bangkok, has served as a model for the development of such networks in Eastern and Southern Africa. The DSN has also encouraged increased collaboration among specialists in animal health, human health and environmental health in the "One Health" initiative.

According to the National Center for Emerging and Zoonotic Infectious Disease at the Centers for Disease Control and Prevention, approximately 75% of recently emerging infectious diseases affecting humans are diseases of animal origin; approximately 60% of all human pathogens are zoonotic. These zoonotic diseases — Ebola, West Nile, H1N1 and HIV/Aids — have an impact on public health, food supplies, the livelihood of the poor and the environment.

To cope with pandemic diseases, it is essential that they be identified quickly and confined in the best way possible to a particular locality. Establishing surveillance networks has proved difficult because of the fragility of health systems, poor mechanisms for responding to outbreaks, and unreliable coordination.

Still, there are local initiatives that contribute to the larger objectives of the DSN. Thailand and Laos, for example, have established a cross-border site between Savannakhet in Laos and Mukdahan in Thailand.

Representatives of district and public health offices regularly share information through emails, websites, conferences and personal communication (especially during outbreaks) about 18 diseases of concern to the region. This effort has involved the co-operation of doctors, public health officials, and animal specialists.

In building on the work of the MBDS, the Foundation had two major goals. First, it set out to strengthen the network already in place that included Thailand, Cambodia, Laos, Myanmar, Vietnam and China's Yunnan Province. Second, Rockefeller officials plan to make successful practices originated in the Mekong basin available to nascent networks elsewhere, through its support of the global network Connecting Organizations for Regional Disease Surveillance. The objective is to encourage closer collaboration, knowledge transfer and sharing of best practices among surveillance networks across the world — the Mekong region, Eastern and Southern Africa, South Asia, the Middle East and Eastern Europe.

Achieving these two goals will contribute to fostering greater resilience in the face of challenges confronted by communities in Thailand and its neighbours in the Southeast Asia region.

As in its work with the Asian Cities Climate Change Resilience Network and Transforming Health Systems, the Foundation looks upon the surveillance network developed in the Mekong in terms of a "system", a holistic entity.

DSN is providing support to improve the training of those working on surveillance; to enhance collaboration and trust among countries in the network; and to improve the coordination of efforts across borders. Fine tuning procedures for quickly determining the presence and seriousness of a pandemic disease can help ensure that information is quickly made available to others in the network. 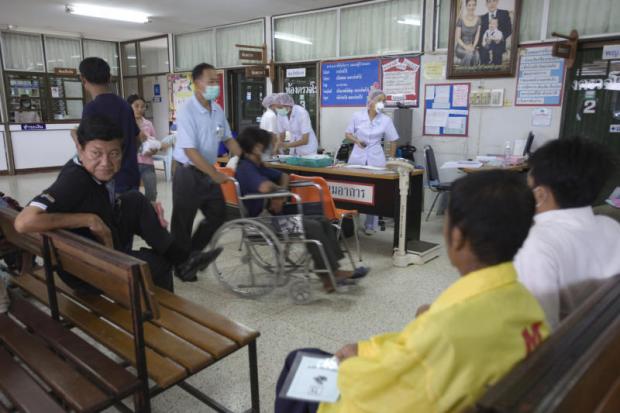 A typical hospital in northern Thailand. 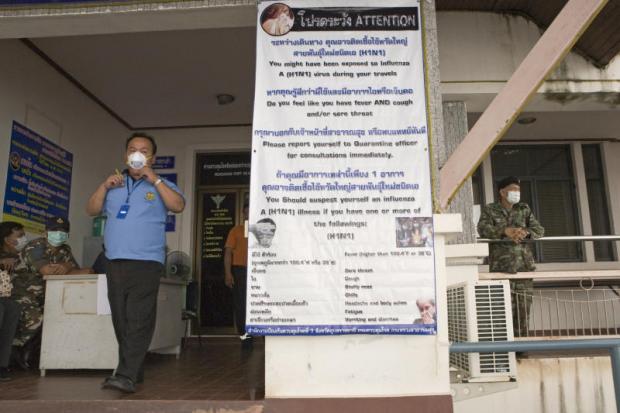 A medical check office at the border with Laos.