Something for everyone
Life
Social & Lifestyle

When Prof Worsak Kanok-Nukulchai was recently appointed the president of the prestigious Asian Institute of Technology (AIT), he brought a long list of firsts to the position.

The award-winning structural engineer and author of several works on computational mechanics is the first former student of AIT to hold the position and also the first Thai to have taken the helm of this non-profit, independent technology institute. 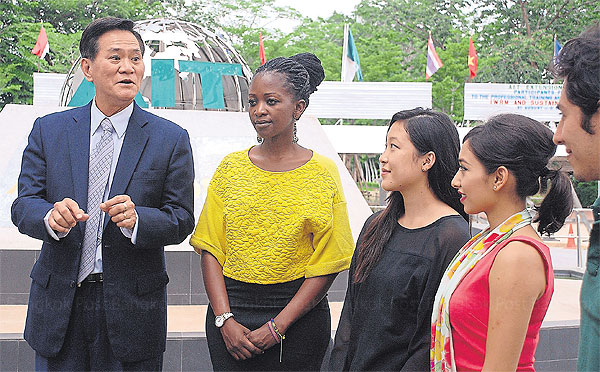 AIT's aim, since being founded in 1959, has remained consistent: to promote technological change and sustainable development in the Asia-Pacific region, through higher education, research and outreach.

The institute dedicates itself to educating its students to become well-rounded individuals, excelling both socially and academically and Prof Worsak is a living testament to this.

From a middle-class Chinese family, Prof Worsak knew early on that he would need to excel at academics if he was to follow his dreams. His excellent 4.0 GPA earned him the scholarships he required to study at top-notch universities and the rest is history.

With an almost tangible sense of pride, Prof Worsak says that it was while he was studying at AIT to complete his master's degree in structural engineering that he built his personality, character and ability to work confidently in a multi-cultural environment.

After earning his PhD in structural engineering and mechanics from the University of California, Berkeley in 1978 as a Fulbright scholar, Prof Worsak began his teaching career at AIT, which is where he has remained until today.

Prof Worsak said studying at AIT was a turning point of his life. He was a 22-year-old scholar on his own for the first time in his life and studying with students from the four corners of the world. In retrospect, he said, it was an experience he would not have traded for the world. His professors were experts in their individual fields and his classmates came from a range of diverse cultures and traditions. During his studies and residency at AIT's campus, Prof Worsak made numerous long-lasting friendships and more importantly, developed as a student.

"I can honestly tell you that I learned how to think at AIT," said Prof Worsak.

"Our professors taught us how to search for new knowledge, how to understand and to question how and why, not just memorise formulas. What was taught to me here benefited me greatly when I pursed my doctorate degree in the US. Being at AIT taught me that it is good to ask questions, not just in order to become more confident, but also for the benefit of other students."

Prof Worsak, who served as interim president last year, has taken the helm of AIT at a critical juncture of the institute's history. He has managed to steady the boat by instilling financial stability through strong cost-saving measures, addressed transparency issues constructively and used lessons learned from past mistakes to improve overall staff performance. All of which, he believes, will lead to a bright future for the students.

Two years ago, AIT implemented a new charter, replaced its constitution and its former board of trustees and unfortunately, in the process, rendered AIT student degrees invalid in Thailand, because the new charter had not been ratified by the government, at the time.

In December 2012, issues were eventually ironed out though, after members of the Board of Trustees under the Charter B.E. 2510 (1967) decided to resume its function at the request of Thailand's Ministry of Foreign Affairs. The legal status of AIT was thus reinstated and today its degrees are now fully accredited in Thailand and around the world.

The academic said past glitches in management had proved beyond doubt that AIT had to respect the laws of the land in order to keep operating successfully.

As for the upcoming Asean Economic Community (AEC) next year, Prof Worsak said AIT would be closely following the Asean Charter, launched in 2007, which states the need for closer cooperation in education and human resource development to empower people and strengthen the community.

AIT was set up by the Southeast Asia Treaty Organisation (Seato) and their mission was to develop highly qualified and committed professionals who would play a leading role in the sustainable development of the region and its integration into the global economy.

The institute's 55 years of successfully building top-notch students from across the world has prepared it to play a pivotal role in supporting human resource development for AEC, as well as in networking with other regions and the world.

"The three goals of AIT for the upcoming AEC are to produce graduates of an international quality for AEC who are well-equipped with professional skills, language skills and inter-cultural skills. Secondly, to serve as a non-political neutral platform for Asean scholars to work and mentor one another and to co-operate on common solutions covering regional cross-border and transnational issues. The final goal is to serve as a nexus for networking AEC with other academic and research institutions around the world.

"With AEC on the horizon, AIT's role will be more focused, but the core mission remains. Entrepreneurship and human achievements will go hand in hand with trans-boundary regional issues like energy, food and water security; eradicating poverty; better governance and sustainability. Asean is a place where maximum growth is taking place in higher education, and AIT is lucky to be positioned right at the heart of the region. As AEC blooms, it is our strong belief and aspiration that so will AIT," said Prof Worsak.

Similarly the Loom Nam Khong Pijai Scholarships in honour of HRH Princess Maha Chakri Sirindhorn also require a GPA of 3.5 and above.

AIT is also the top destination in Thailand for recipients of scholarships from international donors. For example, the Norwegian Ministry of Foreign Affairs has granted 120 scholarships over a three-year period for students from Myanmar, Japan, Germany, Korea and Indonesia.

To further help students, AIT offers fellowships that cover part of the tuition fee. The tuition waiver is directly dependent on the GPA score of the qualifying student.

"There is something for everybody at AIT," said Prof Worsak, "So give it a shot."