Following the government's decision to make long-awaited rice payments to some of the farmers affected by the previous administration's failed rice-pledging scheme, the topic of the domestic rice market has once again become a hot-topic. 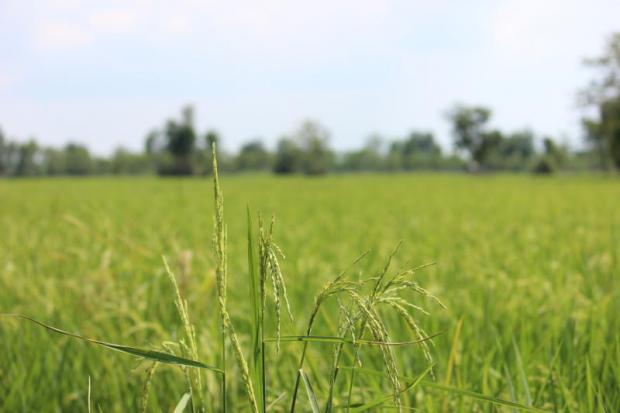 A field of rice is a work resulting from a dedication of farmers or, as Thai saying goes, the nation's backbone.

Although the Gen Prayut Chan-o-cha government may be doing what it believes to be beneficial to an industry often referred to as the backbone of the country, there are others throughout the Kingdom that are also doing their bit in returning happiness to Thailand's farms and cities.

The latest project, called "Pook Pinto Kao" (meaning "tying together the rice tiffin"), is a civic initiative to reduce the huge influence of the middleman and to a system that has long put farmers at a disadvantage. Volunteers from various professions have devised a scheme with the aim of shortening the chain of supply and demand — rice growers and rice consumers — through the concept of  "brides and grooms".

Rice consumers and buyers that join the programme automatically become brides. They are then matched with an existing groom — farmers who operate organic farms. The bride and groom then establish the terms of the contract for the selling and buying of the rice, without the help of any middleman. Pook Pinto Kao merely acts as liaison between the two parties.

This is just one of other similar projects that currently exist to support Thai farmers, as well as promote organic, non-chemical rice farming (see box). 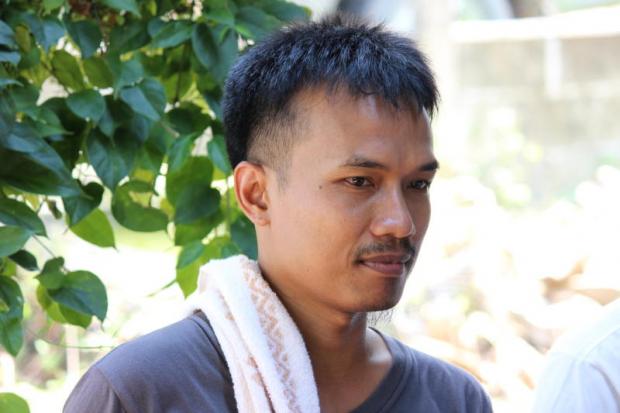 Last month in Chachoengsao province, groom Nakorn Kumpa welcomed a group of visitors from Pook Pinto Kao to his house and treated them with a veritable feast that including his prized riceberry: a brownish purple rice crossbred with black aromatic rice and white jasmine rice. Each grain was harvested from Nakorn's own organic rice farm.

"When you plant the rice with the sole purpose of eating it yourself, you obviously want only good things without any bad chemicals. So, I decided to farm organic right from the start. I didn't study [agriculture], but I knew I wanted my rice to be free of chemicals. Never mind the insects, I'll reap whatever's left," said the farmer.

Nakorn is a man who follows the Buddhist principle of dhamma. Contrary to the surrounding farms that use chemicals, he said the use of insecticides and pesticides and the idea of killing living creatures have no place in his fields.

"My [Buddhist] beliefs happen to match the principle of organic farming that you don't need to use pesticides and fertilisers. We don't have to kill insects. We can just share the rice with them. If birds swoop down to eat my rice, I'm not going to chase them away. Things will take care of themselves within the ecosystem," said Nakorn.

The farmer said that despite other farmers in his neighbourhood still following the old, chemical-heavy technique, he is aware that many of those same farmers get sick after spraying insecticides, and it also didn't seem to lessen the number of unwanted creatures on their land. Growth hormones, pesticides and chemicals are often used in boosting the speed and colour of the rice and in the end, Nakorn said, the toxins seep into the rice grain and then into consumers' bodies. 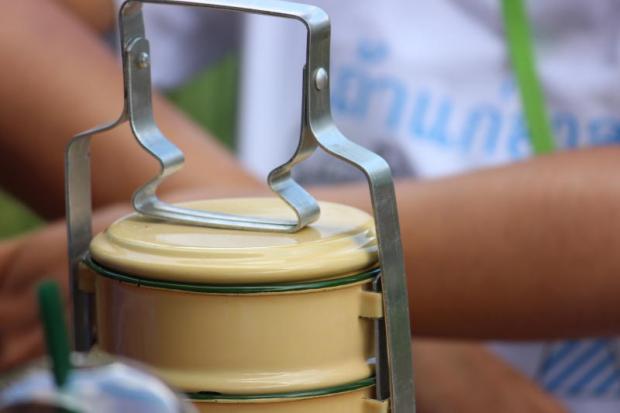 Pinto, or tiffin, is a classic rice box for Thai people, and it also serves as an inspiration for the group's name.

Nakorn pointed out another difference between his organic farm and other chemical farms when showing us around. There were algae and fish in the water, dragonflies perched on rice shoots and birds flying in the distance. Everything just seems a little more natural compared to the perfectly still, greenish field nearby.

Pook Pinto Kao currently has over 20 grooms — individuals as well as groups of farmers. Interestingly, Pook Pinto Kao only accepts organic farmers as grooms and thus is not able to solve problems suffered by the majority of Thai farmers.

In this way, therefore, Nakorn believes the project is not only a great initiative to remove the middleman and prevent farmers from being taken advantage of, but also promote organic farming. 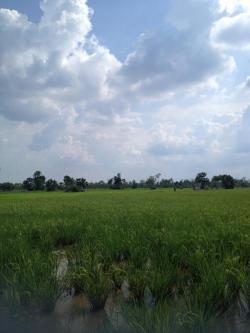 This change in attitude has also had a knock-on effect on rice consumers living in the city. Varrindar Sirarojnakul signed up as a bride of Pook Pinto Kao via its Facebook page as one of the early birds. She orders around 5kg of rice monthly from her groom on a prepaid yearly contract. Varrindar receives a fresh bag of organic rice each month and the money goes directly to the farmer.

"We all do what we can to help those in need," said Varrindar, "Everyone can lend a hand, either as a bride or a volunteer."

When the opportunity presented itself, therefore, Varrindar had no hesitation in joining the group and becoming a volunteer. Her main duty is to visit rice farmers in order to evaluate them before they can be officially listed as grooms.

"I have been really impressed with all the farmers I've met, as well as those I've yet to meet. I really admire them for converting to organic farming. It's very difficult at the beginning. They have to battle with the earth, water and air and aside from learning to live with nature, there is no set solution to a single problem. It really takes a lot before we get a single grain of rice on our plate," said Varrindar.

Starting with just 13 members, there are around 70 volunteers currently working to connect prospective brides and grooms. Chantana Chaowichitra, one of the founding matchmakers, recalled that the idea for the project was born from a desire to help suffering farmers after the previous government's failed rice projects and political situation.

"We are not doing this just to create markets and outlets for farmers. We view this concept — uniting the hearts and lives of farmers and city residents through rice — as something can build a long-lasting relationship between rural and urban communities," said Chantana who added that the success of the project had already surpassed the group's original expectation of the two parties merely conversing with one another for the sole purpose of inking a contract.

Many brides now pay regular visits to their matched groom. In return, many grooms invite their brides over to take part in sowing and harvesting rice or even just for meals. Some of the brides even meet each other, which then creates a network that converts strangers to good friends. Grooms also discuss farming techniques and exchange rice seeds. Many of the relationships, as the name suggests, end up becoming much like that of an extended family. 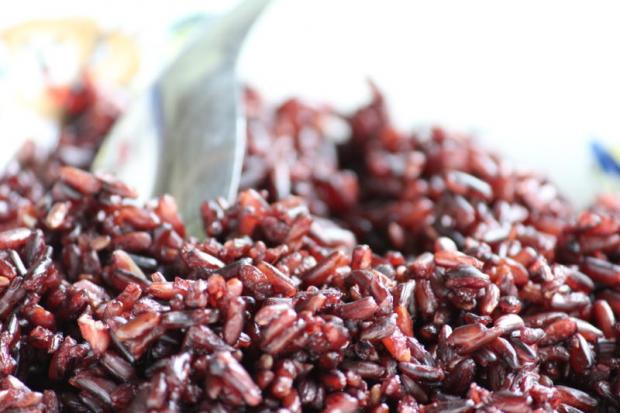 "It is a beautiful relationship," commented Chantana, "And farmers are proud that people are able to recognise and witness their efforts.

"I think this is a good chance to wake Thai people up and make them realise how good of an opportunity this is. People can just change the place they buy rice — from supermarkets and malls — and directly buy from producers. This way they'll get freshly milled rice every month while also supporting those who need it."

To increase the numbers of brides and thus support more farmers, Pook Pinto Kao has recently introduced the "tie the tiffin" project at a corporate level, with schools, hotels, hospitals, food manufacturing companies, factories and restaurants. There are currently over 2,500 brides — individual, group and corporate — and approximately 25,000kg of rice that pass through the programme each month.

"When I go shopping these days, I see colourful fruits and vegetables and I know that the majority of them have been harvested using chemicals," said Chantana

"But at least I get to choose rice that have been produced from farms that I've seen with my own eyes. I may not be able to choose much else, but considering this is something I can, I do."

Find out more about Pook Pinto Kao at pookpintokao.com.

Other groups and programmes that ARE also helping Thai Farmers:

A programme run by TV Burabha allows consumers to order rice directly from farmers on a yearly, prepaid basis. Rice will then be sent to consumers each month.

By paying yearly membership fees, consumers get freshly-milled rice monthly. The money paid is then used as funding for farmers so that they don’t incur debts by borrowing from loan sharks.

Supporting a network of organic rice farms in Yasothon province by applying for rice membership. Consumers get 100kg of rice per year at the price of 100 baht per kilo (10,000 baht in total). Rice is delivered every two months.