Coconut oil, the hype is not healthy
Life
Social & Lifestyle

Coconut oil, the hype is not healthy

It is apparently the latest wonder food, but medical evidence does not back up the wild claims

The popularity of coconut oil continues to increase among health-conscious Thais who have retained faith in its supposed ability to lower cholesterol and blood sugar levels as well as help people lose weight.

The latest claims that coconut oil, also known as copra oil, can alleviate Alzheimer's disease and diminish signs of ageing have further sparked debate about the product.

According to certified dietitian Patima Pornpojamarn, like many other products with convincing yet too-good-to-be-true properties, coconut oil can be considered just another health trend. Consumers strongly believe in the promoted advantages of it but the truth is that there is no clinically-proven evidence to back up the health claims.

"I am not saying coconut oil is all bad and we should avoid using it altogether. But if you ask me now if the oil can do all that is claimed, I can only say there have so far been no medical studies or human trials to back up the hype," said Patima.

Coconut oil is a type of edible oil extracted from the meat of mature coconut. The popular type — cold-pressed coconut oil — is manufactured in a heat-controlled environment and processed at a temperature of not over 70-80C. Such a production process ensures the properties in the oil are not destroyed by too high a temperature.

A number of people use coconut oil on the skin and hair as a type of moisturiser. Such use, according to Patima, causes no harm in most cases given coconut oil allergy is very rare.

"It's the nature of not just coconut oil but also other types of oil that they can moisturise the skin," she said. "So if you use the oil to keep yourself free of dry skin, I think it definitely works."

If consumers use coconut oil for cooking, they should be careful with food preparation.

"Different types of oil tolerate different levels of temperature," she added. "Olive oil, for instance, has a low smoke point [the temperature at which the oil stops shimmering and starts emitting smoke]. It is not suitable for any cooking method that involves a high temperature and is therefore widely used as a salad dressing. Likewise, coconut oil has a low smoke point and, as a result, should not be used for frying."

In recent years, coconut oil has been widely promoted for its weight loss properties. It is claimed that the oil contains medium-chain fatty acids which are easy to digest and metabolise, making people on a weight-loss mission believe that consuming the oil regularly will make them slimmer.

Yet according to the nutritionist, such a belief has no medical evidence to support it. Worse, the claim is contrary to what is known among medical experts worldwide.

"Speaking from a medical point of view, coconut oil contains over 90% saturated fatty acids which are likely to raise blood cholesterol levels and increase the risk of contracting certain diseases," she said. "Ideally, the recommended daily consumption of coconut oil should not exceed two to three tablespoons. Too much of it might cause a fatty liver."

Some have argued coconut oil, as well as several other oils, can fight diseases such as HIV and cancer. But further evidence-based medical studies are required. Those suffering from diabetes and kidney diseases should be extra cautious when it comes to coconut oil consumption.

"Kidney disease patients already have difficulties purging excessive minerals," Patima said. "Coconut oil contains a good amount of minerals, especially potassium. Consuming too much coconut oil will consequently require the body to work harder in trying to get rid of an excessive amount of minerals. Diabetes patients, on the other hand, are usually overweight. Too much coconut oil will simply make things worse for them."

Patima said that coconut oil remains a subject of controversy among medical professionals. When it comes to good health, her key message is moderation. Consumers should take it with a pinch of salt when they hear people talk too much about certain health products or practices. After all, too much or too little of something is usually bad.

"If you want to lose weight, do you think coconut oil alone can help?" she said. "There are several dimensions to weight loss: diet control, exercise and so forth. The same goes with good health.

"It takes diversity and balance to ensure good health. Eat a wide variety of healthy food in an appropriate amount, regularly workout and have enough quality sleep at night. That's the smartest way to go." 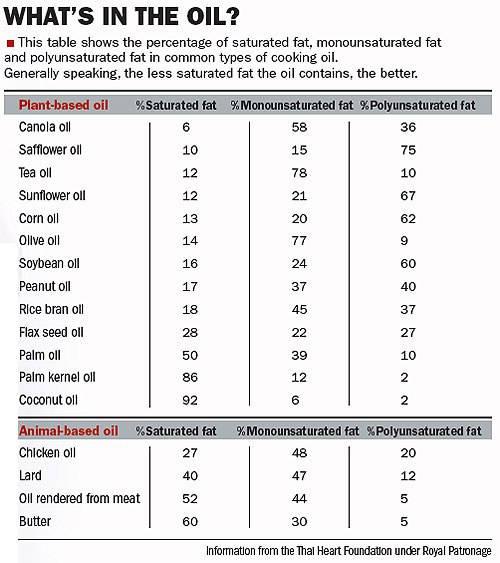