Actress Pichanak "May" Sakakorn says her former policeman boyfriend went too far when he sent a junior officer to spy on her on a recent trip to Hua Hin. 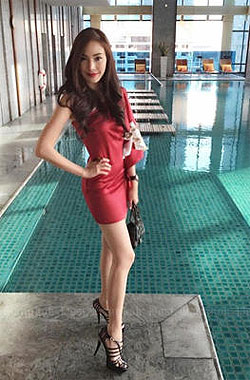 May says Thititsan "Joe" Uthanapol sent a policeman to take pictures of her without her knowledge as she was out and about in the seaside town with her manager, Jack, and model Panward "Peuy" Hemmanee.

"He called me to ask what I was doing. When I told him I was in Hua Hin with Jack, his tone became aggressive and unpleasant," she said last week.

May insisted it was an innocent outing, and that he could call her hotel and check if he didn’t believe her.

The next day, as if to prove he had indeed been checking up on her, Joe sent her images taken of the actress without her knowledge. They were taken by a man who followed her around the
town.

In one image, the man pretends to take a selfie so he can catch a picture of May entering her hotel.

May said she was alarmed to find her privacy had been invaded and called her former boyfriend to demand an explanation.

"Joe initially denied sending anyone after me, claiming police do not do such things," she said.

"He was laughing in an annoying way, as if he thought was a great joke.
He insisted it was someone from the
hotel."

May responded by posting the images on Instagram, asking anyone who knew the man in the selfie to come forward. She said an alarmed Joe called her, asking her to take the pictures down.

"He admitted sending a policeman to follow me, but said he was an innocent party and the pictures put him in an awkward position."

When Joe failed to get a response, he turned up at her parents' place and staged a scene. "He demanded I remove the pictures, or he would refuse to leave."

May called police to complain of harassment. "He did not threaten my parents, but his jealous behaviour was childish and upsetting," she said. Jack was gay and known to Joe, so was hardly a threat.

Joe has since apologised for his shabby conduct. May said she was impressed he was concerned for her welfare. However, she said there are simpler ways of showing he cares.

Joe and May parted ways last year in a messy online dispute in which friends of Joe’s claims she sucked him dry of assets worth 30 million baht. The two stay in touch, even though they do not see each other.

"We find it hard to be friends, so he shouldn’t elevate himself to the next level by assuming we can start seeing each other again," she said. 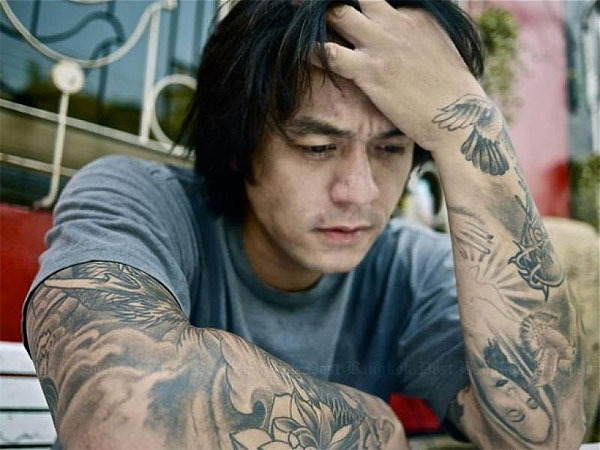 Former model Sura "Nicky The Stick" Theerakol is angry after a young model pulled out of a sexy internet movie he wants to make.

Sydney Winscott, a "net idol" with 45,000 followers on Facebook, last week withdrew from the project after a friend contacted her to say it was actually an adult movie.

Her decision angered Nicky, who had earlier posted pictures of Sydney in revealing poses, announcing she had agreed to be his female lead.

Nicky, well known for appearing in low-budget sex movies in his youth, earlier called on Facebook for cast and crew interested in his project to come forward. He said he would post the movie on YouTube rather than seek to distribute it overseas.

Sydney responded, and agreed to act in the film, though the pair did not sign a contract. Announcing the news, Nicky published images she had sent him, including one in which she covers her bare breasts with her hands.

Sydney later contacted Nicky asking him to take down the pictures. She said her family and members of her fanclub objected to her appearing in the film.

"You didn’t tell me it was an adult movie. You said it was about motor racing and I would be ideal for the part, as my chest is covered in tattoos," she told Nicky in an online exchange.

"You touted it as an international movie, and I thought there might be a bit of sexy stuff, but that’s it."

Sydney said she had a relative in the police force and would take legal action unless Nicky was willing to cooperate.

Nicky disputes Sydney’s claims she didn’t know it was a sexy movie. He said the name alone — which refers to a motorcycle racer sleeping by day and chasing after men in the soi by night — should be enough to give the project away.

"I don’t want to harass the young, but you make out as if I have trampled on your rights," he complained online. He demanded she apologise.

Sydney said she was sorry if she if pulling out of his project would force it to fold. 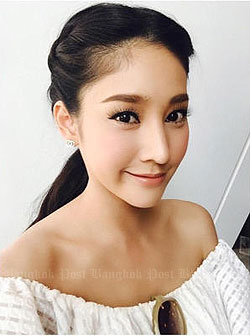 Activist actress Pattarida "Tangmo" Patcharaweerapong denies she is "chameleon-like character" who has turned to loving her former political nemesis Thaksin Shinawatra because her star is on the wane.

A newspaper columnist last week criticised her Valentine's Day remarks in which she professed her love for Thaksin. It was a dramatic change of stance for the outspoken actress after she attacked him repeatedly on the anti-government protest stage in late 2013.

"She is changing colours like a chameleon, because she’s hit on hard times," he wrote.

Tangmo denies it, saying she was speaking as a Christian, and the love she expressed for Thaksin has nothing to do with politics.

In a message to mark Valentine’s Day last month, Tangmo, who has turned preachy in recent social media utterances, declared the Lord had showed her the error of her ways and she now wanted to send Thaksin her love.

"I never thought I could love this man, but these days I have the Lord guiding my life," she wrote. The Lord had transformed her hate into love, her selfishness into understanding.

Perhaps anticipating the negative reaction which would follow, Tangmo said no amount of criticism she was likely to wear her changing her mind about Thaksin could compare with the suffering which Jesus withstood on the cross.

Tangmo and her activist father were once regular critics of the Thaksin "regime".

Her savage criticism did not go unnoticed by the former premier, who once threatened her with legal action, only to withdraw it because of her youth.

Tangmo, who abruptly lost her contract with Channel 7 last September after she accepted work for a rival digital TV channel, denied feeling upset about claims she had lost her star power.

"On the contrary, I would like to thank God for all the bad news he sends me, as it only helps me to grow," she said stoically.