published : 7 Apr 2015 at 06:00
newspaper section: Life
writer: Melalin Mahavongtrakul
Ruean Pathammarong is a century-old ex-warden's house that has been converted into a massage parlour and cafe.

Outside a century-old wooden house in Chiang Mai, tourists sit in the shade of trees waiting for a massage. When their number is called, they are greeted by a smiling officer before being lead into a communal room of masseuses.

There are surveillance cameras trained on all corners of the dimly lit room. This is more than a standard security procedure — all masseuses are inmates.

Naree*, previously an assistant nurse, has been in the Chiang Mai Women's Correctional Institution for three years and 10 months, convicted for drug trafficking. Last year, she enlisted in the massage course offered by the prison's vocational training centre. After rigorous training, Naree is now a certified masseuse.

"The sign in front says we are prisoners," said Naree. "At first, customers may feel a bit tense around us. So, we asked them, 'Does it hurt?' and 'Are you comfortable?' and we would tell them, 'You don't have to worry. It's not going to hurt.' Then they start to smile and loosen up."

Another inmate, Thida*, was charged with drug possession. She has been incarcerated for over two and a half years. Previously one of the masseuses, Thida now works in a cafe within the same facility.

"The guests do treat us honourably," said Thida. "We're prisoners, but they show courtesy towards us. I feel that they can sympathise with us. And they are generous with the tips, as well."

The ex-bar owner added that she is planning to continue massaging and open a coffee shop when she is released.

The Chiang Mai Women's Correctional Institution has offered a massage course for its inmates for a decade, as part of its rehabilitation and vocational training programme for convicted women, allowing them an easier transition to society.

After over 500 hours of practising and training, the ladies are able to offer their massage services to tourists at Ruean Pathammarong, the prison's massage parlour. They receive a salary and share tips, which are often used as start-up money after their release. In a month, each inmate can make around 10,000 baht. Aside from massaging, the prison also offers courses in sewing, weaving and more practical skills. The massage course is the most popular, as it is a skill that requires little to no start-up cost.

Seventy percent of the inmates who have attended the course practice Thai massage as a profession. While it has proven to be a good business venture for many ex-convicts, prison staff also believes it has a therapeutic quality for both the giver and receiver.

"The art of massaging requires patience and gentleness. As they were once offenders, giving a massage helps bring out their gentleness. Their previous violent behaviour lessens. We monitor their behaviour from the time they begin the course until the day they leave, and we feel that they change emotionally," said Suchaya Larmuang, professional social worker at the prison's vocational training centre.

"Some prisoners have been imprisoned for too long, and this programme helps ease them back to the outside world. They also get to interact with different sorts of people, not just fellow prisoners, which will be necessary when they are released."

Not all inmates can become masseuses at Ruean Pathammarong. To qualify, they have to be a first-time offender of a minor crime, with less than a year left of their sentence. They also have to be of good character and well-mannered. Their behaviour is taken into consideration before they are allowed to join the massage course.

On weekdays, each inmate masseuse must be ready at the prison by 6am. After undergoing a body and belongings search, they are transported to Ruean Pathammarong. They return to the prison before 6pm, where they are subjected to another search.

The next day, the routine carries on for other certified masseuses, the total number of which is close to 100.

There are usually 25 inmates working each day at the massage parlour and in the adjacent cafe on Rachwithi Road in Chiang Mai. Twenty act as masseuses, while another five serve drinks and cook food. Overseeing the facility are five prison guards.

A massage costs 180 baht per hour, and meals are reasonably priced. At Ruean Pathammarong, bookings are not available — only a daily waiting list. Guests must pay when they put their names on the list. According to staff, this is done to prevent no-shows.

This massage parlour has earned a strong reputation over the years, and has also been recognised internationally with a certificate of excellence from popular travel website TripAdvisor. Guests, however, are not allowed to take photos of the inmates.

Though the inmates work away from the correctional institution, they still have to observe all rules. Should they break any, such as quarrelling with one another or stealing tips, they could lose certain benefits such as visiting hours, access to prison activities and, in severe cases, the chance of receiving a pardon. All punishments are under the law and adhere to the rights of prisoners.

According to Suchaya, there have been no rule-breakers since the programme began.

"We also have to believe that they are ready to go out back into the public. Prisoners who could come out need to have less than one year left in their sentence. So we trust that they wouldn't want to hurt themselves now that they've received this opportunity to serve the community," said Suchaya.

The term "prison" has stark connotations, and most expect a prison's massage centre to be gloomy and lifeless. But smiling faces are all around here, especially from the guards and inmates. The place is spotless and well-decorated, and the women are friendly. They refer to their guards either as "the boss" or "mother". Without the sign in front — and without the staff uniforms — Ruean Pathammarong could pass for an ordinary spa.

"The massage was really good. The ladies were very professional. It was wonderful," said Canadian tourist Hanna Perry, who learned of the service through a Lonely Planet guidebook.

Perry, a nurse on holiday, had visited the centre the day before, but appointments were fully booked. Due to her wish to support the programme, she returned the next morning for a massage. An hour later, she was serenely sipping herbal tea, feeling relaxed.

"I really like supporting programmes that help people learn skills," said Perry. "I don't know what they've been through, but I hope that once they're released, they can get a job to support themselves. There's so much potential for growth here."

That morning, most guests were foreigners. There were barely any Thais, which may raise the question if Thai society is accepting of convicts — or ex-convicts after they return to society. Suchaya speculates that Thais have easy access to other spas and massage parlours, so they don't feel the need to come here.

As for the inmates, while not totally confident of society's reaction towards them, they still hope this new-found skill will help reshape their lives upon their release.

"My mother told me not to worry too much about society. If I can prove to them that I'm not reverting back to the same path, and if I can improve myself, my family still loves me. And that's enough," said Naree.

* Names have been changed. 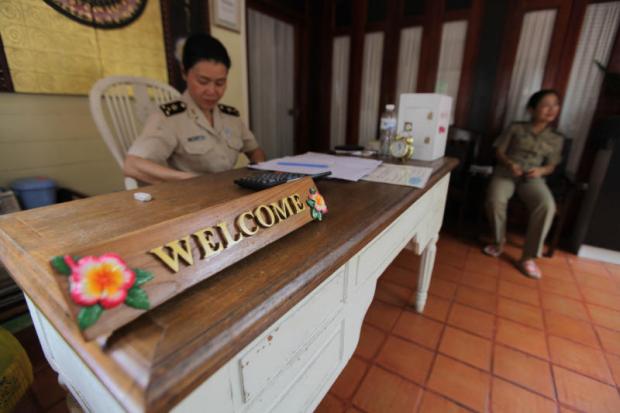 The massage parlour is managed by prison staff.