With her public installation, Sanitas Pradittasnee aims to engage Thai people in a necessary discussion about the country's art scene

‘At a glance, it’s flickering. 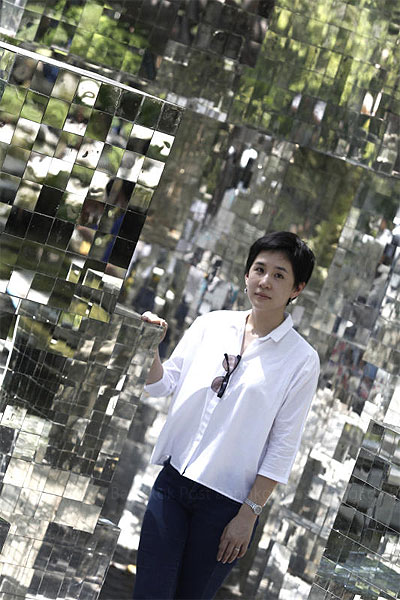 The sight of Khao Mo may initially puzzle onlookers. The towering boxes of mirrors reflect light, playing tricks on the eyes. It appears almost illusory — a distortion in space. At certain angles, it appears to blend in with the green of the surrounding trees.

“I’m interested in the existence and non-existence of the materials and location. It also goes alongside Buddhist philosophy. We are here, and then we are gone. We continue to decay,” she said.

Nestled in the busy Siam Square shopping area, Khao Mo is now being displayed at Park@Siam, next to Chula Book Centre, as a permanent art installation. And the quietness and serenity of the place could fool many into thinking they’re no longer in the middle of the city.

“Khao Mo is a kind of art that has existed in the landscape since ancient times. Like Chinese gardens, we can see mountains with shapes like clouds situated in a well.

“A garden is like a universe. In China ... gardens would be built for [emperors’] enjoyment. Their Khao Mo is like a cloud that represents heaven, and we are influenced by that,” said Sanitas. Khao Mo was recently placed on the 2015 Aesthetica Art Prize Longlist. The award drew in over 3,500 entries of contemporary artwork from more than 60 countries.

Sanitas is the only Thai to emerge this year as one of the 100 finalists. The award is presented by Aesthetica, a British art magazine, in partnership with York Museums Trust.

Sanitas began working as an artist about eight years ago. She graduated with a degree in landscape and architecture from Chulalongkorn University before pursuing her master’s  degree in fine arts in England.

“I’ve always been interested in an artistic approach to landscape,” she said.

“I don’t want landscape to end with just function and beauty — I also want it to be deep and meaningful.”

Influenced also by the Buddhist and Hindu belief of Mount Sumeru — a sacred mountain that is the centre of the universe — Khao Mo symbolises being on top, close to Lord Buddha himself.

“It is a mountain of belief,” she said. Her contemporary interpretation of Mount Sumeru reduces the concept down to a silhouette.

It is made up of small, pixelated units, mirrors that are made into a larger box and connected, like a three-dimensional puzzle.

“The mirrors can be used to reflect people, but people can also reflect on themselves and their beliefs here. They don’t have to believe in the same way that we do. They can reflect on their own thoughts and spend time with themselves,” she said.

Within Khao Mo, a thick layer of small pebbles graces people’s footsteps as they walk. Sanitas used soil when the piece was on display at Bangkok Art and Culture Centre in late 2013, but opted for pebbles when it was relocated outdoors.

“With soil, we go back to the roots of humanity. What complicates us is the material things that we create. So we want to take people back to their origins, back to basics.”

After experiencing the British art scene, Sanitas said culture shock was unavoidable upon her return to Thailand.

“The art scenes in the two countries are very different. London is like a centre, a capital, for artists. They have loads of markets, critics, theorists, major artists and publications. People are more open and things were happening everywhere — they even have an arts council. Here, things are more quiet and reserved. Everyone has to find their own way. On weekends, while we head to shopping malls, Londoners go to galleries and museums.”

Artwork in Thailand is often reserved for museums, galleries or commercial spaces. Having installations, sculptures and other artwork on display in free public spaces is a rare event, perhaps contributing to the lack of understanding and concern many Thais have regarding art.

“Thai people can be naughty,” she said, laughing, slightly defeated. “I have done a few outdoor installations. And now I’m starting to get how some Thai people are and bearing with them. Some have climbed up the art installations. There’s a sign right next to it, but still things happen.”

Sanitas said she often welcomes people to touch and interact with her work. That has been her goal all along. But daring teenagers can be problematic. Sometimes security guards, fearing the piece will be destroyed, end up putting ropes and fences around the installation, preventing anyone from accessing it.

“Many people lack access to art because it is often cooped up in faraway museums, which means the people lack true understanding of art. But if we leave it on display as an open sculpture, it is open to people’s interpretations.”

Sanitas believes that Thais could still do more in terms of supporting and promoting the country’s art scene. There are only few outdoor art installations in the city, and some of those are located in buildings and commercial spaces, not open to the general public.

More outdoor installations, festivals and late-night openings are some of the things Sanitas suggested to improve the situation.

“Outdoor installations can engage people, inviting them to interact with artworks. People can then spend time, reflect and communicate with art,” she said. 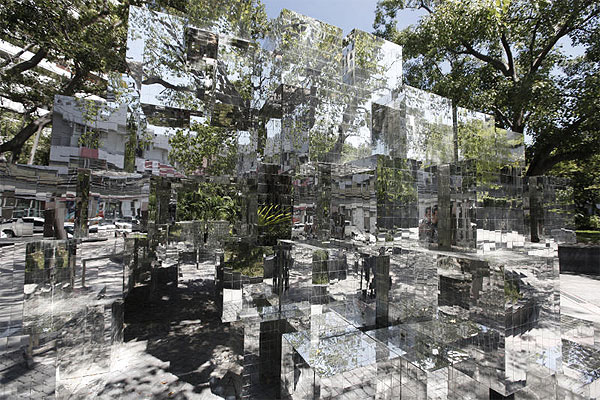