Tak's figure 'not at its best'

Actress Bongkot "Tak" Khongmalai and a feisty member of a rental yacht crew who allegedly leaked pictures of her in a bathing suit appear headed for court after a row in which Tak accused her foe of selling her body.

Tak spoke out last week after pictures of her striking poses on board a yacht emerged on social media. The actress, who has a young son, appears to have lost the trim figure she was showing off to the media in recent months.

The pictures were taken on board a rental yacht which she and her husband, billionaire Dtac founder Boonchai Bencharongkul, booked for a pleasure cruise in Phuket a couple of months ago.

In some of the images the pair appear together, though Tak, wearing a black bathing suit, also poses alone. A friend of her husband's, Charlie, took the pictures, but says he didn't leak them. Tak said they were taken as a keepsake, and she never thought they would be released publicly.

When the images first emerged, Tak mistakenly assumed a member of the crew took them. She blasted the hire company for breaching her privacy, and sent a lawyer to Phahon Yothin police to lay a complaint.

"What rotten luck. Expensive? Yes, it was. And on top of that we suffer someone taking pictures on the sly!" Tak wrote. She said her figure was not at its best, and she would rather the public not see her that way. 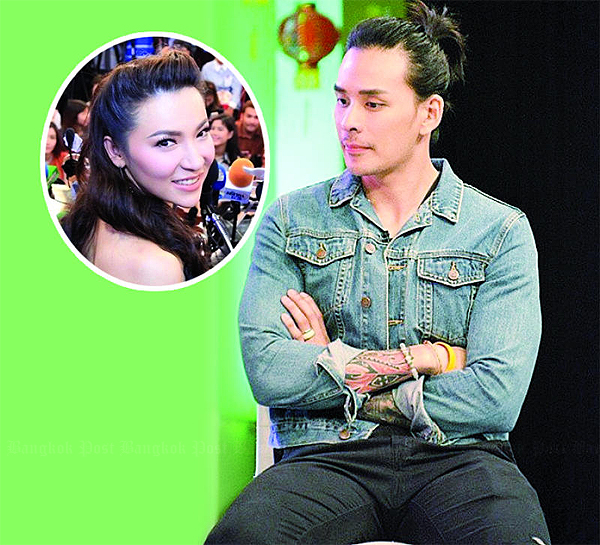 "There were four on the boat ... two making food, one steering the vessel, and Charlie.

"I should say up front that I don't want any trouble, as I am busy raising our son. But those staff on the boat are just appalling."

Denying they took the pictures, one of the crew, who called herself Rose, said Tak's claims had harmed the company's reputation.

"We're professionals and Tak is not the first celebrity to set foot on the yacht," she said. "Her behaviour is actually worse."

The exchange deteriorated further when it emerged Boonchai’s friend, Charlie, had actually taken the images.

Tak, who evidently had forgotten, found out the truth when Charlie contacted her to say he took the pictures on his smartphone. However, he denied leaking the images, suggesting the crew was to blame.

"Charlie told me he asked Rose for her phone number. She said she was a fan of mine, and asked for the images in return for the number," Tak added later, accusing Rose of selling her body.

"I don't want trouble with you, Rose, because you're not important. You're just some lowly person on a yacht.

"I am not interested in what you say, because we have different status. You can't compare with me," Tak said.

A clearly stung Tak insisted she was the damaged party. She said she was referring to Rose’s behaviour rather than her social standing.

"Don't give me grief about having a rich husband, because we love each other from the heart," she said.

"I still help my mum sell chilli paste, and haven’t forgotten my roots. In my view she did wrong, and that sets us apart," she said.

Rose, who has declined to say whether she leaked the pictures, said the courts will decide the matter. Police are investigating. 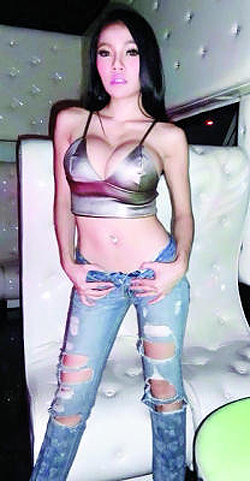 Model Amonwan "Amie" Sirikittirat insists she is a good mum, after a critic on social media revealed she is a mother to two children whom she keeps hidden from the public view.

A tearful but defiant Amie took the children before reporters last week, after model and actress Irin "Pel" Srikaew wrote on Instagram about an anonymous, jealous fan of hers, widely thought to be Amie.

"She dumps her kids with her taxi driver partner while she makes sex movies in Japan. She hides her children, while putting on a good face for the media," Pel wrote.

Denying the claims, Amie insisted she was a proud mum, and the children accompany her everywhere.

The children, born by different fathers, were conceived with love rather than lust or carelessness. She admits she now may have a third one on the way.

"When they go to school and they have to introduce themselves, they say proudly, ‘We are Amie Maxine's kids,' ” she said, referring to her past as a winner of the Miss Maxine modelling contest.

Asked how her children feel about her past, Amie said the kids are oblivious.

"Their duty is to do well at school and love their mum, just as I love them. However, they are both old enough to read and write, so might get hurt. People should criticise me alone, and leave them out of it," she said.

The father of one of the kids, referred to as a taxi driver, in fact has a good income, but drives a taxi as a hobby.

Her boyfriend, tearaway Taiwanese model Howard Wang, had helped raise the children since they were little. Former boy band star Howard, who moved to Thailand as a child, was deported a couple of years ago on drugs and assault offences.

Amie said she had missed two periods and suspects she is pregnant with her third child. "Howard has asked me to go for tests to confirm the pregnancy, as he is excited about being a dad," she said.

Asked about Pel’s remarks, Amie said she hopes she thrives at what she’s doing. "Do harm to others, and fate catches up with you," she said. 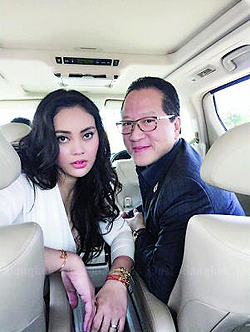 DJ and actor Paranyu "Tack" Rojanavudtitham and his girlfriend DJ Sakoltala "Ton Horm" Tianpairojt say their most recent parting is likely to be their last.

The pair announced news of their parting last week, after Ton Horm said she discovered Tack had been playing around.

Tack and Ton Horm, who have broken up a couple of times before, are known for their extravagant reunions.

Tack once painted himself in black and donned a wig to resemble a Malaysian Negrito. Wearing a loin cloth and clutching a red rose, he surprised Ton Horm at work.

Earlier, Ton Horm, in response to a dare by Tack, dressed up as a Thai folk dancer, complete with hair in a bun and white face paint, to say sorry for calling it quits with him on Instagram.

This time around, Tack and Ton Horm are less hopeful of a sweet reunion.

After talking recently about setting up a marital home and having children, the couple now admits that’s unlikely, as they are better off as friends.

Tack was the first to break the news, saying Ton Horm called off the relationship a week ago.

"My father wants to go back to Chiang Mai; that was a factor. If I had to go back and forth, it wouldn't work. Women were also part of the problem, though there was no third hand between us," he insisted.

Ton Horm, going before the media a day later, said she had caught out Tack being unfaithful, after a friend tipped her off.

She declined to go into detail.

"I asked Tack 'what happened?' but he did not answer," she said.

"If anyone wants to sheet home blame, please send it all his way."

On social media, Tack has lashed out at critics who said his conduct was unmanly.

"I have been wilful for ages now; I can't see why it's an issue. Plenty of people around me understand. I don't have to listen to the carpers and critics," he said.