A small fish with a long history
Life
Social & Lifestyle

A small fish with a long history

'Pla salit' has been eaten by Thais for centuries and its special flavour when dried makes it a chefs' favourite.

Pla salit (gourami) is a freshwater fish that Thais have relished for centuries. It is not very big, but its great virtue as a food fish far outstrips its modest size. 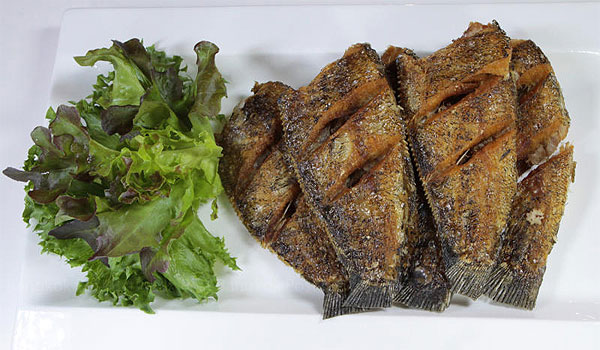 Pla salit differs from many other kinds of fish in that it is not eaten fresh. It must be thoroughly sun-dried to reveal its special flavour. Once it has been dried its fat, especially that in the belly, will give it a shiny appearance, and when it is fried and the aroma of the cooking fat floats out from the pan, mouths will water. It has a fragrance unlike that of any other fish.

Unfortunately, the special, seductive qualities of pla salit are not always what they once were, since the methods used in farming the fish now stress quantity and speed in getting them to market.

Before looking more closely at this issue, I’d like to give a fuller idea of the fish itself, the places where it is farmed and techniques used, and the way it is processed before it is sold.

Pla salit is found throughout Thailand in all freshwater sources. When village fishermen lower their nets into rivers, canals or ponds, they will bring up many kinds of fish, both large and small, pla salit among them. Of course, over the years people have devised various ways to prepare almost all of these fish for the table, but pla salit has especially attractive qualities that have resulted in its being farmed and processed in quantity before it is sold or eaten.

The question of who was first to raise pla salit commercially is subject to debate. One farm at Tambon Don Kamyaan in Suphan Buri claims to have been the first, but this is contested by others at Amphoe Bang Bo and Amphoe Bang Phli in Samut Prakan. Who it was that got there first has not been decided, but in these early breeding operations the techniques used did not differ.

At Bang Bo and Bang Phli, right from the first they were raised in large quantities and became so well known that their fame overwhelmed that of the fish raised at Don Kamyaan in Suphan Buri. They were bred in ponds that were big but not very deep. Plants that the fish liked to eat, like certain kinds of grass and reeds, were introduced.

Then breeders would close off a small, square area of a pond near the edge using a fine-mesh netting that allowed water to circulate in and out. The water plants would be cut down and allowed to decay, and then male and female fish would be put into the enclosure to breed. The female laid eggs that they attached to the stalks of the dead plants.

The decaying vegetation caused the blooming of a great number of plankton, which were ideal food for newly-hatched baby fish. Once they matured, the breeder would open up the enclosed area to allow them to look for food among the plants along the edge and in the middle of the pond. The fish could also feed on the algae and duckweed that filled the pond, plants that also allowed plankton to breed in great numbers. After seven or eight months, the pla salit were full-grown.

To prepare the fish for sale they were scaled and cleaned, then the heads were removed and the fish were salted for a single night. In the morning they were removed from the salt solution and set out to dry in the sun, then turned over in the afternoon to expose the other side to the sun. Drying continued for two days before someone came to buy them.

Pla salit that had been properly sun-dried, as mentioned above, would have stomachs shiny with fat. There would also be a clearly visible line that ran along the middle of the body from the head back to the tail. A pla salit with an appearance like this was of the highest quality, but was likely to be expensive because the dryer the fish, the lighter it became. One kilogramme would include many of them, resulting in a high price when sold by the kilo.

This is how the fish were farmed at Bang Bo and Bang Phli. But today there are problems that have had an impact on the old methods. The area has become highly modernised, with fewer natural water sources. The price of land has soared and many of the old fish-breeding ponds have been replaced with factories or residential estates.

The choicest places for raising pla salit have now shifted to Suphan Buri and other provinces, and they are now bred on farms. At Don Kamyaan, where they were once raised using the old techniques employed at Bang Bo and Bang Phli, they are also farmed now.

This approach starts with the cleaning of the ponds before the fish are put in. The fish are babies brought in from hatcheries and they are fed with commercial fish feed that also comes from factories. Successful pla salit farmers feed them quantities of food appropriate to their age and size. Feeding times are strictly controlled, so the fish are fed when they are hungry. The feed itself is formulated to produce quick growth, with the result that the quantity of pla salit produced in Suphan Buri and at farms elsewhere is both constant and enormous.

When preparing the fish that have been farmed this way for the market, they are scaled and cleaned, the heads are cut off and they are soaked in iced salt water overnight. In the morning that are taken out of the salt solution and set out in the sun, where they are dried to the point where they begin to stiffen, and on that same day they are sent to shops for sale or are purchased by a market trader.

Shops in Suphan Buri or other provinces that sell the fish set them out for display in the shade. It isn’t thought necessary to keep them in the sun or to continue to dry them as they are being sold. Basically, the trader who buys the fish at the farm for resale loads them into a truck and delivers them to sellers as quickly as possible, and the shops waste no time in selling them. This is the process by which they are marketed.

It could be said they are sold before they are properly dried, and one motivation for doing things this way is that the fish weigh more when they are still moist. One kilo will contain only a few fish, which means the price will be lower, something that attracts customers. They see only that pla salit that come from places where they are not raised in ponds, as they are at Bang Bo and Bang Phli, are inexpensive.

Many of the customers who buy the fish that have not been completely dried run into problems with them, since the vendors wrap them in paper to absorb the moisture they still contain and then package them in plastic bags. This is a terrible way to handle them, because pla salit that are not fully dry stink when they are packaged in a way where the moisture is retained. The soaking in salt water keeps them from decaying, but they give off an unappetising odour. Even after frying the rotten fish smell does not go away.

This means that the special, delectable aroma of pla salit dried so that the belly fat makes them glisten is replaced by a stench that is likely to send connoisseurs of this popular fish running.

This problem does not affect all of the fish from Suphan Buri and elsewhere, there are many that are thoroughly dried and smell delicious.

Still, when you find yourself craving some pla salit and head off to the market to buy some, remember that some are better than others. Take a good look and perhaps a sniff or two before handing over your money.