published : 12 Oct 2015 at 03:46
newspaper section: Life
writer: Melalin Mahavongtrakul
The recent reopening of the Erawan Shrine was presided over by the chief of Brahmins.

A man dressed in white blew into a conch as if it were a horn. Joss sticks were burning. Heads bowed but people's lips were praying. A screenplay on a golden tray was engulfed in a cloud of white smoke. Surrounding the tray was a feast which included a pig's head, Thai golden desserts, fruit, boiled eggs and seafood.

This feast was an offering to the gods during buang suang, a ritual practised by Thai film and drama crews to seek blessings from the gods. It is believed that this would make any showbiz project successful.

For many Thais, a ritual to bless a new venture or a house requires the presence of Buddhist monks and their spiritual blessings. But many times, Thais turn to Brahmin rites that mix Hinduism with Buddhism and folk beliefs -- for example, all Thai film and television productions always have a Brahmin rite before shooting begins, with an elaborate checklist of offerings, while many big businesses go for both Buddhist and Brahmin invocations. Not to mention the Royal Ploughing Ceremony, which illustrates the official Brahmin sanctity to the nation and society.

The Erawan Shrine houses the statue of Brahma -- slightly damaged and restored after the Aug 17 blast -- and the Hindu god's fame has made its status cosmopolitan. Still, the influence and relevance of a Brahmin rite remains strong in Thailand in many ways.

The best example is the Brahmin rite performed to bless a film or television shoot. Manasnan Thanakritcharoensin, 55, is dressed in creamy white. She refers to herself as ajarn (teacher) and sometimes Brahmin -- a Hindu priest. Manasnan's team of five was recently hired to orchestrate a ritual for Horror Friends, a new series on Channel 5. 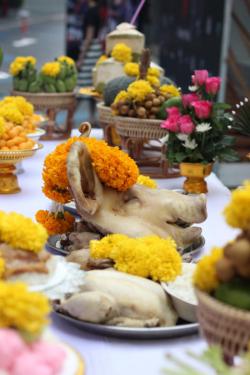 A pig's head is believed to bring solidarity and success.

"We have to invite all the gods -- like Indra and Brahma -- as well as calling on all the previous kings of Thailand, to witness this ceremony," explained Manasnan. "We have to tell the gods about this particular film or lakorn in order for it to prosper."

The lady pointed out different trays on the white-rimmed table. All of the oblations carry good meaning. According to Manasnan, the pig's head signifies solidarity and success as a team, apples and Chinese pears bring financial luck, a pineapple (with its many "eyes") means there will be viewers from all directions, and the boiled eggs mean never-ending success. The golden desserts are believed to bring wealth.

A ritual is usually performed at an auspicious date and time. Many ceremonies start around 9am. Or, to be precise, at 9.09am.

"Nine is an auspicious number. The writing on a religious talisman resembles how the number '9' is written in a Thai format," she said.

Nine, in the Thai language, is pronounced as kao -- which also mean "taking a step". Most Thais interpret this number to mean moving forward in ranks, achieving success.

Manasnan said each ceremony costs around 25,000 to 30,000 baht in a package deal, which includes the team's service charge, as well as the cost of preparing all the oblations. The host would only need to prepare the venue. The team will handle the rest.

Manasnan has been performing these rituals with her team for eight years. She studied horoscope, astrology and religion.

"Women can perform these religious services, too. We have to pray, practise dhamma and follow religious precept," she said. At times, a male priest in Manasnan's crew may conduct the ceremony in her place. This depends on the client's request as some prefer to have men conducting these rituals. Other rituals the team can perform include asking for the gods' blessings for household shrines and commercial buildings. 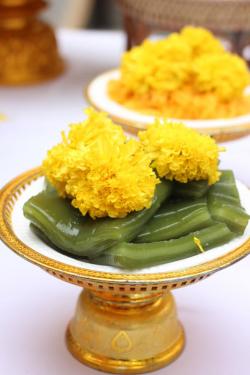 According to Komkrit Uitekkeng, an instructor from the Department of Philosophy at the Faculty of Arts, Silpakorn University, the buang suang rituals of Thai showbiz originated from the wai kru (giving thanks to teachers) ceremony practised by traditional Khon and likay performers. This tradition has been passing down from one generation of performers to another. Over the years, the full wai kru ceremony was downsized and mixed with Hindu practice, resulting in the present form of the buang suang ceremony presided over by those who call themselves Brahmins.

Brahmin, by definition, means a varna -- a social class in Vedic Hinduism -- of priests and teachers. The priesthood is passed from fathers to sons.

The use of Brahmins presiding over religious ceremonies in Thailand can be dated to the Dvaravati period, said Komkrit. Many ancient kings in Southeast Asia brought in priests from India to perform coronation rituals in the hopes of rising up to the same rank as the king of India -- the centre of civilisation in that era.

Brahmins have been serving in the Thai royal court as officials and performing royal ceremonies since the Ayutthaya period. The involvement of Brahmins continued to the Rattanakosin period. During the reign of King Prajadhipok (Rama VII), due to the government's budgeting reasons, many officials were laid off. Some Brahmins were affected. They returned to their native provinces to take up other professions. Back then, they were not allowed to performed rituals for commoners.

A great change came during the start of King Bhumibol Adulyadej's reign. By royal decree, Brahmins were allowed to conduct ceremonies for the people. Families of Brahmins who relocated during King Rama VII's reign could now revert to their old profession.

The centre of Brahmin activity in Thailand is at Devasathan, a Hindu temple in Bangkok's inner city, which was built more than 200 years ago.

In Thailand, Komkrit said there are three types of Brahmins. One is brahm luang or royal Brahmins who mainly perform royal ceremonies like the annual ploughing ceremony. They come from a long family line of Brahmins in Thailand. The recent reopening of the Erawan Shrine was also presided over by the chief of Brahmins from the Devasathan. 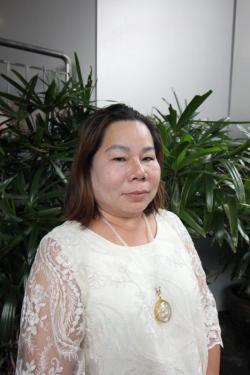 Second are the Indian Brahmins -- priests from India who relocated to Thailand. Third is what Komkrit called brahm chao baan or folk Brahmins -- the only category of Brahmins not from a bloodline of priests. They're commoners who merely have knowledge about ceremonies and rituals.

The definition of the word Brahmin has long been a subject of confusion, said Komkrit. Nowadays, some people only view Brahmins as people who can perform religious ceremonies. They don't always have to be from the lineage of priests.

"From a religious viewpoint, anyone calling themselves Brahmin when they're not born in the Brahmin family is wrong. Essentially, they have no right to," said Komkrit. "However, from a modern viewpoint, these people are also entitled to their own belief. They have religious freedom, a right to believe as they choose."

Komkrit said that, as long as they're not cheating people, there's no real problem for some -- like Manasnan -- to call themselves Brahmins. In the end, it also depends on the believers. They can also exercise their right to believe.

"It depends on how people interpret and understand the scripture," said Komkrit. "If they know about the scripture and still choose to believe in something, then that's within their right to do so."

In recent years, there have been more women entering this profession. Women can also become Brahmins, but only when they're married into the family of priests. They can assist their husbands during a ceremony, but rarely are the main conductor.

"In Thailand, there are more spaces for women to be in this profession. Since the olden days, we've always heard of mae mor or older women who practise witchcraft. That's how we can have female Brahmins here without finding it strange. But, again, this practice is not in accordance with the scripture."

Komkrit added that the format of religious belief in Thailand tends to mix aspects from different religions together. We fear spirits of the dead and worship holy objects. We conduct ceremonies using Brahmins, yet we make merit with Buddhist monks. All these while we call ourselves Buddhists in this land of spiritual hybrid. 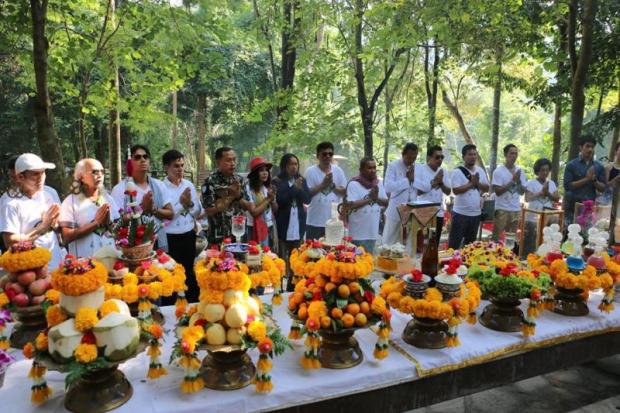 A typical buang suang ceremony before the start of a film production.

"At its foundation, we are of a primal 'ghost religion', believing in spirit possession, communicating with the dead, spirit channelling and talismans. And we only accept Buddhism and Hinduism in aspects that don't contradict with the existing, primitive ghost religion," explained Komkrit.

"We mix everything together in our own Thai style," he added. "Most people don't study religion seriously. They only take aspects of certain religions that they're pleased with or that would benefit them. It's capitalist thinking. And, in the end, only the image and format of religion is left. We'll only conduct these rituals, the meditation and the merit-making, to ease our mind, or when we believe it would make us rich." 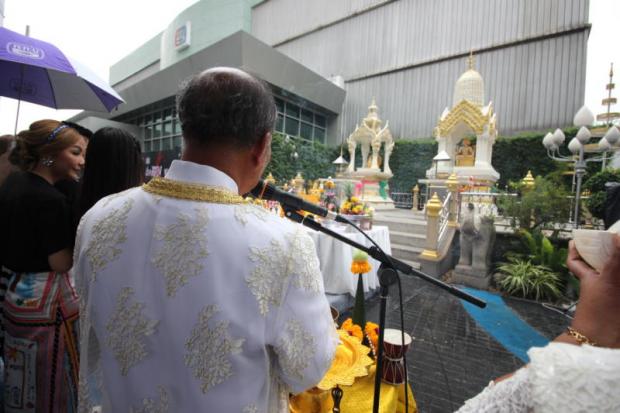 Praying to the shrine of Brahma, the god of creation in Hinduism. 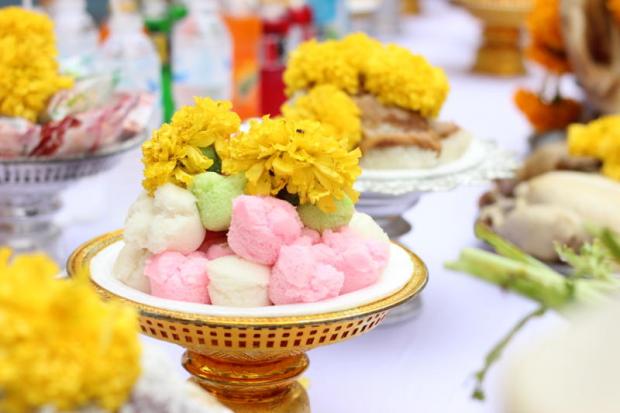 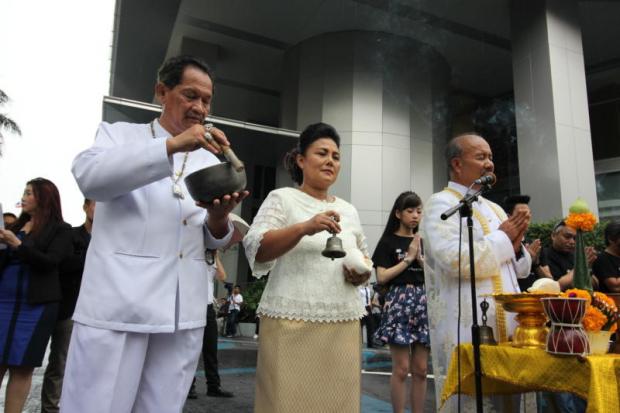 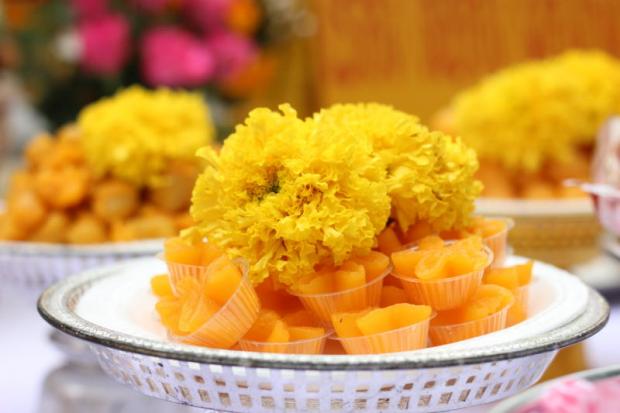 Thai golden dessert in an oblatory feast is meant to bring wealth.