Narongrit Thongprue has a big plan. The chief of Tambon Administrative Organisation in Thung Wa, a small and low-profile sub-district in Satun province, has worked on it for more than a year: he wants to push his beloved home to be listed as a Unesco Global Geopark.

"Geopark does not mean only a geological area. It also covers other aspects including natural, cultural and historical heritage," he said.

A designated geopark covers large public areas that people can also live in. They are not owned by any organisation, not like national parks which are managed by the Department of National Parks, Wildlife and Plant Conservation. Geoparks are jointly managed by local communities, local authorities and national agencies.

"If Satun passes the evaluation, the province will be listed as the fourth Global Geopark in this region in 2016," he said.

How did you come up with the geopark idea?

It started when the first fossil was found in Tham Le Stegodon cave [located in Thung Wa district] in 2008 by a villager. He went inside the cave with his friends to fish for giant river prawns. He came across a strangely shaped rock with eight ridges on the surface. The rock was later identified by a team of experts that it was the jaw and two teeth of a Stegodon, a proboscidean with a physical resemblance to present-day elephants, which walked the Earth 1.8 million years ago.

After we found the fossil, I thought about Phu Wiang [in Khon Kaen] where dinosaur fossils were found. Phu Wiang was developed as a tourist destination. It inspired me to build a museum for the Stegodon fossil and also the other 300 fossils we found in the cave. The museum can be a knowledge-based centre for our community.

At that time I didn't know about geoparks. The idea was recommended to me by the Department of Mineral Resources. I was advised to expand the museum project to be a national geopark as there are also other places in Satun where we found many types of fossils dating back 500 million years.

Fortunately, I also get support from the Satun governor. Together we will drive the project. I have also been appointed as a director of the Satun Geopark office to carry on the mission.

Satun is the only province in the South that a Stegodon fossil was found. If you look at the fossil, some people may think that it is just an ancient rock. But for me it's like a diamond. It is proof of ancient history, and can be related to local stories which I hope can be told to promote tourism.

How big is the proposed geopark?

The park will cover 72 sites in four districts including Thung Wa, Langu, Manang and Muang districts. The sites can be grouped into three categories. The first group is karstic such as Tham Le Stegodon cave and Phu Pha Phet cave.

The second group is fossil sites which are mostly found in Thung Wa and Langu districts. The fossils are from the Paleozoic era spanning 542 to 251 million years ago.

The third group is the group of islands, including Tarutao, Lipe, Khai and Hin Ngam. They are the tourism magnets of Satun. With the launch of the geopark, we will give people knowledge of those places.

What are the benefits of being listed as a geopark?

Take Langkawi in Malaysia as an example. It earned the status six years ago. The area has been developed to be one of the well-known attractions in Malaysia. More than 3 million people visit Langkawi every year, while locals can earn a lot from the tourism industry.

Are there any do's and don'ts to achieving the status?

I just finished a 15-day intensive course organised by Unesco in Greece. They recommended not building any five-star hotels or creating activities that change the ecosystem.

For example, they don't recommend putting lights inside caves for tourists as the lights can interfere with the life cycle of bats.

What will you do to achieve the plan?

We have established co-operation between communities, Tambon administration organisations, district offices, provincial offices and several related ministers. We drafted the three-year plan with an estimated budget of 1 billion baht.

During the first phase, we will open the museum located in a 25-rai plot of land in Thung Wa district. The project will cost 40 million baht and be managed by the Tourism Department.

As the director of Global Geopark Office, I signed an MoU with Rajamangala University of Technology Srivijaya to produce cookies and chocolates in the shapes of ancient animals such as nautiloid [ancient squid], ammonoids [squidlike creatures with coil-shaped shells] and trilobite [distant relatives of horseshoe crabs].

We will open a restaurant with a menu named after those animals. I call it an educational menu as I like people to be familiar with the ancient fossil names.

What makes you confident that Satun will be listed as the next Global Geopark?

The government announced on Aug 14 last year that Satun would be the first geopark of Thailand. In September, we submitted all required papers and related research to the committee of the Geoparks Network.

The evaluation will start around April next year. If they give the green light, Satun will be listed by the end of 2016. 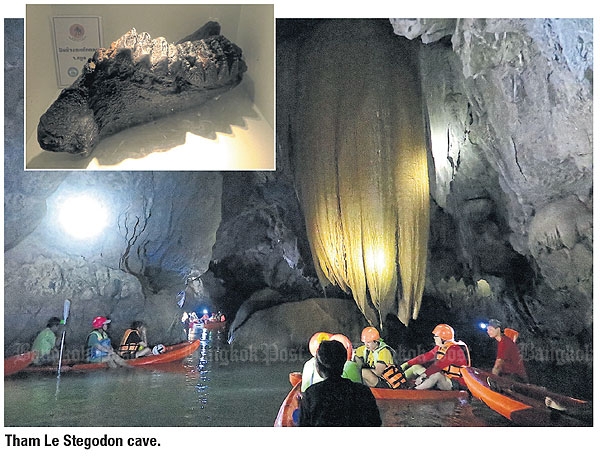