The Muslim community is thriving in the city, despite a changing world that pushes them to forsake their traditional beliefs

Five times a day, the sound of prayers can be heard around the 200-year-old community surrounding the Chakrabongse Mosque. The yellow building -- under constant repainting and renovation -- has been the centre of this Muslim community for over a century. From its peaceful ambience, not many expect that the neighbourhood is just a few blocks away from Bangkok's most tourist-infested and alcohol-filled area, Khao San Road.

The Muslim community at the Chakrabongse Mosque has been around since the early Rattanakosin period. The founders were goldsmiths that were prisoners of war taken from Pattani. As craftsmen, they served the court of King Rama I and were given this piece of land near Ratchadamnoen Klang Road and Bang Lampu area of inner Bangkok as a place to live.

As Thailand is gearing up to welcome as many as 30 million tourists a year, the juxtaposition of touristy hot spots -- congested and sometimes chaotic -- and old-fashioned Islamic quarters becomes more marked. On Nov 1, a seminar on Muslim communities of old Bangkok will be organised by Lek-Prapai Viriyahpant Foundation. The venue is at Maha Kan Fort. Representatives from Chakrabongse, Ban Tuk Din and Mahanak communities will attend as guest speakers to discuss the changes their neighbourhoods face and the future they look forward to.

There are almost 200 mosques registered within Bangkok. Their presence, alongside Muslim communities, have been part of Bangkok and Thailand's culture for hundreds of years.

Opas Mitmana, a 61-year-old Muslim, has been living in the Chakrabongse Mosque community all his life, and his family has been here for generations. The neighbourhood now houses over 50 families, with the majority of the population being Muslim.

Opas still remembers when he used to play in Sanam Luang. He misses the days when his close-knit community wasn't surrounded by pubs, bars and hotels. Tourism has brought great change to Opas' community and to Thai society as a whole.

"Nowadays, you can even see farangs kissing in front of the temple," lamented Opas. "I think we're too open about tourism. Our Thai culture -- both Buddhist and Muslim -- is affected greatly by it. Our traditions, costumes and manners are being swallowed by the foreigner's way of life."

Short skirts. Revealed flesh. Drunkards passing out on their hostel doorstep. Opas often frowns at these sights. As a Muslim, he doesn't agree with improper clothes and drinking.

According to Opas, Khao San Road was once a quiet zone that tourists would come to for relaxation. After it became a hit, change came knocking right on the mosque's front door.

Opas has welcomed Muslim tourists from Indonesia and Malaysia who come to pray at his mosque. The businesses nearby also profit from foreigners. But these benefits are being overshadowed by the drawbacks.

Just a few metres from Opas' house, his neighbours have converted their place into a small inn for tourists. Strangers can now roam free through his neighbourhood. He was against the idea, but preferred not to start arguing with his fellow community members.

"I just wish they'd asked for others' opinions first. This doesn't concern them alone," he said. "I don't want to fight with them, though. We have to see each other until we die."

Alcohol and drugs are increasingly becoming a problem. He has found young people sneaking off for a drink after prayers. Some girls like to wear shorts now, refusing to put on their hijabs. But many also choose to retain and keep to their Muslim conduct.

While not in agreement, Opas adopts an understanding attitude as long as people still dress and behave accordingly once they step inside the mosque. Co-existence between old and new is what he believes to be the way.

"I can accept our changing world, but I'll still hold onto my Muslim belief. That's how you live in harmony with everyone else. You don't always have to oppose everything openly." Circumstances are not so different at the nearby community of Ban Tuk Din Mosque, located just a short walk away from Chakrabongse. The community's main entrance is on Tanao Street, only a few metres from Khao San Road.

Ban Tuk Din also used to be a community of craftsmen two centuries ago. But the art has died out as no one would carry on the trade.

"There was nobody who would pass on their knowledge, either. They were quite possessive of their craft," said Thamnu Lengkayan, 57. Over four generations of his family have lived in this area.

The community at Ban Tuk Din now has over 200 families, half of which are Muslim. Their mosque, however, was only built around 30 years ago. The community used to go and pray at Chakrabongse Mosque before they decided to build their own.

Thamnu also faces problems with many outsiders passing through his community. Although he shares a similar view with Opas, he thinks it's not enough just to strengthen one's community and keep one's own kids in line. How could one community remain strong when the rest are crumbling down?

"We can't just watch out for our own community. Even if we get rid of the problems in ours, our boys and girls are still surrounded by others. Every person and every community needs to work together, solving problems as a whole," said Thamnu.

While the people of Chakrabongse and Ban Tuk Din battle with an army of tourists, the community at Mahanak Mosque lives in a totally different setting.

Mahanak area is famous for its fruit market. It is situated right next to Bobae, a commercial district for wholesale clothes occupied mainly by Thai-Chinese families. Day and night, the road running in front of the community is a clamour of cars, noise and smoke.

"The place is alive, even at 3am. I don't recommend anyone pass through here at that time. The traffic is awful," said Harin Sirikadiya, 71, a member of Mahanak Mosque community who will also give a talk this Sunday.

At the deck of Mahanak Mosque, Harin pointed to his surroundings. There are now over 400 families in his community, and they've been around for over a century. He still remembers when the canal -- cleaner and wider -- was bustling with boats.

"We were here before the Chinese," said Harin. The wholesale market at Bobae has only been booming for over three decades. Many families in Harin's community now sell clothes.

Despite the mixed culture -- Thai, Chinese, Buddhist and Muslim -- Harin said everyone lives in harmony with one another. This seems to be one similar factor throughout the three communities. It's actually not difficult to coexist with different beliefs.

"Regardless of religions, we respect each other like brothers," he said.

A public talk organised by Lek-Prapai Viriyahpant Foundation titled "Muslim Communities Help Creating The Capital" will be held at Maha Kan Fort on Maha Chai Road on Sunday, Nov 1. The talk is set to commence at 9am and will go on until noon. 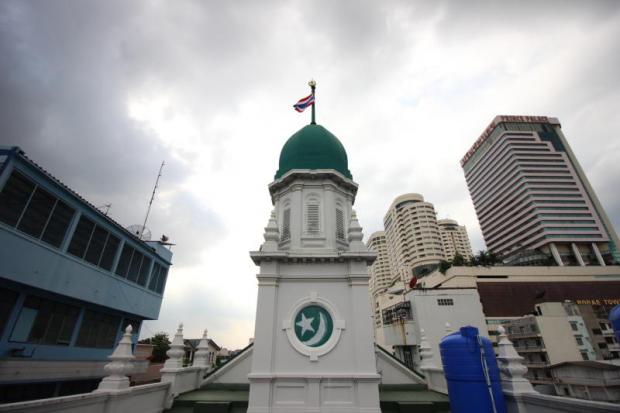 Mahanak Mosque sits right in the busy centre of the wholesale commercial district. 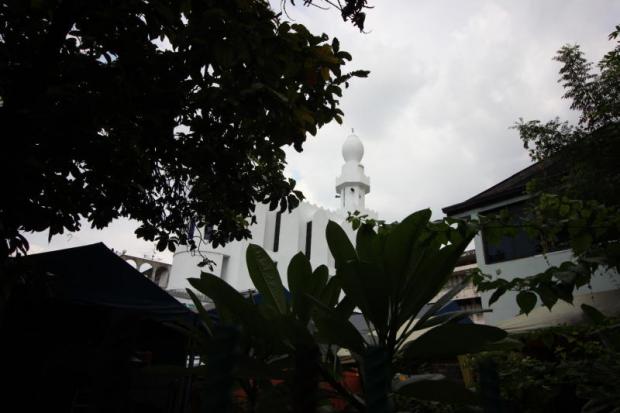 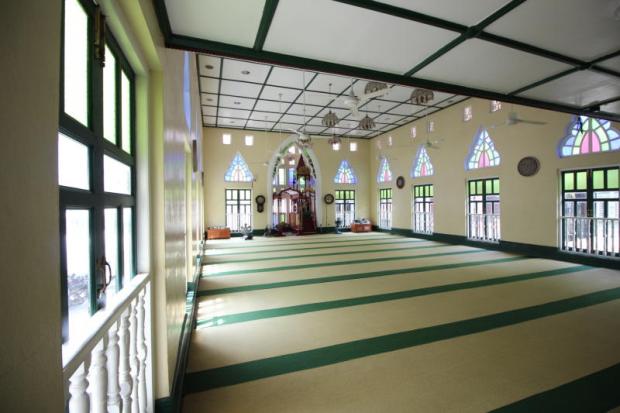 Inside the hall of Chakrabongse Mosque. 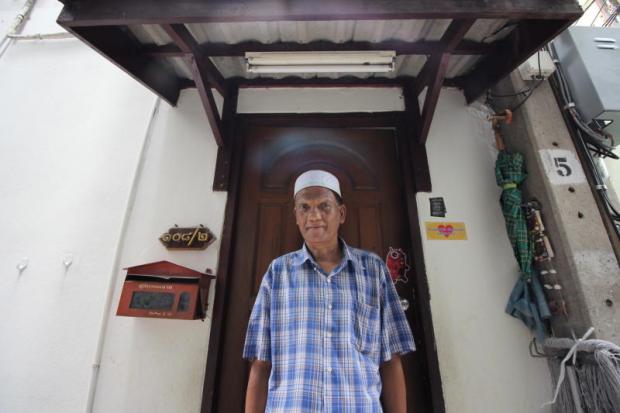 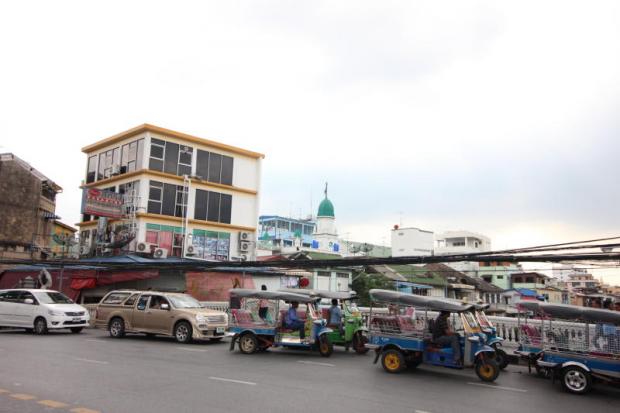 A view of Mahanak Mosque, with its green dome, from a nearby canal bridge.