Spores to the fore

As the rainy season finishes, a prized mushroom emerges from termite nests deep in the jungle.

If the weather doesn’t pull any surprises over the next week or so, people who feel a seasonal craving for the mushroom called het khone — the “termite mushroom” — should get some money ready and head off to buy some at a special place they’ve heard of or maybe visited before.

Het khone are different from any other mushroom in the world. Their existence is tightly interwound with the life cycle of termites, with weather conditions and with the natural environment. These different factors align in a way that allows the mushrooms to appear only once a year.

Termites are dangerous insects that most people dread. They are smaller than a match head, but if they join forces they form an army that can destroy an entire house in a month. They usually make their nests deep underground, not only under the foundations of houses. In a nest there will be a queen whose only function is to replenish and increase the population, while duties like constructing or enlarging the nest and finding food are performed by the other termites. Some are assigned to go outside to find and bring back small scraps of wood, which gradually collect inside.

These pieces of wood are gathered together in the nest, where a combination of warmth and humidity germinates spores to form fungus that produces the sugar that the termites gather as their food. If the nest has a large population, the quantity of wood will be large, too, because there will have to be enough food to feed the entire nest.

The end of the rainy season comes during October, when there is a lot of rain interrupted by intervals where no rain falls for days. Then, in the last days of October, at the end of Buddhist Lent, there will be a longer dry spell during which the weather is oppressively hot. Villagers call this weather rawn het, or “mushroom heat”. It will be followed by a rainstorm of cloudburst proportions that turns the ground to mud.

In the predawn darkness of the following morning local people head out into the forest, equipped with torches and knives for scraping away soil. If the torch beam reveals some het khone mushrooms, they are immediately dug out. The ones whose caps have not yet opened are considered to be just right for gathering.

The reasons the mushrooms appear at this time is that this is the period when termites sprout wings and become the flying insects called malaeng mao in Thai. They emerge from the nest and fly off to mate. If it rains, they perish, if not they fly everywhere, swarming around lights and eventually falling to the ground where they become the food of insect-eating animals.

Almost none survive to return to the nest. During the period when no rain falls the heat and humidity inside the nest increases, causing the spores to grow into mushrooms, which burst through the surface of the softened ground when the heavy rain finally falls. This is the unusual origin of the termite mushroom, which gets its deliciously sweet flavour from the sugar stored by the ants.

Het khone are found everywhere, but are at their most plentiful in forests near the bases of mountains where there are toppled dead trees covered with fallen leaves and the layer of soil is not too thick.

Locales like this can be found in Kanchanaburi and western Phetchaburi, where there is a long chain of mountains. This is an extensive area, where periods of rain and dry come at different times, so the mushrooms are always appearing during the season.

Het khone should not be stir-fried or deep-fried, and should not be cooked together with other ingredients or with seasonings, as this will prevent their natural flavour from coming through. The best way to prepare them is as a tom yam with no meat of any kind added, or by steaming them in a little bit of water. The steamed mushrooms are eaten with a little bowl of dipping sauce made from sliced shallots, chopped phrik khee nuu, lime and fish sauce. Nothing else is needed.

Thais have been eating het khone for a long time, although primarily in the Central region and most of all in Bangkok. In the past there were no other mushrooms to choose from.

People in the South and in Isan had the advantage of a variety of different types, including het khone. The ones there appeared at a different time, however, bursting from the termites’ nests at the beginning of May, during the early part of the rainy season, when the same dry kind of spell followed by heavy rain brought them out. The Isan termite mushrooms had a disadvantage, however, because the fine sand that lies beneath the surface soil in that part of the country made its way into their flesh.

Nowadays people in the Central region no longer have to fret about limited mushroom options, because many varieties are cultivated commercially at farms of all sizes. Besides these types, others are imported from China, and prices are low.

As people in the Central region and Bangkok became familiar with different types of mushroom, recipes appeared that made full use of them.

So as the end of the rainy season comes around again, those who know how to enjoy a choice mushroom will rush off to a place where they can be sure the local people have been out gathering them before dawn, because they won’t find good, fresh ones in any market.

The mushrooms will be expensive, and they will have to be washed and cooked once they have been brought back home. In Bangkok there are not many people ready to undertake these mushroom-hunting excursions, but those who do can count on enjoying one of the treasures of Thailand’s cuisine. 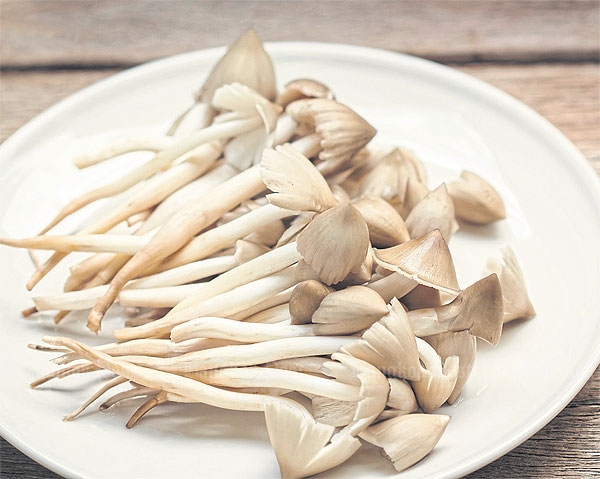 Fabulous fungi: Het khone is known as the king of Thai mushrooms.