Pleasure at the fairground

Forget hazardous flying lanterns of the North. This Loy Krathong Festival, make your way to the old-school ngan wat, or temple fair, and while many temples around the country have put up fairgrounds to celebrate the Full Moon night of the 12th lunar month, none can beat Bangkok's oldest and most legendary ngan wat Phu Khao Thong.

The Golden Mount temple fair, at Wat Saket in the old quarters, dates back to the origins of Bangkok itself, and every year it is a carnivalesque congregation of food, fun, noise, plus plenty of quirky and eccentric flair.

The peak night is tomorrow, when people will immerse krathongs in all water sources available throughout the country. At Wat Saket, the highlight is the vast fairground and market that surrounds the temple grounds for 10 days, which ends on Friday. Street food is scrumptious and comes in a full range from pad Thai to deep-fried insects. But the real crowd pleasers are classic attractions like chingcha sawan (a rusty Ferris wheel), sao noi tok nam (a dunking booth featuring scantily clad girls), shooting galleries, haunted houses and freak shows.

Going to the temple fair at Wat Saket has always been about reliving nostalgic moments of our childhood; it is also an unpretentious, inexpensive and homely party of people of all classes. Times have changed, and we may use smartphones to take photos instead of film cameras, but these iconic attractions at the Golden Mount seem to be frozen in time. No matter what changes, the old-school appeal remains the same.

Moo -- operator of the Yuenyong Panich company's chingcha sawan -- and his family have been in the fair ride business for close to 70 years. Moo took over the Ferris wheel trade after his father passed away. He now sits at his desk at the front, selling rides for 30 baht. Everyone gets five or six spins per ride.

Chingcha sawan, in Thai, means "heaven's swing", and no one minds the rusty wheel. "Some people may opt for new stuff now, like the octopus rides and all. But this is a classic ride. And most people still love it, even after all these years," said Moo, who still remembers when tickets used to cost 1 baht. Aside from chingcha sawan, Moo owns carousels, balloon houses and dodgems. They, however, are too big for the space at Wat Saket, and are not included at the temple fair.

A woman who was waiting her turn to ride the chingcha sawan said she was not scared of it. She didn't appear to be concerned for her safety. Strangely enough, while many complain of these rides being unsafe, there has never been any news of a mishap. Perhaps the Ferris wheel is better maintained than it looks.

Not too far away, Uncle Ooht dares passersby to enter his haunted house, "Baan Phee Phop", named after a famous Thai comedic ghost film. Baan Phee Pop was screened in 1989 and to date, there are 14 instalments of the series. They all tell a story of Phee Pop -- a cannibalistic female spirit from Thai folklore that feeds on human guts -- who caused mayhem in a rural village.

But Ooht's Baan Phee Pop has no giant water jar -- the film's iconic spot for hiding from a ghost. Instead, after we step past a black curtain, darkness engulfs us. We are basked with a purple glow of black light. The wall lining is sprinkled with glow-in-the-dark paint and plastic skeletons dot the interior. People dressed up as ghosts jump out from different corners trying to spook people, who have paid 20 baht for the experience. About a minute later, we emerge from the haunted house, feeling unsure if we've been frightened or amused. Where was Phee Pop?

"People are surprised that we are still operating. They see us here every year. Their fathers have brought them, and now they bring their kids," Ooht laughed. He said the characters inside and themes often changed based on current trends. Apparently, Phee Pop is still alive and well in 2015.

Ooht has been in this business for more than two decades, and finds nothing strange with setting up a haunted house on the temple grounds. He has another haunted house in Surin province in the Northeast.

The Golden Mount temple fair is his annual pilgrimage to the capital. All the "ghosts" inside are his relatives.

Many attractions at this fair seem to ride on family members putting on a show together. Freak show operator Kanchana Samranjit brought along her young relatives -- as well as a python called Junior -- to help out.

Freak shows -- a carnival-style exhibition of strange creatures, all fake -- have long been a highlight of Phukhao Thong, said Kanchana. She is now 50, and has been part of her father's business since she was four. Before, she performed as a "Snake Child". Now, she operates the show, and has passed on the baton -- and a snake -- to her niece, 17-year-old Champagne, who runs a section as mia ngu -- or "Snake Wife".

In her small space, Champagne drapes the python over her body, whether she stands or lays sprawled on the ground. Junior the Python appears very tame, even allowing people to pet him. The girl said her python feeds on raw chicken.

This is Champagne's second time performing at the Golden Mount. She lives in Phetchaburi province and is studying in non-formal education. "I want to save money for college. I don't want to put the burden on my parents," said Champagne.

Kanchana's freak show travels to different fairs around the country. She likes calling upon her relatives to help out as they're more adept compared to outsiders. While mia ngu is the star of this year's freak show, Kanchana said she has more to offer. Other options include a mermaid and kra sue -- a female ghost who floats around with dangling intestines.

"We rather focus on the diversity and uniqueness of each show. But some competitors just bring on nudity and loud noises to lure people in," said Kanchana.

Out of all the attractions around Wat Saket, nothing seems to draw a bigger crowd than the dunking booth sao noi tok nam -- which literally means "young girls falling into water". The sight of people (mostly men) throwing plastic balls at the marker, trying to get girls in skimpy clothes to fall into their water tanks -- and the laughter that emits when they succeed -- would send any feminist into a flying rage.

The girls sit emotionless on a raised platform inside their individual tanks. Every other minute, someone hits the marker and one girl falls into her tank of water. The girls do this over and over again, eyes bloodshot from the water. And the laughter and cheers continue with remixed dance songs pumping in the background.

"It's fun to throw the ball. People really want to get even when they can't get the girls to fall into the water," said Duangporn Khanachan, who works at the dunking booth. She used to be one of the girls waiting to be dunked, but now sells plastic balls to people instead. For 20 baht, we get five chances.

Business at the temple fair has been pretty good, said Duangporn, but the rise in rental fees has put the crew off a little. This year, the Golden Mount increased rental fees to 20,000 baht for 10 days, from 10,000-plus baht last year.

Still, this 40-year-old dunking booth business continues to fare well, according to Duangporn. As a staff member, she earns around 400 baht each night. She lives in Samut Prakan province, where she works for a local shrimp farm.

The Wat Saket temple fair runs from 5pm to midnight, until Friday. 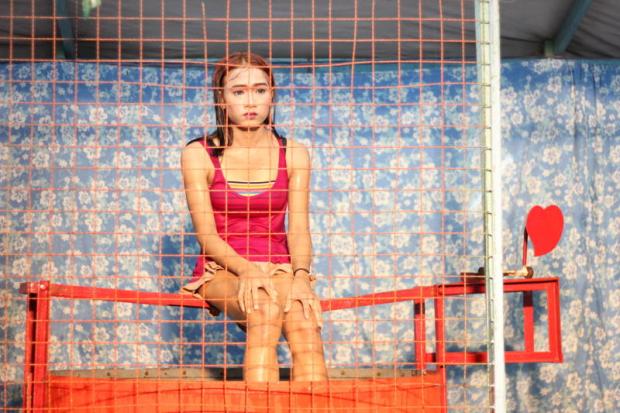 For 20 baht, each player gets five turns at trying to dunk a girl. 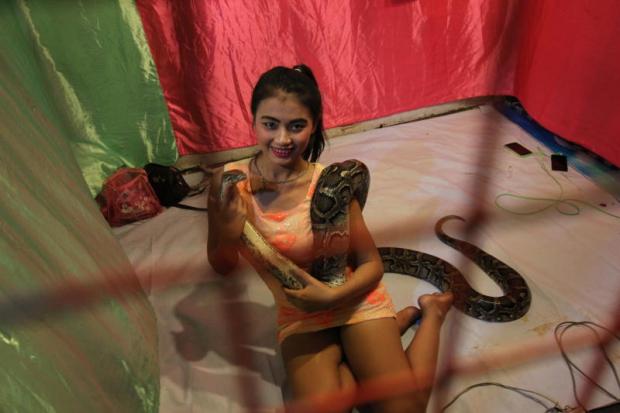 Champagne, 17, with her python Junior. 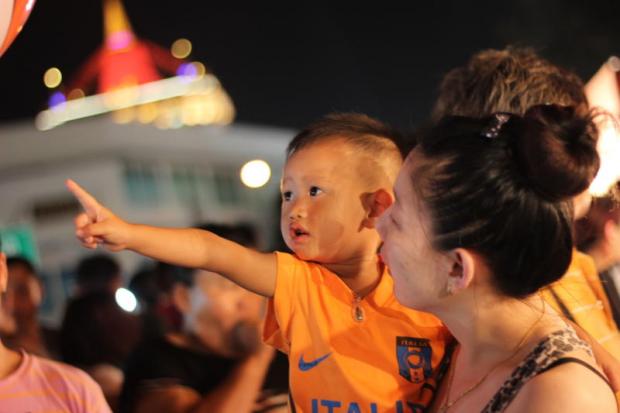 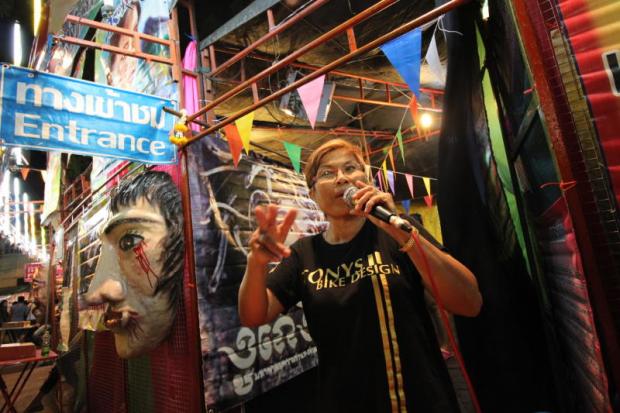 Kanchana calls for people to visit her freak show.