Fish for a compliment

Next week's Pla­ Thu Festival is a reminder of how delicious, yet potentially at risk, the popular catch is

When talking about Thai pla thu (better known around the world as short mackerel), it's difficult not to mention the famous catches of Mae Klong in Muang district of Samut Songkhram province.

At this time of year, the Mae Klong market is lined from one side to the other with merchants selling freshly-caught pla thu in all shapes and sizes. Especially with the Pla­ Thu Festival, which will take place from Dec 17-27, local gourmands are looking forward to tasting the fish prepared in both traditional and modern techniques.

Held under this year's theme of "Queen of Tastiness", referring to the local nickname for the pla thu, the 10-day feast will feature a host of seafood merchants selling their pla thu, with more than 50 different dishes prepared with fish.

November and December is considered the best time to enjoy pla thu, according to locals, as the fish accumulates an extra layer of fat in preparation for the winter.

"Every year in December, pla thu migrate back to the Gulf of Thailand to lay their eggs. It's like a seasonal event for the province. We even get foreign tour groups dropping in to buy our famous pla thu," said Noi Wiriyapong, a long-time pla thu merchant of the Mae Klong market.

Situated on the geological sweet spot where fresh, salt and brackish waters from the Tha Chin River and the Gulf of Thailand come together, Mae Klong's waters are extremely rich in nutritious plankton, which are the main food source for the area's pla thu.

The ideal environmental conditions are the main contributors to the tender meat of the pla thu, as well as its signature sweet, savoury taste.

The conditions also give Mae Klong's pla thu their uniquely small, chubby bodies and yellowish hue on their upper fins; physical traits that aren't present in pla thu from other areas.

According to locals, the small, yellowfin variety is the signature of Mae Klong harvest, while the lately-marketed bigger, bluefin counterparts are generally caught elsewhere such as India or Indonesia.

"More and more people come to buy pla thu each year, especially during the holiday season. As Mae Klong's pla thu continues to gain more and more attention, we get more tourists who buy pla thu as gifts," Noi said.

While the locals of Mae Klong continue to benefit from the influx of people who are drawn to their famous pla thu, the truth is that most pla thu sold in this particular vicinity is actually taken from the netting boats of the neighbouring Maha Chai. As a result, the price of pla thu has also risen in recent years.

"The last couple of years have seen a sharp drop in the number of pla thu around Mae Klong," said Suri Thosakul, a local fisherman.

"The water in the area has been warmer than it should be, which stunts the growth of pla thu in those waters. Most of the pla thu you see in the markets these days are bought from the netting boats in Maha Chai," she explained.

This hasn't, however, diminished the people of Mae Klong's appreciation for this tasty little fish. Therefore, the upcoming 18th Pla Thu Festival expects to see a lot of pla thu -- fresh and writhing. Visitors can get them pre-cooked in the traditional ways, which are steamed in bamboo baskets, baked with sesame seeds and sugar, or simply deboned and sun-dried.

While the barely-living variety is generally fresher and can be self-grilled, the pre-cooked variety is the more popular choice among tourists, as they can be kept outside a refrigerator for far longer than the uncooked ones.

The traditional steamed or sun-dried variety is available, alongside more outlandish dishes available only during the festival, like the pla thu sukiyaki, steamed buns with pla thu filling, pla thu toast and, most famously, the pla thu burger, made from 100% pla thu meat. The dishes are also cheap, selling for 30-40 baht per dish.

"We wanted to offer something a little different from the usual. And after much consideration, we decided to make a pla thu burger, as we thought it would appeal to younger festivalgoers," he said.

The restaurateur who created the idea of the pla thu burger, which has now become one of the must-try attractions of Samut Songkhram, explained that he used shredded pla thu mixed with a variety of herbs as the patty, to make it healthier.

While not nearly as internationally famous as tom yum or pad Thai, few people can dispute pla thu's position as a staple in Thai cuisine.

Whether you like your pla thu steamed, grilled, deep-fried or sun-dried, eaten with assorted vegetables or chilli paste and sticky rice, these stumpy, chubby little fish have fed Thai people for generations, and will surely continue to do so for a long time yet.

The preference for small pla thu has become ingrained as part of Thai culinary culture. Thais are instilled to believe that small pla thu — short mackerel, the de facto National Fish of Thailand in terms of popularity — is tastier, with a meat that is more succulent.

Understandably, the belief comes from the popularity of pla thu from Mae Klong of Samut Songkhram, a fishing hub in the inner Gulf of Thailand, which are relatively smaller than those caught in Andaman and deep sea. Deep and strong tides in the Andaman and other deep seas require mackerel to swim. As a result, these fish tend to be larger in size and the meat is tough.

But what exactly is the definition of "small"? How small should the pla thu on our plates be? This trivial question deserves an answer as the craving of smaller sizes — along with the accompanying innovative fish snack gimmick — leads to the unsustainable consumption of juvenile fish, which should be spared to continue breeding and to replenish fish stocks.

Pla thu jiw (sun-dried mackerel) has become a famous souvenir from Prachuap Khiri Khan province. A kilogramme of the snack contains around 1,000 baby mackerel and costs only 100 baht. Baby mackerels are shorter than a length of an average person's palm, or, even worse, the size of a pinky finger.

The standard size of pla thu for consumption should be 16cm in length, or around 12 fish per kilogramme, which should cost around 100-120 baht.

"Those who love to eat small pla thu are eating fish that should be spared and consumed by future generations. It is such a huge economic loss. But worse is that this trend wreaks havoc to this species," says Supaporn Anuchiracheeva, fishery expert and conservationist at the Earth Net Foundation.

Stocks of pla thu are dropping as the fish are caught to serve as materials for animal feed and human consumption.

As Thailand takes pride in its delicious pla thu, the reality is that we are a leading export market of mackerel from neighbouring countries, such as Indonesia. In the future, Thais might have to eat pla thu raised in captivity. Last August, the Royal Fishery Department succeeded in breeding pla thu — once only wild-caught fish — in captivity for the first time. 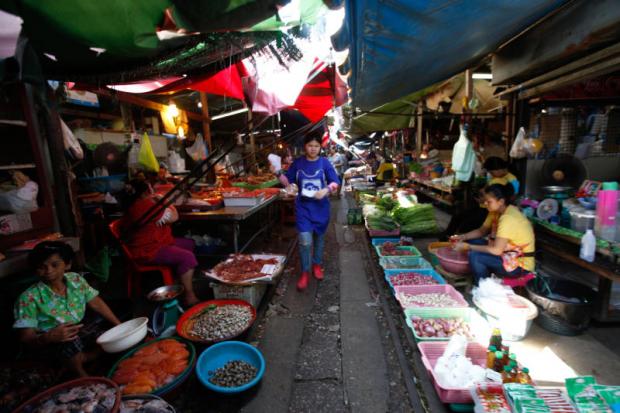 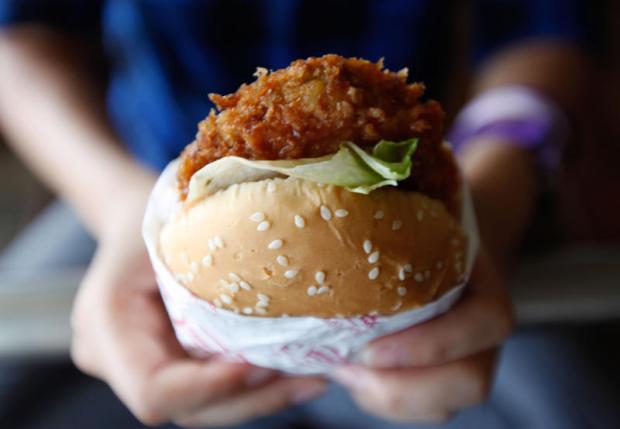 Grilled pla thu with a side of fresh herbs and sweetened fish sauce.