The force is strong with this one
Life
Social & Lifestyle

The force is strong with this one

This Thursday, the sequel of Star Wars will monopolise cinemas around the world. According to most predictions by box office pundits, the space opera conceived nearly 40 years ago will be the year's biggest blockbuster, not to mention a perpetuation of one of pop culture's greatest mythologies. 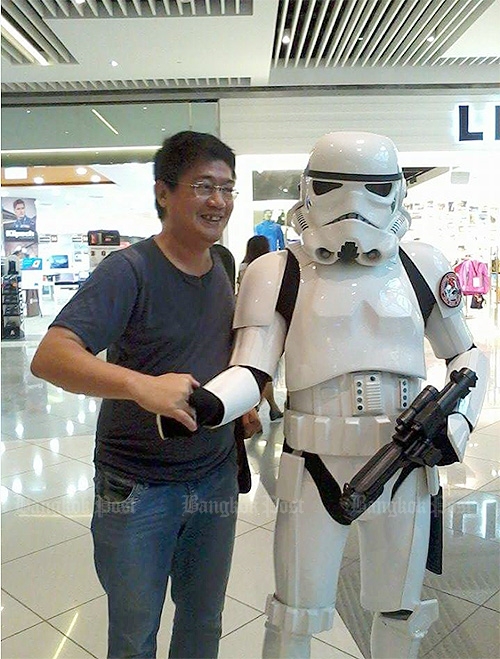 Spectators of 2015 are likely to pack the 800 screens in Thailand to watch The Force Awakens, and that is a starkly different fate to the franchise from 38 years ago. The strange story of how the original 1977 Star Wars almost didn't make it to Thai cinemas is one that is largely forgotten -- a story that concerns international trade law, bizarre piracy, interventions by the US embassy, a Bangkok Post op-ed piece criticising the Thai government and chaos at the ticket office of the Lido that required the presence of the Crime Suppression Division. It is also a story of movie love and cultural imagination inspired by the might of American films.

George Lucas's Star Wars was released in the US in May 1977 and became a phenomenon. But that year the Thai government, in a bid to protect the local film industry from foreign products, hiked up the import tax on 35mm film (film existed in rolls then, not the digital hard disk of today). The tax increase was outrageous -- from 2.2 baht per metre to 30 baht per metre, or a 1,300% surge. As a consequence, from 1977 to the early 1980s Hollywood studios boycotted the exorbitant duty and no American films made it to Thai cinemas. The first episode of Star Wars was one of the casualties.

"But Thai people heard about Luke Skywalker and Darth Vader from news and magazines," said Manotham Theamtheabrat, a bank employee and respected film critic. "I was a secondary school student and I read about Star Wars and was fascinated by the story and the characters R2D2, C3PO and all that. But in 1977 the film didn't open here." 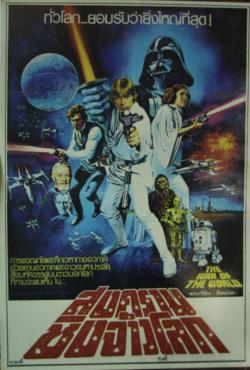 Bootleggers renamed Star Wars as The War of the World in the late 1970s. Courtesy of Santi Tantipuntarux.

The force, even then, was too strong to resist. The late 1970s was when VHS tapes began to revolutionise the film-viewing experience -- and also film piracy. Bootlegged tapes of Star Wars trickled into the country, though in a small number and also at an inflated price since a VDO player then cost almost 100,000 baht.

Still, that was the time when people still believed in seeing films on the big screen, which led to the mother of all piracy rackets. Contraband film reels of the space saga made their way from Malaysia into Thailand, and cinemas in the Southern began showing Star Wars, but not as Star Wars though -- the title was arbitrarily changed to The War Of The World, the new name printed onto the film posters with Luke, Leia and Han Solo. (Not to be confused with the 1953 The War Of The Worlds).

"That was how Thai people first knew Star Wars, as The War Of The World," said Santi Tantipuntarux, a movie poster collector and dealer who runs his shop under Lido Theatre. "The posters with that title are now rare items."

Perhaps because of the popularity of the film, and also because of the threat of piracy, the US embassy and the Motion Picture Exporters Association of America decided to step in. On Nov 30, 1979 -- two years and six months after Star Wars was released in the US -- the embassy hosted a charity screening of Star Wars (as Star Wars of course) at Lido in Siam Square.

Another film shown that day was The Spy Who Loved Me, with Roger Moore as James Bond, which was another film in great demand. It would be a one-time event -- only two screenings of Star Wars and three screenings of the Bond film.

In the week before the show date, there were movie ads in the Bangkok Post announcing the event. The ads came with the text -- how could there not be -- "A long time ago in a galaxy far, far way", and also "All proceeds go to Thai charities".

Manotham, the film critic, was there at the maiden screening. The Empire Strikes Back opened in Bangkok in 1982, two years after the US.

"The ticket cost a lot of money and I couldn't believe my luck," he recalls. "I sometimes stashed the cash my father had sent me in books and magazines. I went and flipped through them and found a 500 baht note. Finally, I was going to see Star Wars!"

It was a Friday, Manotham clearly remembers, and he was one of the lucky people who got a ticket, because there was a mob at the Lido box office, even though the venue was then an 800-seat cinema and not the trio of small auditoriums that it is today.

The next morning, Dec 1, the front page of the Bangkok Post came with the headline "Thousands in ticket scramble", with a photo of the scrum. The story reported that "several thousand people" clamoured for limited seats. Some had queued up since 6am, and many of them felt "agonising frustration… the atmosphere frayed the nerves of some of the fans, particularly when news got around that some individuals were buying tickets by the dozen".

Eventually, the report said, "Crime Suppression Division police had to be called in to break up a brawl".

Back then, it seemed people would go to any length to watch a film, or to watch Star Wars. What happened was more than just a collective passion of film-starved Thais in the late 1970s; it was also a case of cultural management in the pre-free trade era. The Bangkok Post that day devoted its editorial to the incident at Lido and slammed the government for its prohibitive import tax policy.

"The overall loser is the general public, many of whom find the cinema the only respectable place of entertainment," it claimed. The op-ed called for the loosening of the sky-high duty, a move advocated by the then-prime minister Kriangsak Chomanan.

And as the 1980s rolled in, the government slowly relaxed the import tax, and more American films made it to local cinemas. In November 1981, Star Wars was finally released as a film in several cinemas -- over four years after its US release. Manotham, a devoted fan, said he watched the film so many times at different cinemas around Bangkok "just to get the feeling of it". Return of the Jedi opened in Bangkok in 1983, five months after the US. The posters are courtesy of Santi Tantipuntarux.

In April 1982, Star Wars: The Empire Strikes Back opened in Thailand, two years after its 1980 release in the US. The gap got narrower when in October 1983, Star Wars: Return Of The Jedi opened here five months after the US.

How times and global economics of cinema have changed. When Star Wars: The Force Awakens opens in Thailand this Thursday, our release will be hours before its US release. Thai viewers need not brawl their way to the box office as they did in 1979; in fact we'll even get to see the film before the Americans.

"I think Star Wars talks to the child in all of us," said Manotham, who's in his early 50s. "It is all about the 'forever-young' sentiment. When I was young I thought I was the only one who was crazy about Star Wars, but when I grew up I found that so many of my friends shared the same feeling."

"Star Wars talks to three generations -- the 1977 original, the 1999 Episode I reboot, and now the latest sequel," said Santi, the poster man. "I have to stock the posters of the film, vintage and new, small and big, because there's always the demand. And because for fans, it's a mark of dignity to have Star Wars in your collection." 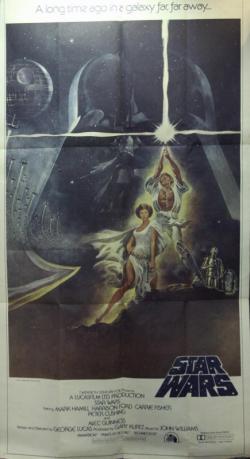 The original poster of George Lucas's 1977 Star Wars (from the collection of Santi Tantipuntarux). The front page of the Bangkok Post on Dec 1, 1979, reported a scrum at Lido after several thousand people scrambled to get tickets for a special screening of Star Wars and The Spy Who Loved Me. 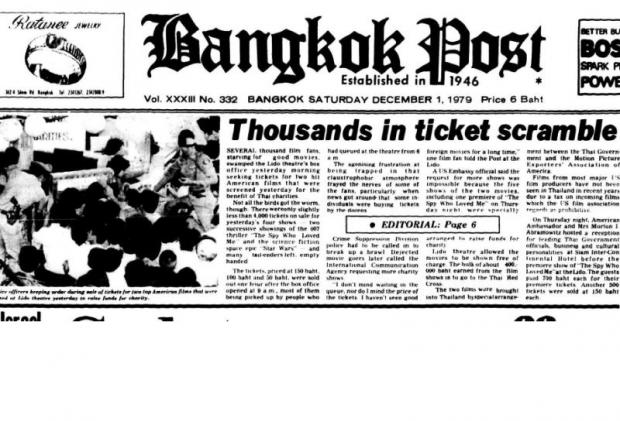 The front page of the Bangkok Post on Dec 1, 1979, reported a melee at Lido after several thousand people scrambled to get tickets for a special screening of Star Wars and The Spy Who Loved Me. 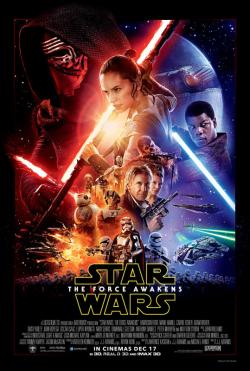