Bird on a wire

Kawita Vatanajyankur feels like an outsider wherever she is. In Melbourne, where the 28-year-old artist spent a decade through high school and university, it wasn’t really home. Back in Bangkok for four years now, and she doesn’t feel Thai, either. Who she is as an artist and the person she is as she sits down for an interview are equally in a state of flux.

While in her video works Kawita plays the satirical performance artist, throwing herself into a series of tests — from precariously hanging from a drying rack as if she were clothes to turning herself into a broom — the "Kawita" in person, however, is elegant in a  ladylike dress with high heels. She could be easily mistaken for a khun noo, or a socialite.

What’s increasingly definite, however, is her presence in Thailand’s art scene. After a solo show “Tools” at The Jam Factory Gallery, which ended last week, her video works are still on display as part of a group show “Super Nature” at YenarkART Villa art gallery. Kawita was also among a group of Thai artists selected to feature in the “Thailand Eye” exhibition at Saatchi Gallery in London last year before travelling back to Bangkok Art and Culture Centre (BACC) in March. Her other notable role is a founder and curator of Ferry Gallery, a ferry at Tha Tien Pier displaying rotating exhibitions to the commuters crossing the Chao Phraya River.

“I never choreograph. I just have some sort of hypothesis and start finding out what really happens with video recording,” said Kawita of her video art. Reminiscent of Marina Abramović, but a more playful and cheekier version, she stars as a performance artist herself in all of her recent video works.

In 2013's The Ice Shaver, which was shown at The Jam Factory Gallery, Kawita presses her face hard into a block of ice and pushes back and forth against a shaver underneath. In The Scale which is soon to be seen at BACC, she is doing a shoulder stand with a basket balanced on her feet, receiving a torrent of water melon slices falling from above. 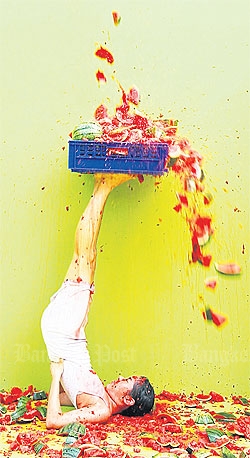 “With pieces like The Ice Shaver, I was meditating, trying to transform myself into something else that’s not me, an object,” said Kawita. “It came from an idea about sickness and pain, I thought perhaps all these feelings were all made-up and if we persevere long enough, maybe these pains and feelings will be gone.”

Kawita’s artistic career started out with photography and most importantly, the time spent with her late father. Even as a child, her father, who was creative, always shared ideas on projects and artworks he was working on with her. He always took her to the movies and they communicated with one another through the films watched together. While in Australia, her dad would come visit every weekend and took her travelling to various tourist spots.

“We went to the sea, into the woods, going on long drives and stopping at motels along the way,” said Kawita. “I had always painted but I always took my camera with me on those trips. I love just the medium, the act of creating composition and pressing the shutter button.”

Kawita studied art during high school and it was around that time when photography was no longer just a tool for documenting her experiences but also as a means to make sense of her life in a foreign country. Her early video works reflected that. At one time, she would float herself in a shipping box and had tourists film her while she was being washed ashore. For another piece of work, she shut herself in a box left in the desert before trying to break out.

The real significant shift in her life was when her father died of cancer when she was just 18 years old.

“He had always been the person I could share everything with,” said Kawita. “Without him, I was thinking and doing things alone. This was the point where I started watching a lot of movies in the hope that somehow I could meet that friend and have that type of relationship again.”

Growing up alone, it’s films which have raised and taught her what’s right or wrong. Shutting herself in a dark room and watching films alone became not just a habit but a turning point in her life. 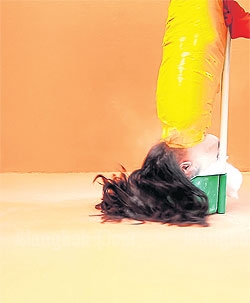 Kawita is into films that are rather “psychopathic” like Stanley Kubrick’s The Shining or Michael Haneke’s Funny Games, the type of film which she said can help her understand other people more. Her fascination with films in general is with the fact that this medium has the power to control and play with the audience.

Kawita’s video works have that power too, but function in a playful and at times more meditative approach. In The Dustpan, we see her head hung upside down and swept back and forth obviously as a broom against the dustpan. We watch it with mixed emotions, alarmed that she might get hurt and at the same time amused by her take on the stereotyped expectation of Thai women when it comes to household chores.

“I’m interested in the communication between those who make the videos and those who watch them,” said Kawita. “In terms of video art, it’s the suspense which the viewers and I go through together in those couple of minutes, what’s going to happen and will something fall and hit my face? I know that now but I didn’t know it then. Everything was real and the video is the evidence.”

Watching Kawita’s video works from afar, thanks to their slow pace and colourfully composed background set-up, many might initially think they're paintings on canvas. This is actually how Kawita meant her work to be. Her major at RMIT University’s Fine Art Department was in painting yet during her university years she never laid hands on brushes and canvases like everyone else. She paints through her performance, set-up design and composition.

“My video works are very two-dimensional,” said Kawita. “I like the colours, the composition aspect of a painting. The works are just like paintings hanging on the wall but with a bit of movement.” 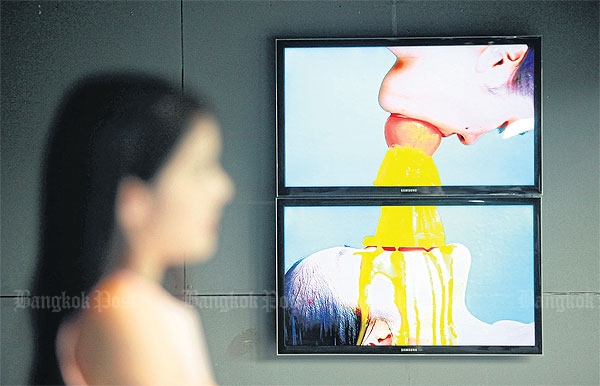 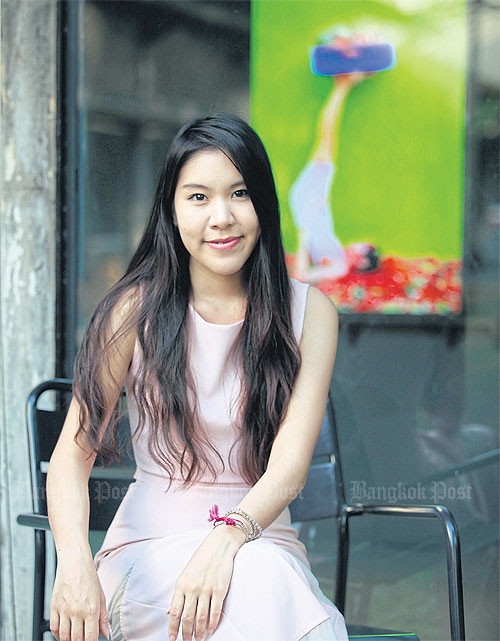