A hollow belief or a sacred object, the trend for collecting luk thep is sweeping the nation

"It's something that society should decide if it's real or not," said Gen Prayut. "It's a belief. But I don't know whether it's a sustainable one."

What the prime minister was referring to is the trend that has taken the country's soft spot for superstition to the next level: luk thep, or "angel child" dolls. These reborn dolls are believed to possess supernatural powers that have been gained through a process of blessing and incantation. The lifelike dolls, which are dressed like children in beautiful clothes and lovely hairdos, are believed to bring good luck to their owners, or in this case "parents", who have now gone out of their way to make sure that their stuffed children are coddled and cosseted, from dressing them up to securing seats in restaurants and aeroplanes for them.

It has been a frenzied week for the dolls, their parents, and observers. Though the phenomenon took off last year, on Saturday Thai Smile, a subsidiary under Thai Airways International, made a startling announcement allowing passengers to purchase seats for their dolls. Bloomberg also reported on the airline's decision on Monday. Scores of hospitality businesses have followed suit and taken turns in promoting themselves as angel child doll-friendly. A number of restaurants have launched special deals for those who wish to dine with their dolls, while tutorial schools and nurseries are offering private sessions for those who see investing in education for these vinyl-skinned kids as worthwhile. On Monday, a monk in Nonthaburi was photographed while performing a mass blessing of the dolls, sprinkling them with holy water and allegedly putting sacred spirits in them.

What remains more mystifying is where the dolls actually come from.

Among the many people who claim to be the originator of angel child dolls is 49-year-old Mananya Boonme, who has worked as a fortune-teller, a medium and a vessel for a "goddess" for more than a decade. Having a penchant for dolls since she was young, she was prompted to bring one to life through her self-taught magic, in the hopes of using it as a tool to keep her headstrong son disciplined. The success the doll apparently brought encouraged her to treat it with more affection, almost as if she was her daughter. She now calls her "Nong Petch".

"I started by giving her a shower," Mananya said. "Then one day she appeared in my dream and told me she was going to help me earn money. I took her to ride a carousel at a theme park, then she was seen and asked to be on a television programme. After that, more and more television programmes came to us."

Before long, Mananya was approached by a number of faithful followers whom she refers to as her "students".

With word of mouth, what started off as a rather small coterie turned into a popular and flourishing business. Now, her house in Nonthaburi has been transformed into a showroom and factory filled with hundreds of dolls, welcoming people who come from all over the country. The price for dolls goes from 1,999 baht to 30,000 baht, incantation included. The first step is for customers to select a style of doll, all of which are stuffed with "special objects" instead of grain, as she had to quit using it after the process became overly imitated. The most important part of the process takes place upstairs. Details of which, however, Mananya is unable to share, as this is what her makes her angel child dolls different to others'.

"I make them with my mind," Mananya said. "They come from my imagination. Whether or not a doll is special is entirely up to the person who makes it."

One of the celebrities claiming to have become a "parent" of a doll after Mananya performed her magic is Thanachapan "Bookko" Buranacheewawilai. A well-known DJ, Thanachapan recounted in an interview that he at first didn't believe in the power of the doll, but kept one out of curiosity. But then he wanted to test it by making a wish about a job opportunity, vowing that he would believe in the power of the doll if it gave him good luck. He got the job. Not convinced, he tried the same process again with another job and he got a job offer again. "At first I thought it was a coincidence," he said. "But I tried it a few times, and when it kept happening, I believed it was the doll."

If you go to childsangel.com, you can choose from a vast catalogue of "imported" angel child dolls, most of them look European and many are dressed like princesses, with prices that range from a few thousand baht to over 10,000 baht.

The website also has a blessing service, the process that turns dolls into sacred objects. "We're glad that Thai Smile is now accepting our little cuties as passengers now!" a message on the website says.

Some observers compare the phenomenon of the good-looking luk thep with the more traditional, and more eerie, kuman thong -- "ghost child" dolls blessed by shamans or sorcerers that have supernatural powers. While kuman thong is associated with rural beliefs and ancient mysticism, luk thep is more urban and middle-class in nature.

Baan Luk Thep is another house of dolls that is doing brisk business. The owner, known as Mr King, said that the dolls are not kuman thong. "Kuman thong is blessed by black magic, and some houses do that to luk thep," he said in an interview for sanook.com. "But it's wrong. Luk thep are fed by good deeds.

"Those who keep them have to make merit and perform good things to please the children. It's a strategy to convince people to do good."

However, there are also many people who remain sceptical and have been pouring scorn over the phenomenon. Mananya, one of the early believers, doesn't concern herself with such matters.

"Normally the people who speak ill of this are people who don't have anything better to do with their lives," Mananya said. "They would say that these are ghost dolls. We have never done anything to hurt anyone or take their money. It's not illegal. It's a good thing, not a bad thing."

Believing it's her right to believe is Pantira*, a 37-year-old housewife who has a seven-year-old daughter. Apart from her human daughter, she has another two daughters, named Angel and Sofia, which she has been carrying around with her, shopping and running errands, for over a year. They have their own crib and she likes to feed them Pocky chocolate sticks.

"It's a personal right and I choose to believe it a lot," Pantira said. "For me, I have enough reason to believe. I'm not over the top. I can afford it."

Angel was a forgotten doll from her childhood, while Sofia was found at a garage sale in England. One day, while reminiscing on the plot for Toy Story, where toys are abandoned by their grown-up owners, she felt bad for the dolls' fate and decided to give them a facelift. This was the same time that angel child dolls emerged, so being curious, Pantira took her dolls to an incantation house.

"Sometimes when I give them food, the food doesn't come into contact with their mouths but their mouths look dirty," Pantira said. "I was like, 'Whoa, who gave you that food?'." The trend for angel child dolls has also helped resurrect the doll business in general. Since the trend began, Pairoj Dechdoon, the owner of a shop that sells and fixes curios and old dolls, has seen an unprecedented number of customers. He now fills his shop, located on the sixth floor of Pantip Plaza Ngamwongwan, which is now home to more than 10 shops dedicated to angel child dolls, with accessories such as shoes, hair conditioner and bracelets for the dolls. His shop also sells angel child dolls but doesn't provide an incantation service.

Pairoj, who thinks that regular dolls have a deeper and richer history than that of angel child dolls, also collects many dolls himself because he said they soften his masculinity. However, he believes that the only ones who are able to bring them to life are monks.

He said that he had just sold a Chucky doll to a customer for 13,000 baht who said he was going to have it incanted. He told Life that he wonders how it will turn out.

Asked if a Buzz Lightyear doll, which was also on sale at his shop, could be turned into something sacred, he answered: "I'm not sure. I have never seen a person who wants to do that. The thing is that they still want something that looks like real babies. I think there's a possibility though." 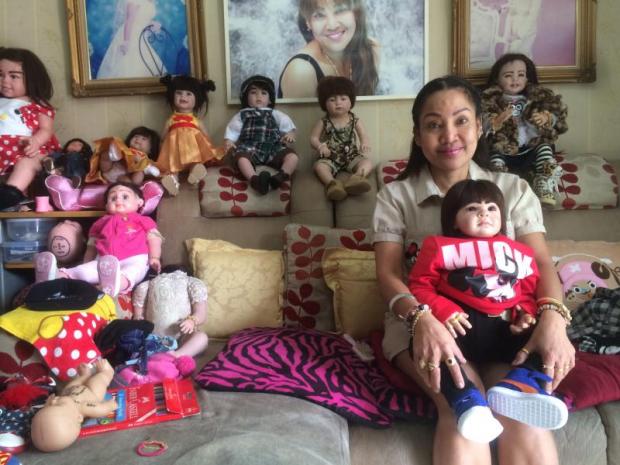 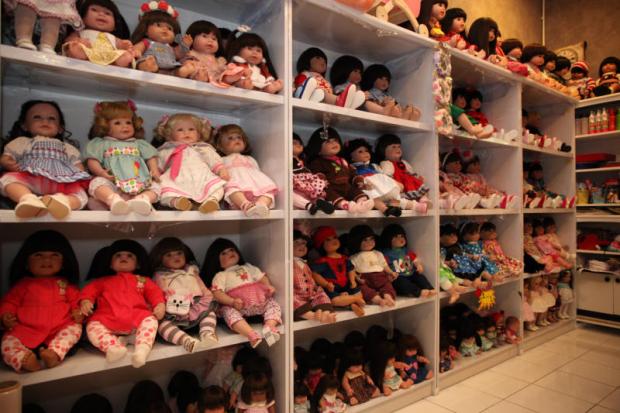 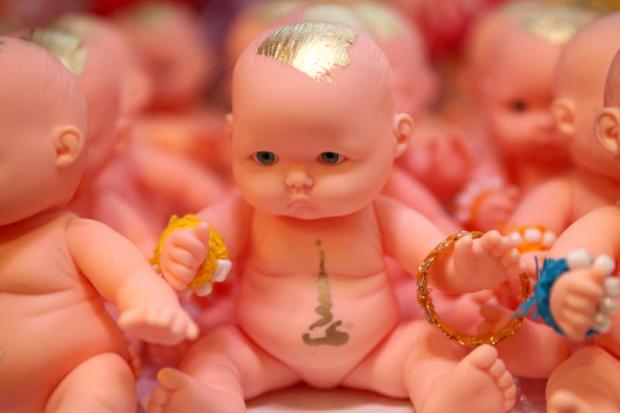