At Wat Phra That Si Chom Thong in Chiang Mai, experts have been reading and digitising the old temple's palm-leaf manuscripts for weeks. Centuries-old manuscripts at other ancient northern temples -- Wat Phra Singh, Wat Chedi Luang and Wat Duang Dee in Chiang Mai, Wat Sung Men in Phrae and Wat Lai Hin in Lampang -- have been registered and well conserved.

These ancient manuscripts record local history, law, astrology, local tales, faiths and literature. This means that those interested can look at some of the rare texts from the Lanna period at the Digital Library of Northern Thai Manuscripts (DLNTM), which has been online since earlier this month (lannamanuscripts.net). The website presents the digitised forms of manuscripts on almost every topic except "medical recipes" because of copyright concerns.

Visitors have free access to a vast collection of manuscripts from northern Thailand, which total 4,274 and are up to 500 years old. More will be added to the library to eventually bring the overall total to around 7,000 manuscripts. Included in this digital library are the microfilm collections and the handwritten copies that were digitised in 2013 in co-operation with the Chiang Mai University library with support from the German Foreign Office. This digital library project is funded by the Henry Luce Foundation, the University of Pennsylvania and the Andrew W. Mellon Foundation and implemented by the National Library of Laos.

All these projects are the result of over four decades of hard work by German academic Prof Harald Hundius, who is now the DLNTM Local Project Leader. 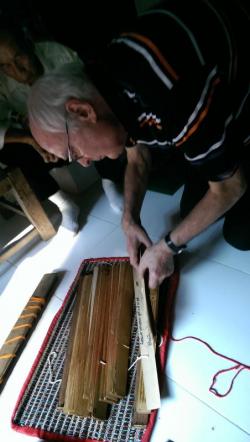 David Wharton, DLNTM technical director, said: "We are hoping to do more digitisation. The temples have been taking very good care of their manuscripts. There have been some losses in these temples, such as being borrowed but never returned, or damaged by termites or fires. Digitisation is to make them widely accessible and studied by the public. We want the public to have more ideas about preservation."

The first comprehensive survey of Lanna manuscripts in the eight northernmost provinces of Thailand was conducted from 1971 to 1974 by Prof Hundius within a project financed by the German Research Foundation. Prof Hundius was a professor of Thai and Lao languages and literature at the University of Passau, Germany, from 1993 to 2004. He has been implementing manuscript projects at the National Library of Laos since 1992.

Back in 1970s, Prof Hundius applied for a scholarship from the German Research Foundation to study Thai manuscripts for three years. He went to the North of Thailand and studied the Lanna language with local scholar Singkha Wannasai, a guru of the northern language, in Lamphun every day. In the third year, he was able to read northern Thai manuscripts.

"I still remember the sight of 15 northern people sitting at Wat San Rim Ping, unwrapping manuscripts, reading for each other and laughing. I was curious and tried to read the story. Finally, I understood the story after half-a-year. The script was very difficult. I wanted to study more and more," the 77-year-old Prof Hundius recalled.

In 1974, the professor returned to Germany and brought back records of 1,300 manuscripts from Thailand for studies. Between 1982-1985, he helped set up a master's degree programme in the northern language at Chiang Mai University. He initiated and participated in the Preservation of Northern Thai Manuscripts Project (PNTMP) which began in 1987. In 1990, he completed his post-doctorate research in northern Thai literature.

During 1987-1991, another 400-plus rolls of microfilm containing about 4,200 primary sources of the Lanna tradition were produced. Microfilming was conducted with documents stored at 53 selected temples throughout Thailand. All photographic work took place in the temples and no manuscripts were removed. After microfilming, they were carefully rewrapped and put back into their original storage. The whole process of preparing and microfilming the often extremely fragile documents was also used for providing training for local volunteers who engaged in these works.

Prof Hundius said he took photos of more than 1,000 old manuscripts at temples in Phrae, mostly at Wat Sung Men in Phrae where he spent around 15 months.

Phra Khru Wipulsoraphan, the deputy abbot of Wat Sung Men, said the team led by Prof Hundius microfilmed the manuscripts in 1987 and another team counted and checked them based on the first team's list in 2007 when the temple's long-lost tak dhamma tradition was revived. The tradition was initiated by a former abbot about two centuries ago for locals to count and clean the temple's manuscripts and give the temple new manuscripts around the second lunar month.

Currently, Wat Sung Men has the Manuscript Museum and two manuscript libraries for storing the Tipitaka and many other manuscripts. The Manuscript Conservation Association plans to help the temple submit the proposal for listing the temple's palm-leaf manuscripts on the registry of the Unesco's Memory of the World Programme in the future.

The team also microfilmed the North's oldest palm-leaf manuscript dating to 1471 at Wat Lai Hin in Lampang. It tells the Jakata stories of Lord Buddha's many previous lives as humans and animals, as well as about the Five Precepts and Eight Precepts of Buddhism.

During 1992-2004, Prof Hundius operated the Preservation of Lao Manuscripts Programme based on the example from Northern Thailand using subsidies from the German government.

In 2007, the University of Passau and National Library of Laos received a grant from the German Research Foundation for a three-year project to digitise a microfilm collection of 12,000 manuscripts in Laos, and to make them available online in the Digital Library of Lao Manuscripts. By 2011, when applying for a similar grant for the Digital Library of Northern Thai Manuscripts, the foundation had restricted funding for digitisation to manuscripts kept in Germany only. Fortunately, the German Federal Foreign Office has supported the digitisation component of this project (from microfilm and from original manuscripts) from 2013 until May this year. After May, the Manuscript Conservation Association in Thailand will help send some members to continue digitising old manuscripts in northern temples.

The German Foreign Office's Cultural Preservation Programme (CPP) has spent around €1.4 million (550 million baht) funding a large variety of projects in Thailand over the past 35 years. It has funded the Preservation of Northern Thai Manuscripts Project and subsequent digitisation of microfilms and direct digitisation of manuscripts with a total of €730,000 since 1987.

Phibul Choompolpaisal, secretariat of the Manuscript Conservation Association, considered the manuscript conservation projects led by Prof Hundius as an inspiration for other people, saying the project was impressive though the team has microfilmed or digitised only 40,000-50,000 of all about 2 million fascicles (phuk in Thai) of manuscripts in Thailand. 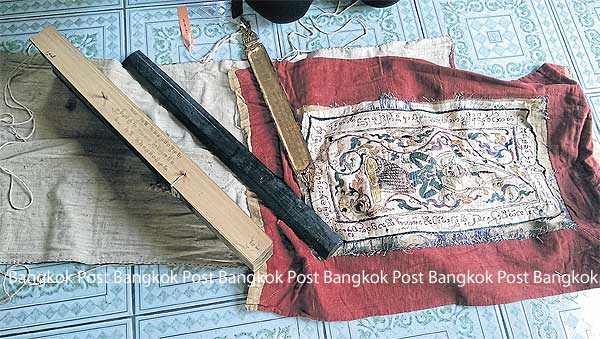 According to him, the Fine Arts Department has surveyed and catalogued manuscripts from only a few temples in each of over 30 provinces. These include several royal temples in Bangkok, for example, the Temple of the Emerald Buddha, Wat Bowon Niwet and Wat Rachathiwat and others. In Thailand, there are approximately a total of 2 million phuks. This will take a long time to work on due to a lack of staff.

Boonlert Sananon, president of the association, said about 10% of all the old manuscripts in Thailand has been registered by the Fine Arts Department's Manuscripts and Inscriptions Group since 1975.

According to him, any documents older than 100 years are considered ancient objects and protected by the 1905 Ancient Sites and Objects Act and the 1941 Ancient Documents Act.

Boonlue Burarnsarn, an ancient language specialist, said the department has saved many old documents since 1975, but it was too late to rescue many others from termites at certain temples.

David Wharton, DLNTM technical director, said about half of the manuscripts surveyed by Prof Hundius' team have disappeared or been destroyed by fires or termites. Some temples, such as Wat Ban Luam, were lucky to have their manuscripts microfilmed before fires.

Phra Palad Arthit Apiwatthano, abbot of Wat Duang Dee in Chiang Mai, recalled that about 30 years ago the project was very good at helping this temple keep more than 900 titles of its palm-leaf manuscripts in good condition.

The monk also praised the digital library project for allowing the general public to study art and culture from palm-leaf manuscripts. It will also help spread Buddhism with the help of the internet with no need to visit temples.

Phra Thammangalajarn, the abbot of Wat Phra That Si Chom Thong who presided over the publication of the Tipitaka in the Lanna language, acclaimed the manuscript digitisation and digital library projects as a great merit, saying: "Providing dhamma is the greatest giving of all."

A paradigm shift in cancer care