Laurie "Truck" Sams is a one-legged man on a 10,000km cross-country cycling mission. 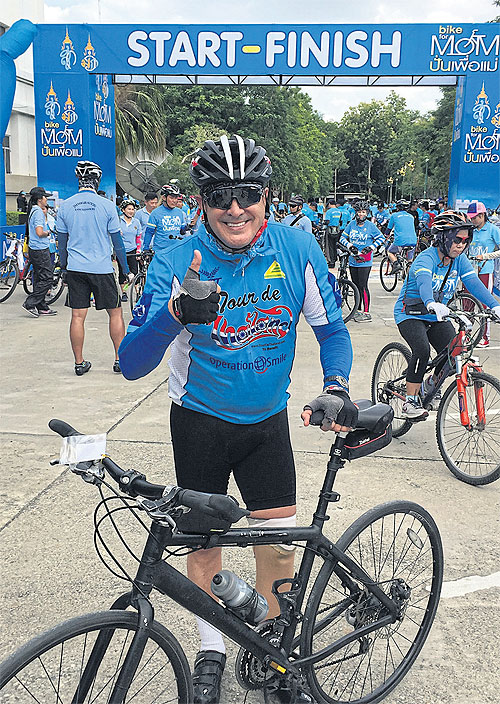 The 67-year-old former Australian special-forces soldier plans to bike from Vietnam to Australia to raise awareness of the 50th anniversary of the Australian Task Force's involvement in the Vietnam War. His journey -- on which he'll travel through Vietnam, Cambodia, Thailand, Malaysia, Singapore and Australia -- will also raise funds for Australia's wounded veterans, who don't get government assistance for post-traumatic stress disorder, as well some of the wounded who served in Afghanistan and Vietnam.

The Asian leg of "The Long Ride Home" starts on May 12 from the Australian Embassy in Hanoi and ends in Singapore on Aug 26.

"I decided to do the ride from Vietnam because I was there serving myself and I'd lost mates and friends there. Some are still suffering from their time there."

Sams -- who describes himself as a Forrest Gump-like figure -- lost his leg saving the life of a parachute student attached to him in a tandem sky-dive.

"I'd had a double malfunction and I had this student strapped to me but lower than me and I had basically half a parachute. We were spinning and rotating to the earth and I got the parachute to cut vertical, falling in a straight line down.

"I got the student to pull his knees and legs up, pulled him close to me, and took the impact of two people, and that just blew my foot straight off. Boom. Like standing on a landmine.

"I'd busted my other foot, as well. I had bones sticking through the boot on the ankle, but that was the minor injury."

Sams was hospitalised for four months -- the student didn't receive any injuries -- and was subsequently awarded the Australian Star of Courage, one of the highest bravery awards in Australia.

He says living in Vietnam and cycling off the beaten track has helped him heal in regards to being a former Australian special force soldier in the Vietnam War. Sams served 12 months.

"Being a force soldier, it had its moments. I was young, so to me it was quite full-on. I never wanted to go back until I did my bike ride, and part of the healing process for me was going back."

Ever since 2007, Sams has gone back to Vietnam twice every year to ride.

"I don't regret having served there, but for me, going back and meeting my former enemy -- if that's the word to use -- has been a healing and forgiving process. I've met a lot of former Vietnamese soldiers, and we've talked about our times there, and they're in the same situation as myself -- they went through a lot of suffering, regret and forgiveness."

Cycling 10,000km is a big challenge even for those with two legs. Sams says he trains twice as hard and trains about 500km a week. "I have a special pedal with a strap, and I put my foot in a cup and strap myself in like a rodeo rider on a horse. And if I fall, the bike falls -- I go with it so I don't lose my leg, which has happened before. So I've locked in my leg and I'm locked into the pedal myself."

Coach JJ from JJ Cycling Bikefit in Bangkok, says he knew getting a bike sorted out for Sams would be a challenge.

"With the distance and duration Laurie was planning to do, comfort would be essential not only for his prosthetic leg but his whole body. As Laurie has no lateral movement around his lower left leg, we needed to ensure that he had sufficient balance and comfort on his saddle and handlebars, by raising his bars and lowering his saddle to take any undue pressure off his leg," he said.

"I have no doubt Laurie will complete his challenge -- he is one of the toughest guys I've ever met, and a true gentleman."