From Oslo to Seoul one Thai street artist has taken on the world, and is eyeing bigger things.

published : 8 May 2016 at 04:00
newspaper section: B Magazine
writer: Chaiyot Yongcharoenchai

Patcharapon "Alex" Tangruen found art school a stressful experience. His head was being filled with art theory he had never contemplated, and he felt he was being dragged away from the simple act of drawing he had shown a gift for since the age of three.

One night during his second year, a friend cajoled him into leaving the dormitory and heading out on the town with a spray can. While graffiti had become trendy among young artists at the time, Alex had never been tempted before and had no idea what he would create. They came across an abandoned car in a field nearby, and Alex sprayed his name on one of the doors.

"It actually felt really good," he said. "I remember the first feeling when I sprayed paint on that car was a big relief. Whatever problem I had on my mind at that time seemed to go away. I used this as a way to relax after a tough week at school."

That young man is now Alex Face, the 34-year-old Chachoengsao-born street artist whose work is widespread within Thailand and becoming well-recognised all over the world.

His signature creation is a child known as Mardi, who is painted wearing a fluffy outfit or dressed as a cute animal, with a third eye always on guard. The eyes range from sleepy to suspicious, and the child appears in all manner of poses and situations in public locations from Charoen Krung Road to Oslo.

The first signs of Alex's talent came at the precocious age of three, when an uncle gave him his first set of crayons and he was able to reproduce the animals from his storybooks. At school, his skills developed faster than his peers and he entered a number of art contests. 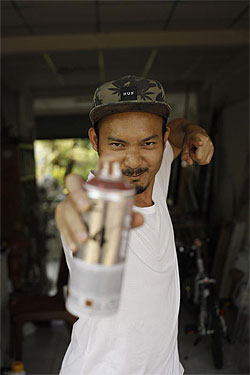 Art was a focus of his studies in junior high school, and by the time he finished Mathayom 3 he had so many awards and creative ideas he convinced his parents he should study at a technical college. Taking a fine arts course rather than senior high school set him on a path to King Mongkut's Institute of Technology, where he learned different ways to paint.

He found college much more intense and difficult than he expected, which led to his stress-busting adventures with a spray can. Alex continued to paint graffiti until graduation, using it as a way to escape from reality.

After graduation came the task of figuring out how to turn his natural gift, and the skills he had learned, into a way to earn a living. At the time, however, Alex was more interested in riding his skateboard and painting graffiti all day.

He would work to earn money, then stop as soon as he had enough to travel and support himself. At one point he worked as a member of a film production crew, but it didn't take him long to realise his heart wasn't in the work.

At the age of 23 he quit the film crew and entered the monkhood for four months, thinking the time would be useful for figuring out what to do next and how to earn a steady income.

After shedding the saffron robes, he spent 5,000 baht of his savings on a rented space at the Chatuchak market where he sold paintings on canvas -- with very limited success. His sales picked up towards the end of the rental contract, but they only totalled 20,000 baht.

Alex made a second attempt at the Suan Lum Night Bazaar, where he followed his friends into the sale of abstract artworks. While his peers were successful, Alex was not -- he was creating pieces he thought could earn him money, but which he had no passion for. It would prove a valuable lesson -- he gave up the space and decided he would only create art he was passionate about. >>

After living life just for himself and exploring his passion, another change was in store when he turned 27. His girlfriend told him she was two months pregnant.

Alex says he was instantly more serious about saving money for his family, and created a lot of artwork in different forms, including painting and sculpture. This allowed him to save enough to pay hospital bills and also got him thinking about how he could move from graffiti to serious street art. 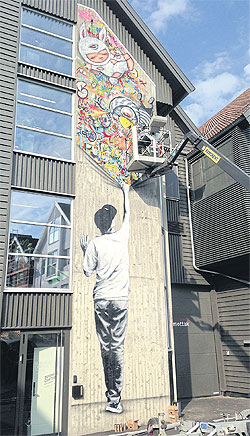 FACE OFF: Alex Face in his studio at home in Bangkok. Above and far left, his art in Nuart, Norway and Amsterdam.

Having long sprayed his name on walls, Alex changed to painting his face -- which earned him his nickname. Over time, he incorporated the techniques he learned at art school and expanded to spray-painting images of animals in public locations. "Graffiti is a way of expressing myself and my identity. So I used this approach to build my own brand," Alex explained.

His street art is designed to look like an oversized brush has been used on a large canvas, with the spray-paint deliberately soft enough to resemble gallery paintings.

The work was eye-catching and Alex Face became well-known. In 2013, an organiser of a street art festival in Yangon invited him and his friends to create artwork. They visited Yangon for nine days and, on return, he was invited to visit South Korea and London.

In 2014, Alex flew to Norway to teach street art to young people, after which he spent almost three months travelling around Europe creating work in every town he visited. He returned to Thailand as the tour left everyone exhausted, especially his young daughter. The experience, however, opened his eyes to the possibilities of creating more amazing work.

The character Mardi is inspired by his daughter. He looks at children as victims of society, who can easily be violated or threatened by what is around them in their everyday lives.

One of the most notable features is the third eye in the middle of Mardi's forehead, which always looks in the opposite direction of the child's eyes. He paints the third eye as a way for the character to look out for danger and said it can be compared to a parent's watchful gaze.

"The third eye is also an Eastern concept," he said. "We do have that in our culture. Since I display my works in other countries, I want them to contain a bit of an Eastern perspective."

Despite this, it is not always possible to incorporate the third eye -- it can have unintended consequences in some other cultures. For example, one work in Penang features Mardi without the third eye -- locals had explained to him that it was the sign of the devil.

Alex's latest creations can be seen in Phuket, although one will be removed this week following complaints about it being painted on a heritage building. The removal, set to be filmed, will feature in a major exhibition he plans for the end of the year, which will also feature interactive art.

Street art is always a product of its location, so it remains to be seen how Alex Face's creations will translate to a gallery setting. Where, exactly, is still to be determined, but with a creation so attractive and popular -- and featured on products from mugs to Converse shoes -- the show is bound to draw eyeballs.

Until then, and despite being the centre of controversy in Phuket, he is finding inspiration in nature and culture outside Bangkok. He's even thinking about remaining in Phuket as a way of sparking his creativity. Whatever happens, he will keep spraying. 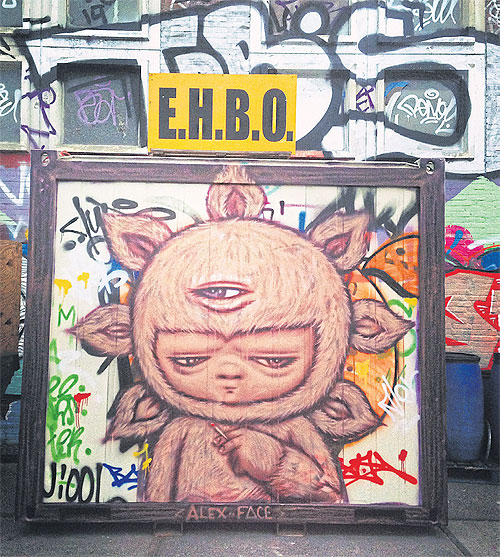 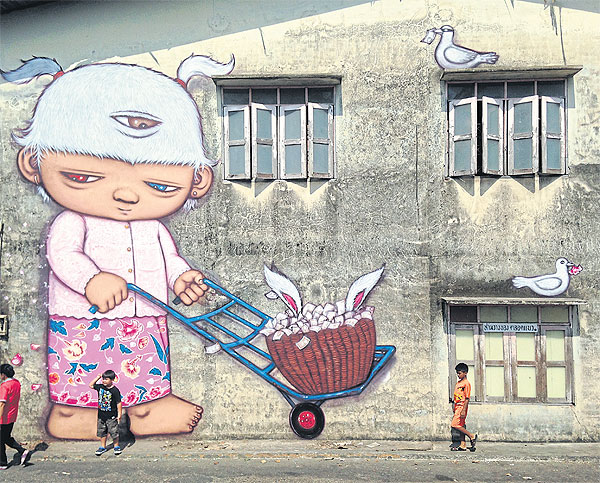 GLOBAL SUCCESS: Murals by Alex Face in Phuket, above, Perth, Australia, and Seoul, South Korea, below. 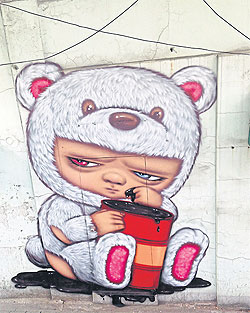