Speaking on the occasion of Visakha Bucha Day is Dhammananda Bhikkhuni, who is fighting for women's rights to serve the religion

When faced with adversity, Dhammananda Bhikkhuni, formerly Assoc Prof Chartsumarn Kabilsingh, draws her strength and inner peace from the teachings of Lord Buddha. Her parents have also influenced her to be disciplined, resolute and caring -- traits that have brought her friends as well as foes throughout the years.

Dhammananda is recognised as the first Thai bhikkhuni (female monk) to be ordained in the Theravada tradition from Sri Lanka. Her mother, Voramai Kabilsingh, was the first Thai women to become a Mahayana bhikkhuni in 1971. Her grandmother was also a white-robed nun. Now 71, Dhammananda was in her 50s when she began her monastic life. Prior to that, she was a university professor, teaching philosophy and religion for nearly 30 years at Thammasat University.

It is a well-documented fact that the struggle to establish Theravada Bhikkhuni Sangha in Thailand has faced immense opposition from state authorities, especially after her ordination 15 years ago. One controversial argument against bhikkhuni ordination is that it must be performed by both male and female monks. Since female monks are thought to be "extinct", or at least there are no officially recognised bhikkhuni in Thailand, the ordination is technically impossible.

Bhikkhuni supporters refute this argument, however, and insist that the teachings of Buddha permit monks to ordain women and that this rule still applies now. Part of the ordination ceremony involves answering embarrassing questions on gender and sexuality to ensure that people entering ordination are eligible. In the past (when there were still female monks in Thailand) it was seen as inappropriate for male monks to pose those questions to women, so female monks would instead pose the questions to the women in a separate ceremony to prepare. Later, the monk would perform the real ordination.

While there is greater support for bhikkhuni ordination among the public today, authorities have yet to show any sign of letting down their defences on this issue, so they are still not officially recognised in Thailand.

As a bhikkhuni, Dhammananda is hopeful for change. If not in this coming decade, then the next or maybe even the one after, as the campaign for women to be allowed to become female monks intensifies. 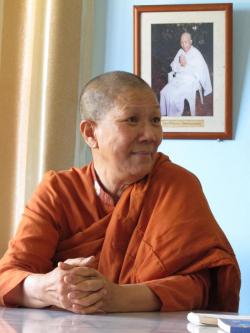 There is a cool and collected, steadfast demeanour about Dhammananda, who heads the Songdhammakalyani Bhikkhuni Monastery in Nakhon Pathom province. Whether her enlightened state of mind is the reason behind her ability to remain content in the midst of adversity is anyone's guess.

It is Buddha that established the four pillars of Buddhism -- monks, female monks, male disciples, female disciples -- she remarked.

"The scriptures are very clear on this issue, so I do believe that in the past 15 years opinions on this matter are beginning to change," said Dhammananda. "People that still have an antagonistic view do so due to ignorance. Some believe that the lineage of Thevarada female monks was lost years ago, they insist we are extinct, so we don't have a legal status."

In the last decade, Dhammananda has been writing books on this subject and organising seminars and round table discussions to better educate everyone involved on better understanding the bhikkhuni situation in Thailand.

"The government structure is still not accepting of us, while the public are equally divided on our legal status," she added. "I feel the ones that totally disagree with our presence are few. Through the years, people have also become more educated on the matter."

Dhammananda said she is glad to report that today, despite having to travel to places like Sri Lanka to get ordained, there are 100 bhikkhuni in the country spread across 20 provinces. They all come from a diverse background, with one thing in common -- they are all highly educated.

Local support has also increased, she noted, adding that to truly enjoy public acceptance one has to gain their love and respect through being a good friend and neighbour to them. Dhammananda is often moved to tears by the love and admiration she receives from the communities where she goes to collect alms.

Other bhikkhuni haven't been as fortunate. There have been instances where, although properly ordained, they have been treated unjustly, she said, and that human rights officials were then notified about the incident. 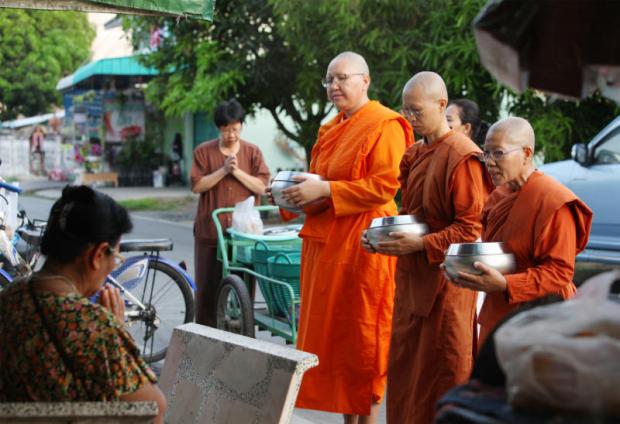 Bhikkhunis receiving alms in the neighbourhood.

Dhammananda realises her fight for recognition of female monks is an uphill battle. She does not search for emotional support from people, due largely to growing up as the only biological child of her parents. Aside from her faith in the Buddhist text passage "one who follows dhamma, dhamma will protect", she has been grateful for the mentorship of close acquaintance Joan Halifax, an American Zen Buddhist teacher.

"Joan, who I consider a dhamma sister, once visited me during the beginning of my monastic life. A time I was feeling spiritually low. She was very supportive and gave me the idea of building a statue of Mahapajapati, Buddha's aunt and foster mother, as well as the first Buddhist nun," recollected Dhammananda.

"I needed that visual to build my spiritual strength. Joan spent time counselling and mentoring me."

She puts much of the emotional, material and financial support she has received from outsiders so far down to divine providence, crediting this to her sincere faith in the teachings of Buddha. She feels a strong presence of a divine being taking care of all her needs.

"We have to trust Buddha with every aspect of our life. I know I am not alone, I need not worry because someone is looking over me." Dhammananda said if there is one thing she learned from her mother on how to deal with obstacles in life, it was to focus on education and never give up on issues she feels strongly about.

Her late mother published a monthly magazine, which she helped put out for 32 years.

"She used this as a tool to educate the public about Buddhism and of course the bhikkhuni issue," said Dhammananda. "My mother taught me never to give up. She told me that each problem in life had an answer. She always encouraged us to try. My father on the other hand was highly disciplined and a people person. My strong character comes from the parents I had."

It has been known for some nuns to perceive bhikkhuni as inferior to their male counterparts. Dhammananda said that while she hadn't personally encountered this herself, if it does happen it is most likely because those nuns are not yet sufficiently grounded in Buddhist spiritual training. When a person is grounded in the teachings of Buddha, issues such as deference and showing varying degrees of respect for a superior are of little significance, she said.

Dhammananda believes that the presence of bhikkhuni in Thai society has also had a positive influence on the public, and there are well-known examples of many visiting prisons and helping emotionally-scarred people.

One female prisoner requested Dhammananda to bless her unborn child by putting her hand on the pregnant women's stomach. The woman also asked if Dhammananda could name her baby after its birth. On Mother's Day, bhikkhuni represent the maternal figures that many of the inmates don't have or have been estranged from, she said.

Asked to share a few words for Visakha Bucha Day, she said: "Today we celebrate the birth, enlightenment and death of Buddha, who showed us that enlightenment is possible. Each of us has the potential of becoming enlightened. So how do we start? Well, by simply realising this potential. The desire to take this path is important."