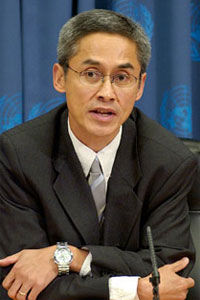 Ukraine, the UN and the ties that bind

The United Nations (UN) represents the pinnacle of the post-Second World War system. But just how effective is it today in the face of the crisis facing Ukraine, triggered by its next door neighbour Russia?

Gateways for action on Myanmar crisis

The coup in Myanmar in 2021 brought back to power a junta-based regime and compounded grave violations, adding fuel to a recurrent crisis. A constructive gateway for action in December 2022 was thus the adoption of the UN Security Council (SC) Resolution 2669, the first substantive resolution highlighting urgently needed measures on the issue.

While the Asia-Pacific region is home to a wealth of constructive traditions and practices, it is also confronted with the conundrum of how to protect freedom of expression at the same time as tackling hate speech which is rampant today. A morass of laws of a prohibitive and inhibitive kind are emerging, entrenching censorship and self-censorship, especially in the face of more authoritarian trends, rather than a broader range of actions to respect a diversity of opinions and to counter incitement to hatred.

Between rule of law and law of rule(r)s

The term "rule of law" has a resonant ring which sounds both familiar and distant. It seems familiar because it is employed frequently by lawyers to analyse the makings of a legal system. Yet, it is distant because it sounds "legalese", harbouring both the thin version and the thick version of its intrinsic self. The thin version covers various legal safeguards for litigants and accused persons, such as a fair trial, accompanied by the advocacy of an independent judiciary. The thicker version demands more, namely: adherence to human rights and democracy.

The challenge of climate change and environmental degradation is an existential threat which is increasingly recognised in all corners of the globe. Its urgency is all the more pressing because it harbours ill for our children and the next generations in terms of their survival and modus vivendi, unless comprehensive action is taken, anchored on the "whole of humanity and whole of society" approach and premised on effective global-local partnerships to prevent, reduce and rectify harm.

Rights under threat from emerging tech

A key challenge facing human rights globally today is the advent of emerging technologies that mutate rapidly and potentially beyond human control. The UN Human Rights Council in Geneva has thus singled out for special study during the next couple of years four areas of concern: autonomous weaponry, neurotechnology, cyberbullying, and green technology (inevitably linked with climate change). What are the prospects for enjoying the fruits of such technologies and pre-empting their negative implications?

Thailand is heading towards national elections next year, and this is an opportune moment to ask how much room there is for the participation of youth in politics. The record to date has been ambivalent, and much depends on both political and social will to broaden the civic and political space.

In 2009, Asean established a long-awaited regional human rights body in the form of the Asean Intergovernmental Commission on Human Rights (AICHR). This commission has now undertaken a self-assessment of its work in recent years, and it covers some of the innovative measures identified below. Complementary to AICHR, there also came into being the Asean Commission on the Rights of Women and Children (ACWC) and other sectoral bodies.

How to invigorate multilateralism

Multilateralism, embodied in the United Nations (UN) as the world’s primary body for fostering international relations and international law among all countries, has been the mainstay of global history since the World War II.

This region has been in the news in recent weeks in regard to online scams and human trafficking, compounded by other forms of exploitation such as forced labour and forced criminality.